They may not all be winners, but the sheer number of Democrats running for Congress so far greatly improves the odds of a donkey takeover of the House next year. Photo-Illustration: Daily Intelligencer; Photo: Getty Images

The slowly approaching 2018 midterm elections are the first test of the political durability of the GOP’s control of Washington, and Democrats are anxiously scanning the horizon for signs of a gathering wave.

“Wave” elections — those that produce a large swing in votes and congressional seats for one party — tend to develop slowly. There are a few factors that tell us if the weather is right for a wave election: They most often occur during midterm elections under unpopular presidents, when previous waves have given his party an unnaturally large number of seats. While conditions are right at the moment, it’s hard to forecast whether they’ll still be favorable in November 2018. One important factor, however, can be seen from a considerable distance: Are Democrats running in enough places to make broad gains possible if conditions are ripe?

A new study of campaign-finance filings from the Brookings Institution suggests Democrats are running for the House in unprecedented numbers: There were 78 early Republican challengers who had raised at least $5,000, which presaged the wave election that gave the GOP majority control in 2010. Democrats have 209. And these candidates are spread across the map, too: In 2009, the Republicans had mustered 50 legitimate candidates to challenge Democratic incumbents. The Democrats have doubled that. 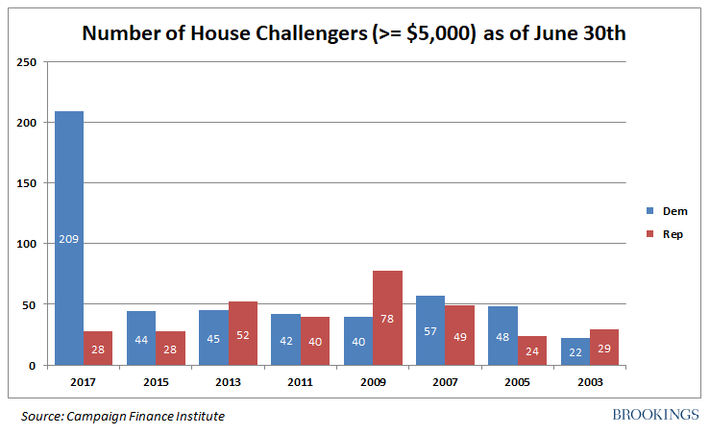 Contesting a wide swath of House districts does not itself produce a “wave election.” But it does mean Democrats will likely be in a position to take full advantage of the opportunities that may exist.

In a discussion of this data, Kyle Kondik notes that at present there are probably not enough highly vulnerable GOP House seats to produce a Democratic takeover, using the House ratings published by Larry Sabato’s Crystal Ball:

[T]here are now 26 Republican districts in the competitive Toss-up and Leans categories … So Democrats can look at that list and say that if they can win the Toss-ups and Leaners, they will win the House because they need to net just 24 seats to take control. That’s technically true, but, as argued above, it’s not really realistic: Even in a horrible GOP year, Democrats won’t sweep all of the top-tier races.

But while there’s probably a ceiling on the share of competitive races the Democrats can win, if a wave is really developing, more and more races will become competitive.

Crystal Ball rates 28 additional GOP-held House seats as “Likely Republican.” It will not take too many of those moving into the “Lean Republican” or “Toss-Up” categories to make a Democratic House a much better bet. And that, in fact, is how waves usually develop: Relatively safe incumbents suddenly are in trouble, and others retire rather than face the ignominy of defeat.

In looking at House race ratings from Crystal Ball, the Cook Political Report, or other credible handicappers, the thing to watch may be how many vulnerable seats are held by each party (at the moment, only nine Democrats join the 26 Republicans in Crystal Ball’s list of toss-up or lean contests). If they are overwhelmingly Republicans, a wave could be on the way, particularly if, as seems to be the case, Democrats are conceding less ground and running more candidates than ever.