Donald Trump appears to set regulatory policy on a kind of reverse-utilitarian calculus, working diligently to do the greatest good for the smallest number. With the help of the congressional GOP, the president has made it easier for coal companies to dump mining waste in streams; given financial advisers the right to scam their clients; and made companies that routinely abuse their workers eligible for federal contracts again.

But with its latest deregulatory endeavor, the Trump administration has taken this governing philosophy to new heights: The White House appears to have found a way to put the profit margins of select coal companies ahead of not merely environmental conservation, climate sustainability, and federal taxpayers, but also coal miners in Appalachia.

Early in his tenure, Trump reversed the Obama administration’s moratorium on leasing federal lands to coal companies, and canceled its proposed study on the environmental impacts of the coal industry. But Trump’s Interior Department doesn’t merely want the public to blindly absorb the environmental costs of fossil-fuel extraction on public lands — it also wants us to subsidize the financial costs of such activity. Late last week, the administration filed a repeal of an Obama-era measure designed to increase mineral royalties on federal lands. Or, more precisely, Trump moved to reopen loopholes that allow coal companies to avoid paying their full dues to Uncle Sam. As the New York Times explains:

Under federal rules adopted in 1920, coal companies are required to pay “not less than” 12.5 percent on sales of surface coal mined on federal lands. But for years, studies indicate, the companies paid far less — as little as 2.5 percent of the ultimate sale price — because they often negotiated large royalty discounts with sympathetic federal officials. Companies also often sell coal first to a corporate affiliate at a sharply reduced price, before reselling it to the intended customer, costing the government a chunk of its royalties, according to the Government Accountability Office study. The technique was particularly popular among mines with foreign buyers.

To eliminate the loophole, the Interior Department adopted a rule last year requiring that the payment be calculated on the first arm’s length transaction, meaning sales to corporate affiliates would not count. Such a change would be a blow to the bottom lines of companies mining in the Powder River Basin, which accounts for about 85 percent of all coal extracted from federal lands, with a growing share headed to Asia.

Interior Secretary Ryan Zinke fought this rule (on behalf of his coal-industry donors) while in Congress, and is now using his federal perch to finish it off.

Given the reality of manmade climate change, it’s more than a little insane that our government would lease any publicly held land to companies looking to extract the dirtiest of fossil fuels. The idea that we would provide it to them at a discounted rate is awe-inspiring in its madness; it is that rare breed of energy policy that manages to simultaenously undermine humanity’s long-term survival and Appalachia’s near-term economic prospects: In 2015, the Center for American Progress found that the coal industry’s ability to lease federal lands at below-market rate was “giving coal companies that mine in Western states an unfair advantage over companies that mine in Appalachia,” where most mineable territory is in private hands.

New Mexico, California, cattle ranchers, and the Cheyenne tribe are all fighting the Trump administration’s regulatory rollback in the courts. But opposition to the president’s prioritization of energy extraction over environmental preservation brings together a far broader coalition. 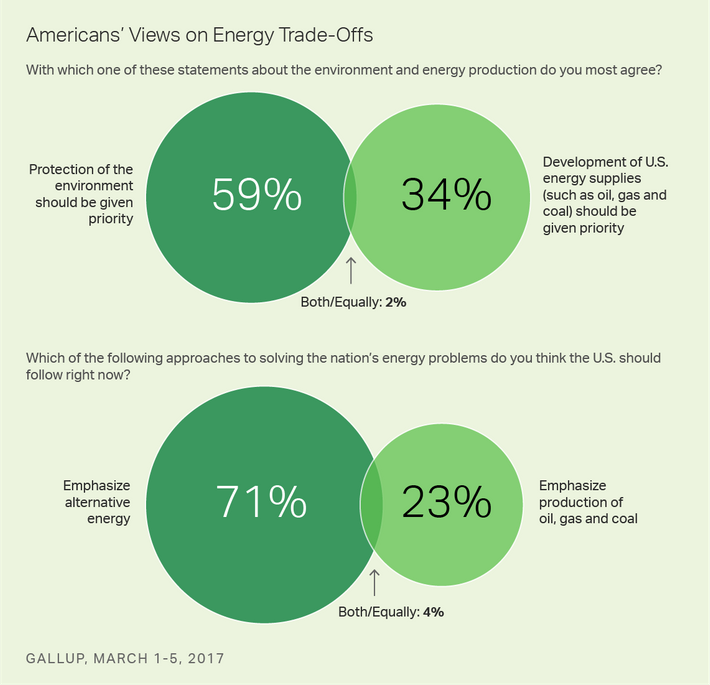 There is nothing “populist” about the Trump administration’s energy policies. We are not subsidizing the despoilment of our federal lands and planetary climate because of the American public’s myopia, but because of their government’s craven corruption.

THE FEED
18 mins ago
brittney griner
brittney griner
The 7 Craziest Facts About Arms Trafficker Viktor Bout’s Career
By Matt Stieb
Getting to know the “merchant of death” the U.S. just sent to Russia in a prisoner swap for basketball star Brittney Griner.
12:01 p.m.
sports
sports
Brittney Griner Is Coming Home From a Russian Prison
By Margaret Hartmann and Nia Prater
The WNBA star is headed home after being released in a prisoner swap for the notorious international arms dealer.
10:18 a.m.
brittney griner
brittney griner
The Queens Lawyer Who Could Help Free Brittney Griner
By Amos Barshad
Steve Zissou (his real name) has spent years softening the image of notorious arms dealer Viktor Bout. His efforts might be about to pay off.

9:16 a.m.
early and often
early and often
Climate Hawks Should Have Given Joe Manchin His Pipeline
By Eric Levitz
Progressives must prioritize expediting the build-out of clean energy over obstructing fossil-fuel development.
8:10 a.m.
the city politic
the city politic
The Queens Native Tasked With Making Legal Weed Work
By Mychal Denzel Smith
Christopher Alexander is building New York’s budding market from scratch.
12/7/2022
early and often
early and often
Letitia James’s Office Is Facing Its Own Sexual-Harassment Scandal
By Nia Prater
The New York attorney general has been accused of handling sexual-harassment claims against her chief of staff differently than those against Cuomo.
12/7/2022
tremendous content
tremendous content
Trump Is Paying His Diet Coke Valet’s Legal Fees
By Margaret Hartmann
The Feds see Walt Nauta as a key witness against Trump in the Mar-a-Lago classified-documents case. But it turns out their bond is the real thing.
12/7/2022
early and often
early and often
It Looks Like the Supreme Court Will Not Blow Up Our Democracy (for Now)
By Jay Michaelson
A theory that would make state legislatures the ultimate decider of elections and overturn the Constitution as we know it gets its day in court.
12/7/2022
early and often
early and often
Guess Where More of Trump’s Stolen Classified Documents Turned Up
By Nia Prater
Hint: they were located among “suits and swords and wrestling belts and all sorts of things.”
12/7/2022
early and often
early and often
Will Biden’s Primary-Calendar Power Play Actually Work?
By Ed Kilgore
There are some obstacles in the road already, and the real implications of the new calendar may not be realized until 2028.
12/7/2022
the far right
the far right
German QAnon Spinoff Plotted Coup to Put Fake Prince in Charge
By Matt Stieb
Police arrested 25 people involved in an alleged plan to overthrow the government and install a disgraced aristocrat as head of state.
12/7/2022
the sports section
the sports section
The Yankees Averted Disaster by Signing Aaron Judge
By Joe DeLessio
Baseball is entertainment, and Judge is an entertainer. The Yankees simply had to keep him.
12/7/2022
early and often
early and often
Raphael Warnock Is the Exception in Georgia, Not the Rule
By Zak Cheney-Rice
The pastor turned politician defied the odds again, but Georgia is still barely a purple state.
12/7/2022
the city politic
the city politic
Meet New York’s New Republican Voters
By Ross Barkan
Crime and schools are causing a political realignment in the city, led by communities of recent immigrants.
12/6/2022
2022 midterms
2022 midterms
Herschel Walker Didn’t Just Lose; Raphael Warnock Won
By Ed Kilgore
Walker was indeed a bad Trump-recruited candidate. But Warnock ran a very impressive campaign once again.
12/6/2022
tremendous content
tremendous content
Rudy Giuliani’s 5 Worst Excuses From His Attorney-Misconduct Hearing
By Margaret Hartmann
The former mayor has offered several bold arguments for why his efforts to overturn the 2020 election shouldn’t cost him his D.C. law license.
12/6/2022
exhibit a
exhibit a
The Trump Organization Was Convicted After a Truly Embarrassing Defense
By Ankush Khardori
Any lawyer would have a hard time convincing a jury of the company’s innocence, but these lawyers acted like buffoons.
12/6/2022
the money game
the money game
5 Takeaways From Three Arrows Capital’s New York Bankruptcy Hearing
By Jen Wieczner
Su Zhu and Kyle Davies are surfing and painting in exile. Also dodging creditors and the law.
12/6/2022
politics
politics
Brian Sicknick’s Family Snubs Mitch McConnell and Kevin McCarthy
By Nia Prater
Family members of a police officer who died following the attack on the Capitol refused to shake hands with Republican leaders at a medal ceremony .
12/6/2022
poll position
poll position
What the Polls Say Today: It’s Warnock’s Race to Lose
By Ed Kilgore
Even polls that showed Herschel Walker leading in November now show Raphael Warnock slightly ahead.
12/6/2022
whodunnit
whodunnit
Somebody Shot Up a Power Station in North Carolina
By Matt Stieb
The identity and motives of the culprits remain a mystery as thousands struggle without electricity.
12/6/2022
just asking questions
just asking questions
How Frighteningly Strong Meth Has Supercharged Homelessness
By Benjamin Hart
Journalist Sam Quinones on the radically transformed picture of drug addiction in America.
12/6/2022
conservatism
conservatism
Why the GOP Will Lose Its War on ‘Woke Wall Street’
By Eric Levitz
Republicans can’t accept that they dislike modern capitalism, so they’re blaming “ESG” instead.
12/5/2022
volcanoes
volcanoes
Volcanoes Are So Hot Right Now
By Chas Danner
There have been some stunning eruptions at volcanoes on multiple continents in the past few days. No, the world isn’t ending.
12/5/2022
early and often
early and often
Yes, Republicans Still Pose a Threat to Democracy
By Ed Kilgore
The 2022 results do not show that the GOP has given up on ruling without majority support whenever it can or must.