One of the many reasons Twitter is a fascinating online platform is that it can bring together thousands of people from wildly different backgrounds, with almost no shared linguistic or cultural references, and force them to scream at each other for hours. Today’s impossibly weird thing people are fighting over is corncobs.

The corncob thing appears to have started last night when Yashar Ali (a New York Magazine contributor) shared an anti–Kamala Harris meme-image on his Twitter account to make the point that “the Bernie Sanders crew” already seems to be mobilizing against the prospect of a 2020 presidential run by the California senator:

Astounding how quickly the Bernie Sanders crew has mobilized against Kamala Harris. pic.twitter.com/ERUuhfFSvw

The meme contains fairly standard left-wing criticisms of Establishment Democrats, and Harris in particular: She’s too cozy with big money, too soft on mass incarceration, and so forth. But curled around her head like a crown sits another, more opaque accusation: that she is a “centrist corncob.” What does this mean?

Al Giordano, an enthusiastic Clinton supporter and Twitter-fight-starter who is probably more famous among the “dudebros” he seeks to criticize than the Democrats he sticks up for, quote-retweeted Ali’s tweet, demanding that “[e]very cretin who has spread this meme needs to reckon with how it uses ‘corncob,’ a rape culture and homophobic term popular among dudebros.”

Every cretin who has spread this meme needs to reckon with how it uses "corncob," a rape culture and homophobic term popular among dudebros. https://t.co/xAKWYMkMNV

And then Neera Tanden got involved. Tanden, who’s suggested that some left criticism of Harris is racist in nature, is the head of the Center for American Progress (disclosure: I worked in their youth-politics department for a couple years a long time ago) and is yet another Sanders-Twitter bête noire, in part because she is seen as part of the, well, corncob-centrist Democratic Establishment whose incompetence (in their view) handed the election to an insane sexual-assaulting galoot.

For some reason, Tanden, who has almost 90,000 followers and who is a major figure in Democratic circles, decided to engage with a random Ohio State student and to demand, in a sentence that is incredibly funny to read when it’s yanked out of context, that she “denounce” some anonymous memester’s use of the term corncob: 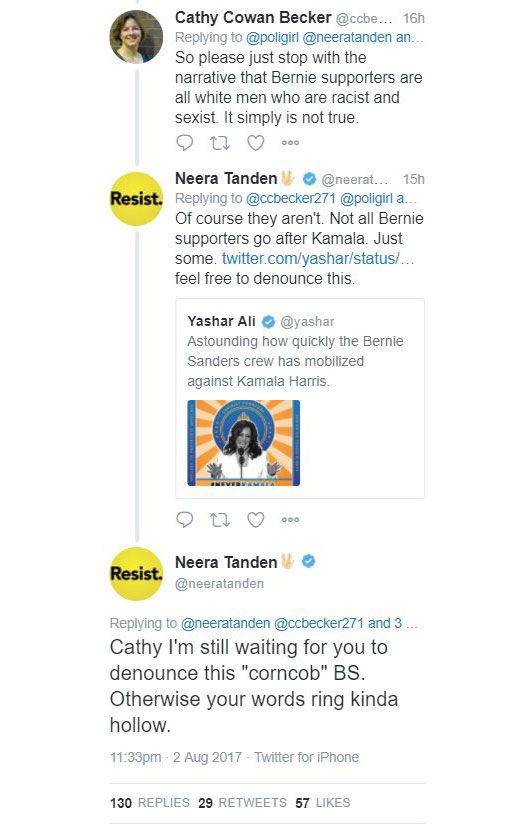 But, wait, okay, what? The casual reader is still totally unclear about what corncob means, or why Al Giordano thinks it’s a “rape culture and homophobic term.”

In fact, if you’re coming to the internet from the opposite end of Giordano and Tanden — if you’re steeped in the jokes and personalities of “Weird Twitter,” from which a lot of the active leftists on Twitter come, corncob means something else. To me — to a lot of people who spend too much of their lives hunched over before Twitter’s hateful glow — any reference to corncob immediately brings to mind a classic tweet by Dril, a brilliant twitter comedian and Weird-Twitter mainstay:

"im not owned! im not owned!!", i continue to insist as i slowly shrink and transform into a corn cob

I’m sorry to be the guy who explains the joke, but: Basically, the tweet refers to a situation in which someone is just getting massively owned (that is, losing an argument or an insult war) on the internet, most likely on Twitter, but refuses to recognize this fact, and instead of apologizing or just going offline for a while, steamrolls ahead, insisting the entire time that they are not, in fact, owned. (See also: “I’m not mad.”)

To corncob oneself, were we to rely on this etymology, is to basically be a self-embarrassing fool. “Centrist corncob,” taken this way, fits into the common left-wing view that centrist Democrats are always trying to twist themselves into positions that (an often purely hypothetical) Middle America will find acceptable. In doing so, they are corncobbing themselves.

But if you’re not familiar with the Dril tweet and a certain adjacent online vernacular, corncob could mean something else. A March 25th, 2012, Urban Dictionary definition, for example, defines corncob differently: “to be screwed over on any sort of in any way. Use of word ranges from buying a used car to being cut off in traffic. It doesn’t take much imagination to figure out it literally means to be fucked in the ass with a corncob.” And there’s at least some pop-culture history that could, I guess, be used to support this definition: In 1998’s Half Baked, when Dave Chappelle’s character’s buddy Kenny, played by the comedian Harland Williams, gets imprisoned, he expresses his fears about getting raped in prison in a, uh, colorful manner that modern-day Twitter would not have reacted well to: “In 11 days I’m as good as skewered! Ever take your clothes off and run backwards through a cornfield?”

Other than that rather indirect reference and the Urban Dictionary entry, though, there just isn’t much evidence for a “dudebro” interpretation of the term corncob, and for what it’s worth, when I asked Twitter whether people had ever associated the term, on its own, with penetration, a bunch of people indicated they hadn’t (no one in the Select All or Daily Intel Slack chat rooms said they had either). I can’t say I’ve ever heard the term corncob used in this way, and whenever I see it, I definitely think of the Dril tweet, not someone being screwed over, let alone violated with an actual corncob.

All of which brings us to today, to the umpteenth online fight between the Bernie left and Hillary Democrats, two Twitter subcultures that are constantly launching all manner of allegations at each other. One couldn’t design a better tweet to kick off another round of Bernie-Hillary infighting, given that so much of that Twitter-war’s history has to do with accusations of misogyny and dudebroness; immediately, the Sanders side started ridiculing Giordano for failing to get an internet reference (one which, to be fair, 95 percent of Americans probably wouldn’t get), and soon everyone was talking about and making really stupid jokes and in-jokes about corncobs, as well as ridiculing Giordano for his Twitter ignorance.

We have this goofy corncob joke intruding on Neera and Al Digiorno's overserious little world.

Jesus died on a corncob for our sins

Because the Twitter-Sanders left despises Tanden, this, of course, inflamed things further, and likely extended the Corncob Affair a few hours longer than it would have otherwise lasted, and, naturally, led to someone messing around with her Wikipedia page:

So that’s where we are now. Is corncob a dudebro homophobic insult? That’s a stretch. Is Twitter terrible? Yes. Is it also funny? Absolutely.