Hey, it’s iOS 11 day! We’ve already detailed some of the stuff you can look forward to — it’s one of the bigger iOS updates Apple has rolled out in the past few years. But! There’s one downside: Some of your apps are basically gonna go away.

You see, back in 2013, iOS 7 brought developers a feature they had been longing for: the ability to develop for 64-bit processors, instead of being restricted to 32-bit development. (Unless you yourself are an app developer, you truly do not need to understand why this is better; just know that app developers were overjoyed.)

Still, plenty of apps had already been developed for 32-bit processors. Apple began to warn users starting with iOS 9 that 32-bit-based apps could slow down their phones, but iOS 11 will be the hard stop. If you’ve got an app on your phone that was developed for a 32-bit processor, it’s probably not going to work very well. Want to see for yourself? Go to to Settings, then General > About > Applications. You’ll see a list like this: 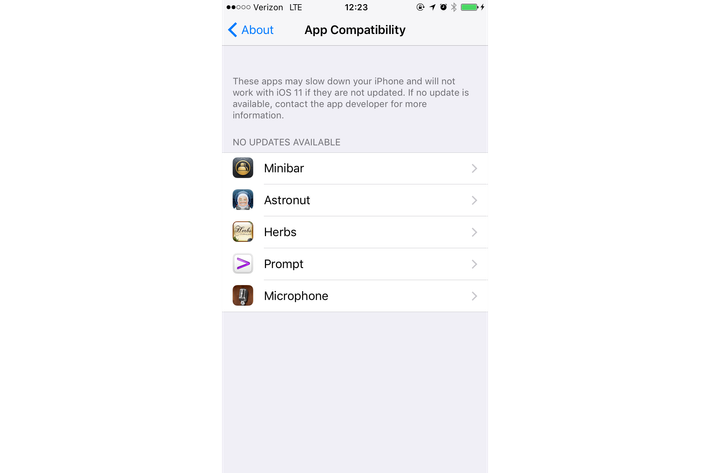 So what are your options if you’re truly loath to give up Astronut? Not much. You can hope the app developer updates their app, but that’s probably not going to happen.

Or you can choose to not update to iOS 11, though eventually this will start causing problems with future apps you want to install, and Apple has all sorts of ways of gently prodding users to updating to the latest version of iOS. But, hey, if you really love Prompt, you gotta do what you gotta do.