Of Nintendo’s pantheon of characters — Mario, Link, Kirby, Donkey Kong — I’m not sure any has been disrespected as much as Samus, the armor-suited star of the famous, beloved side-scrolling space-adventure series Metroid. Unlike Nintendo’s other franchises, Metroid games are few and far between: It’s been 7 years since the experimental Metroid: Other M, 10 years since the last Metroid Prime game (played from a first-person perspective), and 15 years since Metroid Fusion. The company has instead kept to remaking Metroid’s older adventures, giving them a fresh coat of paint, and maybe adding some convenience features that modern players have come to expect. But an installment made from scratch is rare.

This is a shame. The recently released Metroid: Samus Returns, a remake of Metroid II: Return of Samus, is a good game, just as (I assume) it was a good game 25 years ago, and if you’ve never played it before, you’re in for a treat. But it’s impossible not to play it without wondering what could be if Nintendo made a Metroid game that was actually and entirely new, freed from design constraints that remakes inherently possess. 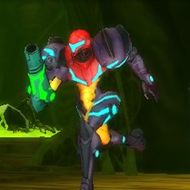 The gist of Samus Returns is the same as almost every other Metroid game: After landing on Planet SR388, Samus is tasked with exploring a sprawling network of subterranean caverns. Her primary task (and really, the only task the game provides) is to kill 40 Metroids, the brain-draining creatures that are always her foil. The persistent monotony of the 40-Metroid countdown is the worst part of the game, but it’s offset by new features. There are skills called Aeion abilities, which make the game smoother without necessarily making it easier, such as a radar-ping system that fills in the map and highlights hidden passageways. They help the game feel propulsive without being condescending (you can opt out of using the Aeion stuff), as does a new teleport system that quickly warps the player to previously explored areas. It also makes you wish Nintendo would just make brand-new Metroid games instead of grafting new parts onto an old corpse.

But lamenting what Samus Returns isn’t is not something worth spending too much time on. The same repetitiveness that the central Metroid hunt of Samus Returns engenders is also, interestingly enough, what makes it a perfect portable game. I could open it up on the subway and immediately know the task required of me (find an unexplored map area, go there, fight boss, repeat), do it, and close the system without losing momentum. That made it easy to pick up and put down frequently, as is often the case during my subway commute. Nintendo’s new console, the Switch, is technically portable, but it’s clear that the Nintendo DS’s clamshell, wholly portable design is better suited for the format of Samus Returns.

And it’ll have to do for now. Metroid Prime 4, the next first-person Metroid game, will be nice whenever it comes. But with any luck, the accomplishments of Samus Returns will encourage Nintendo to put some more muscle into returning to the series’s original format, and fully updating it for the 21st century.

+Comments Leave a Comment
Metroid: Samus Returns Is a Perfect Game for the Subway

THE FEED
12 mins ago
what we know
what we know
Memphis Police Release Horrific Video of Tyre Nichols’s Beating: Updates
By Chas Danner
The footage shows police officers repeatedly striking Nichols, then not rendering aid afterward.
6:46 p.m.
early and often
early and often
Republicans Want Surrender, Not a Deal, on the Debt Ceiling
By Ed Kilgore
There can be no “bipartisan” solution to the debt-ceiling crisis when one party refuses to talk about the revenue side of the ledger.
5:14 p.m.
the talented mr. santos
the talented mr. santos
George Santos Commemorates Holocaust After Lying About It
By Nia Prater
The U.S. representative, who doesn’t actually have Jewish heritage but may have made antisemitic remarks, gave a speech on Holocaust Remembrance Day.