Yesterday, Republican leaders unveiled the preliminary version of their tax-cut plan. Today, the Tax Policy Center, the most credible analytical source, published its study of the plan. And the findings are not good.
The first and largest problem for the Republicans is that their plan overwhelmingly benefits a tiny number of extremely affluent people. In 2018, 53 percent of the benefit of the tax cut would go to the highest-earning one percent of taxpayers. In 2027, when more provisions would be fully phased in, the proportion would rise to nearly 80 percent.

A tax cut that mostly benefits the richest one percent is not going to be popular. Looked at a slightly different way, the richest people in the country would get a huge increase in their living standard — an 8-to-10 percent raise in after-tax income. Almost everybody else would enjoy a negligible increase on the order of one percent of their income. 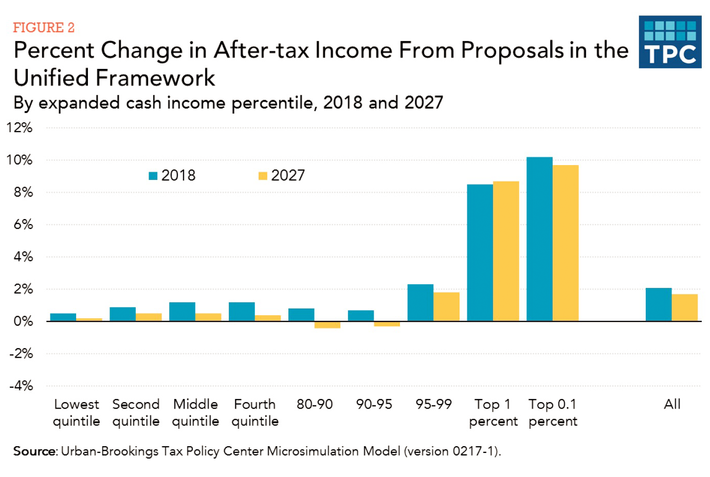 And that’s not counting the costs of the spending cuts that would have to eventually offset the lower revenue.

In theory, that is not an intractable problem, if the GOP can come up with some ways to raise more revenue. The trouble is, their plan already imposes more pain on more constituencies than their slender majorities can probably bear. The largest single revenue-raising element of their plan, raising $1.4 trillion over a decade, is an elimination of the federal tax deduction for state and local taxes — a provision of special importance to residents of states that have income taxes. Eliminating that deduction would create big tax increases for upper-middle-class filers in those states.

Republicans in Congress representing those states are already in an uproar over that provision. Yesterday, National Economic Council director Gary Cohn backed way off the proposal, conceding it was “not a red line” for the administration. But while eliminating that provision would mitigate the “raising taxes on the middle class” problem, it would exacerbate their revenue problem. If they lose the $1.4 trillion this provision would buy them, they need to find it somewhere else, and they’re already short.

+Comments Leave a Comment
Study: Most of Trump Tax Cuts Go to Richest One Percent

THE FEED
5 mins ago
early and often
early and often
The Bush Political Dynasty Ends With a Whimper
By Ed Kilgore
The once-dazzling George P. Bush lost badly to Trump-backed Attorney General Ken Paxton, whom he called a “philandering felon.”
11:55 a.m.
what we know
what we know
Gunman Kills at Least 19 Children and Two Teachers at Texas Elementary School
By Intelligencer Staff
The deadliest massacre of its kind since Sandy Hook.
10:29 a.m.
early and often
early and often
Why We Keep Letting This Happen
By Ross Barkan
A non-exhaustive list includes the filibuster, radical red states, the archconservative Supreme Court, and a toxic national tradition.

10:13 a.m.
early and often
early and often
Trump Dumped Mo Brooks. He Made the Senate Runoff Anyway.
By Ed Kilgore
The January 6 speaker survived Trump’s ludicrous “woke” accusation and will face Katie Britt in next month’s Alabama GOP Senate runoff.
10:13 a.m.
early and often
early and often
The Devil Went Down to Georgia and Lost
By Ed Kilgore
Trump spent the past two years working to exile Brian Kemp and Brad Raffensperger from the GOP, but he couldn’t do it.
9:00 a.m.
early and often
early and often
President Mike Pence Would Be Worse Than Trump
By Ross Barkan
The former vice-president is attempting to bolster his chances in 2024, but Democrats would be wise to beware any attempt to rehabilitate his image.
8:00 a.m.
foreign affairs
foreign affairs
The American Running Rescue Missions in Ukraine
By Rachel Nostrant
Kathy Stickel has pulled dozens of people out of harm’s way by putting herself in it.
7:00 a.m.
plagued
plagued
Welcome to the Next COVID Wave
By Chas Danner
The new wave fueled by the BA.2.12.1 subvariant might not be as big or bad as the last one, but there are still plenty of ways it can go wrong.
5/24/2022
2022 midterms
2022 midterms
Republicans May Have Sabotaged Their Best Chance to Beat Whitmer
By Matt Stieb
Five GOP candidates for governor in Michigan — including the top two contenders — faked signatures to get their names on the ballot.
5/24/2022
adam neumann
adam neumann
Adam Neumann’s New Business Plan
By Kevin T. Dugan
The former WeWork CEO wants to get rich(er) by helping corporations appear more environmentally sustainable than they really are.
5/24/2022
partygate
partygate
Millionth Boris Johnson Pandemic Party Exposed
By Benjamin Hart
Will this be the one that forces his resignation? Nah, probably not.
5/24/2022
early and often
early and often
Perdue Ends Flailing Campaign With Racist Remarks About Stacey Abrams
By Ed Kilgore
The former senator capped off his Trump-inspired challenge to Governor Brian Kemp by accusing the Democrat of “demeaning her own race.”
5/24/2022
games
games
The Most Disturbing Part of the Yankees’ ‘Jackie’ Incident Was the Fans
By Will Leitch
Yankee Stadium picking up Josh Donaldson’s taunt was another example of crowd dynamics gone haywire.
5/24/2022
vision 2024
vision 2024
Democrats Quietly Search for an Alternative to Biden in 2024
By Gabriel Debenedetti
Inside the 2024 soul-searching that’s happening in every corner of the Democratic Party — except the White House.
5/23/2022
new york
new york
Sean Patrick Maloney Is Getting Primaried After Ticking Off Democrats
By Matt Stieb
Progressive state senator Alessandra Biaggi is expected to challenge Maloney after he ditched his own seat to run in a less competitive district.
5/23/2022
politics
politics
House Ethics Committee Investigates Madison Cawthorn for Promoting Crypto
By Matt Stieb
Cawthorn is leaving in January, but he may be in trouble before then.
5/23/2022
life after roe
life after roe
Nancy Pelosi Communion Ban Is a Challenge to Pope Francis
By Ed Kilgore
The Vatican opposes the weaponization of Communion and stopped bishops from barring President Biden. Will Francis intervene on Pelosi’s behalf?
5/23/2022
just checking in
just checking in
So What Is Rudy Giuliani Up to These Days?
By Margaret Hartmann
Trump’s former attorney has been keeping busy by dealing with January 6–related legal woes, making weird videos, and arguing with parade hecklers.
5/23/2022
plagued
plagued
The COVID Vaccine News Many Parents Have Been Waiting For
By Matt Stieb
Pfizer has finally filed for FDA approval for a three-dose COVID vaccine for kids under the age of 5.
5/23/2022
foreign interests
foreign interests
Biden Says U.S. Will Defend Taiwan Against China — or Maybe Not
By Chas Danner
The president’s comment indicated an aggressive change in policy. The White House quickly walked it back.
5/23/2022
religion
religion
Southern Baptists Hit by Bombshell Report on Sexual Abuse
By Ed Kilgore
The ever more conservative leadership of America’s largest Protestant denomination gets a wake-up call about its own sins.
5/23/2022
the city politic
the city politic
Maybe Bill de Blasio Deserves a Comeback
By Ross Barkan
The former mayor stooping to run for Congress is absurd, but a little less so when considering his record.
5/23/2022
early and often
early and often
The Drama-Lover’s Guide to the New Trump Books
By Margaret Hartmann
Love gossip, but not enough to actually read the new batch of Trump books? Here are all the juicy, disturbing, and darkly amusing tidbits you missed.
5/23/2022
the money game
the money game
Buy Now. Pay (and Pay, and Pay, and Pay) Later.
By Scott Galloway
The bill for the finance hack of the pandemic is coming due — for all of us.
5/22/2022

5/17/2022
Cargo Shorts Enthusiast John Fetterman Wins Democratic Senate Race
By Nia Prater
5/22/2022
health
health
What the World Needed Now Was a Monkeypox Outbreak
By Benjamin Hart
Experts say the risk of serious spread is low. President Biden said the outbreak is “something that everybody should be concerned about.”