The ideological vanguard of the Bernie Sanders movement emerged from the 2016 election overflowing with dialectical certainty. Hillary Clinton’s narrow win in the primary was the last gasp of a dying neoliberal order, the overthrow of which is now preordained. This confidence comes through in a short column by Alex Pareene, which asserts that my brand of liberalism is irreversibly dying:

It is overly simplistic to reduce the fight over the identity of the Democratic Party to Joe Lieberman on the one hand and Bernie Sanders on the other, but if, purely as a thought experiment, those were the only two futures on offer, it’s clear which one Jonathan Chait would pick. He would rather belong to the party of Joe Lieberman.

The nice thing is, though, he’s already lost. I’m certain that most Democrats, and nearly everyone in the next generation of Democrats, and even the majority of Democrats who supported Clinton over Sanders in 2016, would reject Lieberman in favor of a more explicitly left-wing direction. Even a majority of people who read and enjoy Jonathan Chait blogs would probably do likewise.

And yet Pareene’s yelps of impending triumph — they go on and on; I have only excerpted a piece of it — contain a curious sign betraying his outward bravado. Pareene identifies my thinking first with Bill Clinton. (I allegedly oppose “basically anyone to the left of Bill Clinton in 1996,” which is odd, because I was to the left of Bill Clinton in 1996, and still am.) The other politician supposedly representing my worldview is Lieberman. (In fact, while my editor endorsed Lieberman for president in 2004, I wrote a dissent saying Democrats would be crazy to nominate him.)

If you want to associate my brand of politics with an actual politician, it’s a little strange to pick those two. What makes it all the more strange is that there’s a much more contemporary Democratic politician who quite obviously does embody my values pretty closely. You know … the one I have written numerous articles and a book about, making the case that he’s one of American history’s most successful presidents? Yet Pareene’s article about how the Democratic Party is rejecting politicians I agree with does not contain the word Obama anywhere in it.

There’s a reason he ignores the obvious political stand-in for my beliefs. Barack Obama is a decidedly inconvenient figure for his gloating. After all, if the Democratic base had truly rejected the center-left agenda and was demanding socialism, Obama would be an unpopular figure (and people like Pareene would be using him as a poster boy for the discredited Establishment). In fact, Obama left office with a 60 percent approval rating, and is currently viewed favorably by 95 percent of Democrats.

Political activists and writers can get the impression that the Democratic Party is riven by conflict between leftists and liberals. But social media is deeply unrepresentative. On Twitter, which is swarming with communists and Nazis, every day feels like the 1932 German federal elections. The massively elevated concentration of political extremists of all varieties creates a deeply misleading portrait of the public. (This is why libertarians have managed to portray themselves as a significant proportion of the electorate, when practically speaking, they don’t exist.) 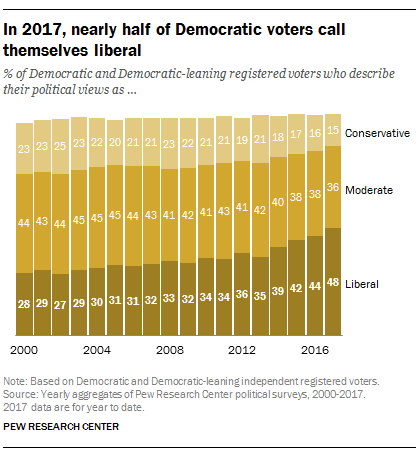 To be sure, ideological self-identification is a crude tool for measuring a voter’s beliefs. Not all voters understand what different labels mean. Still, this explanation is itself a reason to be skeptical of the strength of the progressive left among the Democratic electorate as a whole. Voters who don’t know enough about issue positions to label themselves are almost by definition not committed to left-wing ideology.

The other limit, of course, is that this survey doesn’t even attempt to measure left-wing as opposed to liberal. Not many surveys do. The one survey I’ve seen that breaks down ideology between liberal and left-wing is a survey of college freshmen, who are more progressive than the population as a whole. It finds that only 4 percent identify as “far left,” as distinct from liberal.

Update: Jocelyn Kiley from Pew Research sends a more fine-grained version of the ideological self-identification among Democrats. It breaks down the liberal category into “liberal” and “very liberal.” The latter is perhaps a too-expansive definition of the left-wing/socialist faction, some of whose members renounce liberalism altogether. It’s fair to see that the “very liberal” group provides a maximal estimate of the proportion of left-wing Democrats. And, while that proportion has been growing very rapidly, it’s still a small minority of the party’s base:

The best explanation for Sanders’s ability to garner a large minority of the vote is that he benefited from a news environment that portrayed Hillary Clinton as scandal-plagued. Sanders capitalized on a long-standing progressive good-government sentiment, which has attached itself over many decades to otherwise disparate figures, like Adlai Stevenson, Gene McCarthy, Jimmy Carter, Jerry Brown, Howard Dean, and of course, Barack Obama.

The hard left views Obama as a neoliberal sellout. (Sanders himself has had more restrained criticisms of Obama, whom he has depicted as largely a disappointment, and now mostly avoids discussing him.) But Obama’s popularity makes him an inconvenient figure for left-wing triumphalism to reckon with. It is common to read Sandernistas describing the Democratic electorate as if Hillary Clinton and Bernie Sanders were the only two choices available. They may discover, in 2020 and beyond, that the 44th president and his public philosophy remain very much alive.

+Comments Leave a Comment
The Berniecrats Have an Obama Problem