The Senate GOP’s last-ditch attempt to euthanize the Affordable Care Act faces an array of formidable obstacles. They include: the unanimous opposition of health-industry stakeholders; the deep unpopularity of the new bill’s Medicaid cuts; the overwhelming likelihood that the Congressional Budget Office will once again find that the Republican approach to “health reform” involves throwing tens of millions of people off of insurance; and, above all, the precious little legislative calendar left to burn.

But on Monday, the CBO revealed that this last obstacle may prove an unlikely asset. The budget office announced that, while it will provide “a preliminary assessment” of the Graham-Cassidy bill early next week, it will be unable “to provide point estimates of the effects on the deficit, health insurance coverage, or premiums for at least several weeks.”

This is unfortunate, since Senate Republicans need to pass the Graham-Cassidy (a.k.a. zombie Trumpcare, a.k.a. the abolition of Medicaid as we’ve known it) within the next 12 days. After September 30, the year’s version of the reconciliation instructions that empower Senate Republicans to repeal Obamacare with just 51 votes will expire. The CBO’s preliminary assessment will give Republicans enough analysis to meet the core requirements of reconciliation — the CBO will be able to confirm that massively cutting federal health spending will not increase the deficit. But it won’t have hard numbers on coverage effects. Which is to say: If Mitch McConnell’s caucus passes Graham-Cassidy, it will do so without knowing exactly how many people the law would likely hurt.

Given that said number is (almost) certain to be big and ugly, this current lack of detailed estimates will likely be a benefit to the bill’s backers. Or so the legislation’s co-author, erstwhile “moderate” Republican Bill Cassidy, would seem to believe.

“I just don’t care about the coverage numbers, because their methodology has proven to be wrong,” Cassidy said last week. “And ours, frankly, empirically, is correct.”

In its preliminary assessment, the CBO will “provide as much qualitative information as possible about the effects of the legislation.” But that information won’t include precise projections of how many people would be likely to lose coverage — or pay higher premiums — if Graham-Cassidy were to become the law of the land.

Hopefully, the CBO can provide some kind of descriptive, ballpark estimate next week. Since Graham-Cassidy devolves a great deal of authority over health-care policy down to the states, formally modeling its expected effects will be a complex, arduous process. But determining whether the bill would dramatically increase the number of Americans without access to affordable health care should be easy. The CBO has previously estimated that repealing the Affordable Care Act without a replacement would increase the ranks of the uninsured by 32 million. Ten years after its passage, Graham-Cassidy would eliminate all funding for the ACA’s subsidies and Medicaid expansion — while also making steep cuts to the traditional Medicaid program. One would expect such a combination of cuts to produce coverage losses larger than a mere repeal without replacement, which is to say, losses in excess of 32 million. 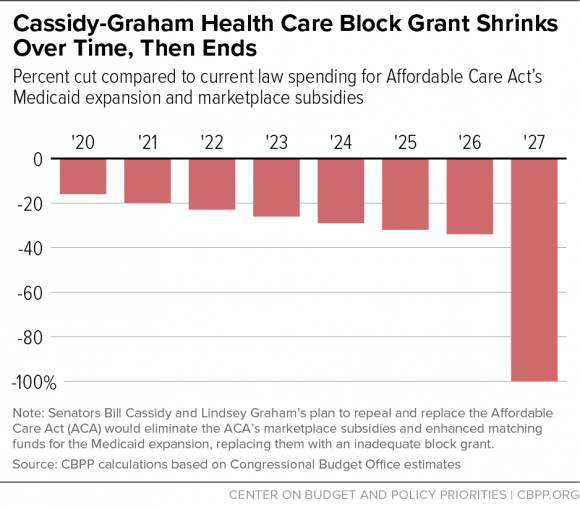 Regardless, if and when Republicans vote on this thing, they’ll know exactly what they’re doing. It will be up to progressives to make sure that the public does, too.

THE FEED
16 mins ago
what we know
what we know
Did China’s Alleged Spy Balloon Mission Backfire? Updates
By Chas Danner
It’s possible the whole saga will end up being a U.S. intelligence win.
19 mins ago
just asking questions
just asking questions
Should a 13-Year-Old Have Bariatric Surgery?
By Benjamin Hart
Sandra Hassink on what the new pediatric obesity guidelines she co-authored do and don’t say.
8:00 a.m.
the economy
the economy
America’s Labor Shortages Are Good, Actually
By Eric Levitz
The upside of longer lines and faltering customer service.

1:41 a.m.
what we know
what we know
Turkey and Syria Struck by 7.8 Magnitude Earthquake: Updates
By Chas Danner
Collapsed buildings have been reported in multiple large cities and the Turkish government has already requested international aid.
2/5/2023
early and often
early and often
Has Pete Buttigieg’s Dream Job Turned Into a Nightmare?
By Ed Kilgore
It turns out Transportation secretary won’t be a quick and easy layover on the way to higher office for Mayor Pete.
2/4/2023
early and often
early and often
The Democrat Who Could Take Down Kyrsten Sinema
By Ben Jacobs
Ruben Gallego will try to fulfill the left’s dreams by challenging Arizona’s newly independent U.S. senator.
2/3/2023
early and often
early and often
House Republicans’ Assault-Weapon Pins Aren’t Just a Taunt
By Ed Kilgore
Owning the libs may be an added bonus, but Second Amendment absolutists clearly intend them as a threat against those who challenge gun rights.
2/3/2023
the talented mr. santos
the talented mr. santos
Here’s Every Single Lie Told by George Santos
By Matt Stieb
Navigating the many exaggerations and falsehoods of New York’s newest representative.
2/3/2023
creature capers
creature capers
The Hunt Is on to Find the Dallas Zoo Bandit
By Matt Stieb
A suspect was arrested after police received a tip that the alleged bandit was visiting the aquarium.
2/3/2023
just asking questions
just asking questions
What Could a Chinese Spy Balloon Over the U.S. Do, Exactly?
By Matt Stieb
Arms-control expert Jeffrey Lewis examines whether the Chinese spy ship over the West is an accident or a geopolitical middle finger.
2/3/2023
poll position
poll position
Trump’s Lead in 2024 Polls May Be Thinner Than We Thought
By Ed Kilgore
The ex-president looks weaker against Ron DeSantis and other likely Republican rivals in the polls that were most reliable last year.
2/3/2023
tremendous content
tremendous content
Trump Knows How to End Ukraine War ‘Immediately,’ But It’s a Secret
By Margaret Hartmann
Trump revealed there’s something he could say that would “guarantee” that the fighting ends now. Sadly, he won’t tell unless we reelect him.
2/3/2023
horrible bosses
horrible bosses
Working for George Santos Is As Crazy As It Sounds
By Matt Stieb
A former aide recorded his conversation with the congressman as he was getting fired. Santos wasn’t all that nice about it.
2/3/2023
crime
crime
New Jersey Councilwoman Shot and Killed Outside Her Home
By Nia Prater
Eunice Dwumfour, a 30-year-old member of the Sayreville Borough Council, was found shot dead on Wednesday night.
2/3/2023
the economy
the economy
The Fed Can Stop Choking the Economy Now
By Eric Levitz
The statistical and moral case for easing up on the interest-rate hikes.
2/3/2023
2024 presidential election
2024 presidential election
What on Earth Are These 2024 Long Shots Thinking?
By Ed Kilgore
It’s not inconceivable that someone like Nikki Haley could become a contender. But don’t count out sheer ego as motivation.
2/3/2023
just asking questions
just asking questions
What It Takes to Give Abortion Seekers (Actually Good) Advice Online
By Irin Carmon
The Online Abortion Resource Squad’s Ariella Messing on fighting disinformation in a post-Roe world.
2/2/2023
early and often
early and often
Trump Reminds Republicans He’s Willing to Ditch the GOP
By Ed Kilgore
Even if he doesn’t formally launch a third-party bid, Trump could doom the 2024 Republican presidential nominee.
2/2/2023
royals
royals
Australia Banishes King Charles From Its Banknotes
By Margaret Hartmann
In the battle to succeed his mother on Australian $5 bills, Charles loses to the First Australians.
2/2/2023
early and often
early and often
The Hunter Biden Counteroffensive Begins
By Matt Stieb
Tired of being a GOP punching bag, he threatened Fox News with a defamation suit and encouraged the DOJ to investigate how his laptop became public.
2/2/2023
the national interest
the national interest
The GOP Attack on Ilhan Omar Trivializes Antisemitism
By Jonathan Chait
Elevating Marjorie Taylor Greene exposes the hypocrisy.
2/2/2023
religion
religion
Badass Pope Briefly Endorses Giving People the Finger
By Benjamin Hart
A weird Thursday-morning tweet from the pontiff.
2/2/2023
early and often
early and often
The Latest Hunter Biden Revelation Is a New Low
By Matt Stieb
Texts reportedly show he withheld an employee’s pay for sex.
2/2/2023
what we know
what we know
New FBI Search of Biden’s Home Finds No Classified Documents
By Margaret Hartmann
The search of Biden’s Rehoboth, Delaware beach house was planned and consensual, like the searches of his office and Wilmington residence.
2/2/2023
early and often
early and often
The GOP Can’t Remember Why It Took the Debt Ceiling Hostage
By Eric Levitz
Republicans are fighting Biden for the sake of fighting.