It doesn’t look like anything to me. Photo: BRENDAN SMIALOWSKI/AFP/Getty Images

While urging voters to back his preferred candidate, Luther Strange, at a rally in Alabama just days before Tuesday night’s special Senate election runoff, President Trump stopped to muse about whether he should have endorsed the other candidate. “I shouldn’t be doing it — the last thing I want to do is be involved in a primary,” Trump said, adding: “I might have made a mistake.”

Trump said he was taking a “big risk” since if Strange lost it would be portrayed as a “total embarrassment” for him in the press. Then he hedged a bit, declaring, “If his opponent wins, I’m going to be here campaigning like hell for him.”

Great to talk with President Trump tonight about #ALSen!

I very much look forward to working with the President to win in December! pic.twitter.com/A72Fdc6Mua

But he also tried to mitigate his humiliation by deleting his recent tweets praising Strange. They were captured by ProPublica: 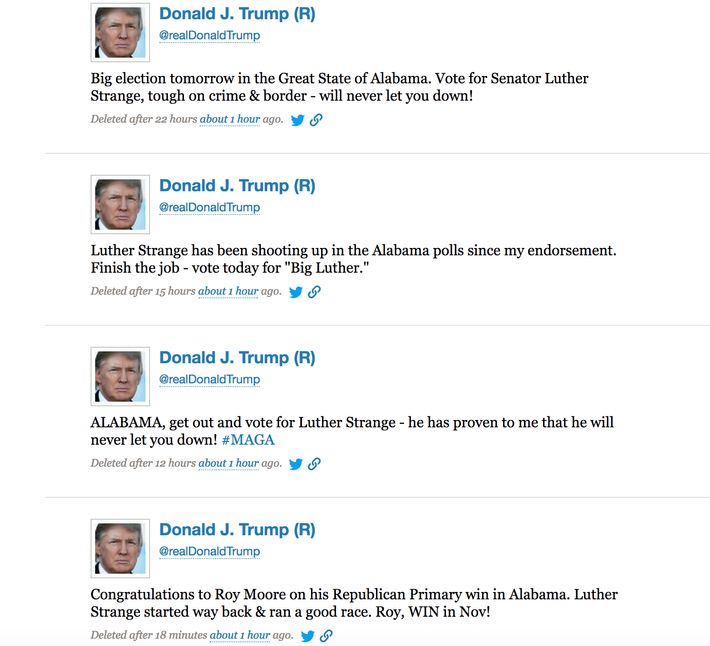 The national politicians who did not attempt to literally erase history still opted to make an awkward flip. Rather than just congratulating Moore for his win, Vice-President Pence noted that he’d run on the Make America Great Again agenda … while the candidate Pence supported days earlier was viewed as an Establishment figure. 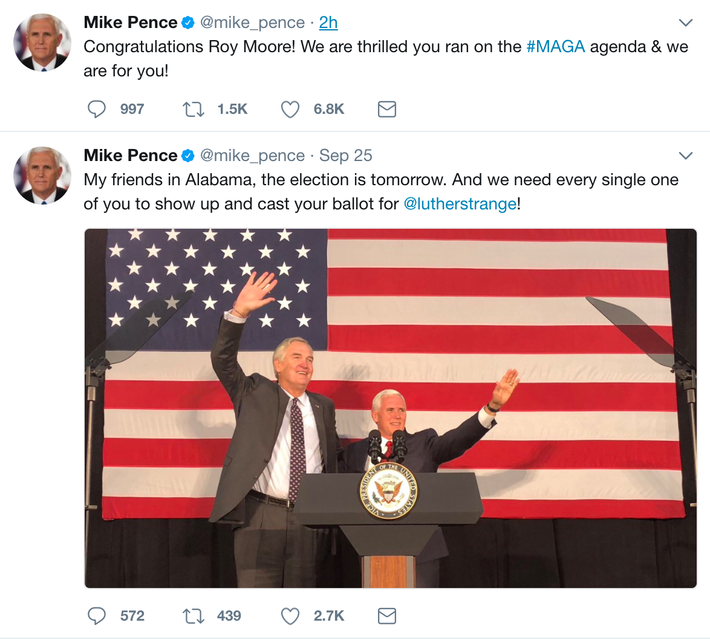 McConnell managed to top Pence. His allies spent more than $10 million on Strange, and Moore’s campaign relentlessly tied the incumbent to the majority leader, who’s disliked among many in the GOP base. In a statement on Tuesday night. McConnell said Moore “ran a spirited campaign centered around a dissatisfaction with the progress made in Washington,” and claimed, “I share that frustration and believe that enacting the agenda the American people voted for last November requires us all to work together.” McConnell has been a part of the Republican leadership in the Senate since 2003, and he’s failed to enact any major legislation this year, though his party controls Congress and the White House.

Strange’s loss was McConnell’s third blow in a day, after another effort to repeal Obamacare officially died and Senate Foreign Relations Committee chairman Bob Corker announced his retirement. While McConnell called for party unity, Moore’s win means that Steve Bannon’s civil war for control of the Republican Party is on.

GOP voters choosing Moore — who was twice ousted as Alabama’s chief justice, and suggested this year that 9/11 was punishment for the U.S. turning away from God — will likely embolden other fringe figures to run in 2018 and encourage incumbents to retire. Bannon campaigned with Moore on the eve of the election, and his victory proved that right-wing nationalist forces can triumph over the Establishment in the 2018 midterms, regardless of whom Trump himself endorses. To say Breitbart was excited about Moore’s win would be an understatement: 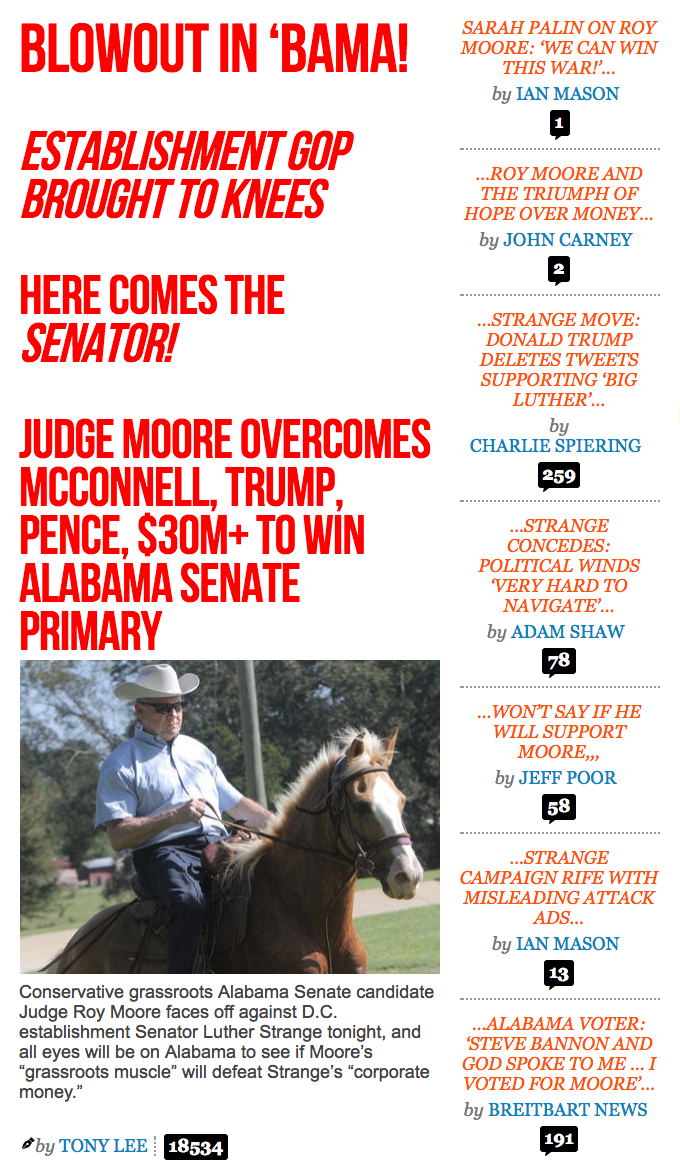 Charlie Sykes, a former conservative talk-radio host, said the situation reminded him of 2010, when many tea partiers ousted Establishment Republicans.

“It’s almost as if there is a compulsion in the party to nominate the most ‘out there’ candidate just to show you can, with no concern about what that means for the rest of the party,” Sykes told the Washington Post. “Republicans — and that means Trump, too — have unleashed something they can’t control.”