Got to admit it’s getting better. Photo: Caitlin OHara/Bloomberg via Getty Images

In 2016, while Donald Trump was surveying “American carnage” on the campaign trail, median household income in the U.S. rose by (an inflation-adjusted) 3.2 percent, to $59,039, according to data released by the Census Bureau Tuesday.

The bureau’s data also shows that the poverty rate fell by 0.8 percent last year, to 12.7 percent — which is to say, 2.5 million Americans escaped poverty, while 40.6 million remained mired in it, despite living in the wealthiest country in human history. 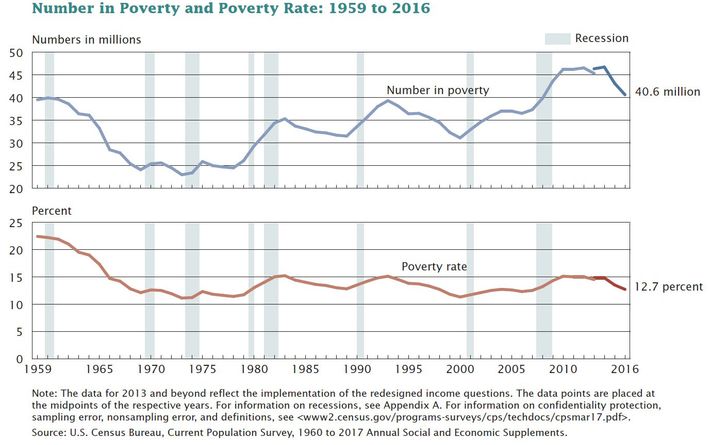 In a sense, those last two figures tell the broader story of the Census report: The American economy made some vital progress in 2016, but is still far from overcoming the defects inherent to its rampant inequality. While poverty has fallen significantly during this expansion, it’s still 1.6 percent higher than it was in 2000. And to the extent that America has kept poverty in check — amid decades of growing inequality — we have our safety net to thank.

While middle class incomes grew, it really has been a great few years for the rich. pic.twitter.com/JPBaotXgnH

Lemme make an obvious point: What keeps the poverty rate down? The social safety net. pic.twitter.com/lyeLzf1RJj

Keep that last graph in mind the next time you see a mainstream publication suggest that Paul Ryan genuinely cares about America’s poor.

In 2016, there was no significant change in America’s income inequality, as measured by the Gini coefficient. Still, the gap between the very top and very bottom inched wider, as the lowest decile of American earners saw their incomes grow by 1.3 percent in 2016, while those in the top decile saw theirs increase by 3.8 percent. Meanwhile, income inequality between racial groups in the U.S. remains gargantuan. 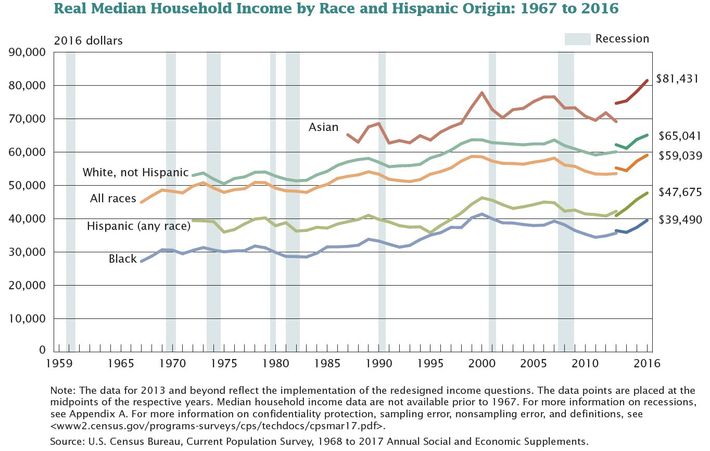 The fact that the typical American family is finally earning more than it was in 1999 is certainly encouraging. But it’s important for observers not to conflate record median income with record living standards. The costs of higher education, health care, and housing have all increased substantially since 1999 — while the average American family is burdened with significantly more debt today than it was on the eve of this century.

Among the other bits of context to keep in mind when interpreting last year’s income gains:

(1) The increase in the median household income was powered by increases in employment, not in wage growth. Male workers with full-time, year-round employment actually saw their take-home pay fall by 0.4 percent in 2016, while their female counterparts enjoyed a measly 0.7 percent gain. Household incomes rose significantly, anyway, because the number of earners per household increased by 0.4 percent, while said earners were 1.2 percent more likely to hold full-time employment. Increasing the availability of full-time employment is great. But wage growth remains tepid, relative to what one would expect at this point in an expansion.

(2) Household income growth was a more robust 5.2 percent in 2015. It’s possible we’re nearing the peak of this business cycle.

(3) Earnings among male workers still lag more than a percentage point behind their 2007 level.

+Comments Leave a Comment
U.S. Families Are Finally Making More Than They Did in 1999