A few costume ideas for your Halloween inspiration.

Halloween is rapidly approaching, but not so rapidly that you don’t have time to plan and assemble a decent costume for whatever your plans are — a party, a parade, watching the two good Halloweentown movies on your couch, then ranting about how the third one is trash, and then watching it anyway. As full-time meme connoisseurs, we here at Select All have rounded up a few of our favorite, and most easily costume-able, memes from the last year to give you some inspiration. 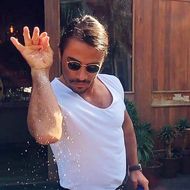 Dress up like everybody’s favorite Turkish chef. Start with a pair of black pants and toss on a white T-shirt. (If you don’t already own a white T-shirt, try one of these.) Next, you’ll need a pair of round wire-framed sunglasses with dark lenses. Complete your look with some salt. (Consider carrying around a shaker or a Morton’s container if you’re worried that people won’t get your costume.) Bonus points if you bring a giant hunk of meat to really commit to the bit.

Revisit this summer’s breakout Snapchat filter for Halloween. Snapchat recently started selling a hot-dog suit if you’re willing to part with $80 to get the official look. If you want to be a break-dancing hot dog on a budget, consider building your own. You can get a hot-dog suit for about $20 and add a pair of green headphones to complete the ensemble, for about half the price of Snap’s suit. Plus, you can use the headphones the other 364 days of the year sans hotdog costume.

Basically, this is just dressing as the pope … except he’s young and hot. Which is, frankly, more ideal for trying to get some on Halloween than dressing as an old pope. Be sure to keep a can of cherry-flavored Coke Zero — Pope Lenny’s beverage of choice — on hand at all times. If you happen to run into somebody dressed as a nun on Halloween, draft them to be your Sister Mary (Diane Keaton).

A good costume if you’re particularly strapped for cash, but have access to a color printer and some tape. (I’m not telling you to abuse your office supply closet, but I’m also not not telling you to abuse your office supply closet.) Decide which emoji — bees, death, eggplants — you’d like to be the sheriff of and print out about a dozen enlarged versions of said emoji. Cut out the emoji and affix them to your torso, arms, and legs. (Depending on the coverage you want, you might need to print more emoji. Toss in a cheap cowboy hat — or print one if you’re feeling so inclined — and get ready to say “Howdy” a whole lot. 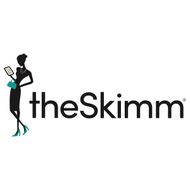 Looking for a costume that will land with approximately a dozen people, after you explain it, on Halloween? Consider going as the Skimm, an email newsletter possibly best known for its, uh, unexpected summaries of traumatic and important news. Pair this glass-of-milk shirt — just think, you can re-wear this — with a few printouts of the best Skimm headlines. Example: a story about Chelsea Manning’s release that was summed up as “What to say when your friend asks what time you can get drinks after work … I’ll be free earlier than expected. Just like Chelsea Manning.”

Possibly the laziest costume on this list, all you’ll need to be Kellyanne Conway giving a show-and-tell presentation on Fox News is a printer. You could, if you are so inclined and have one handy, toss on a mint-colored dress. Or even a blonde wig. But really, all you need are the signs. Type “CONCLUSION? COLLUSION” on one and “ILLUSION DELUSION” on the other. Be sure to cross out “COLLUSION.” Definitely no colluding going on in the Trump administration. 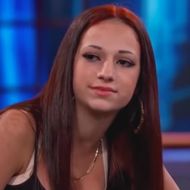 Though her now-infamous episode of Dr. Phil first aired in 2016, 2017 has undoubtedly been the year of Danielle Bregoli. The “cash me outside” originator has since snagged a reported television deal, a contract with Atlantic records, and an enviably large Instagram following. A red wig, some gold hoops, and a camisole with visible bra straps, and you’re in business. 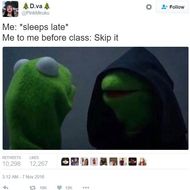 Full-on masks are kind of a pain if you actually want to speak to anybody on Halloween, so we’re recommending this lovely Kermit hat, which gets the point across without obscuring your face. If you’re really committing, you can always pair it with some green face paint. You’ll only need one cloak, which you can always trade off if you get tired of being the evil Kermit and want to go back to the sunshine-and-rainbows version.

You’ll need three people for this costume — an homage to a very good meme from late August — and you’ll all need to commit to standing near each other for the duration of the evening if you don’t just want to look like three people in normal clothes who showed up to a Halloween party. The most important part is that the person in plaid stand in the middle and look particularly thirsty for any and all photo ops. 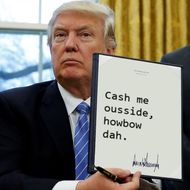 Remember when Trump first took office and it seemed like he was signing an executive order every hour on the hour? So many, in fact, that Trump signing bogus EOs became something of an internet gag. This is that. Dress yourself as Trump — we’ve recommended a few costume pieces below, but you’ll also need a jacket and tie — and grab a blue folder.