The American public is a lot less ideologically divided than our politics might lead one to believe. This is because the vast majority of the American people don’t actually have coherent ideologies, and view politics primarily through the lens of group identity. Ask the public about their views on discrete policy questions, and you’ll find there’s a good deal of bipartisan consensus on the defining issues of our moment: Recent polls have shown that most “conservative” Republicans support increasing federal spending on health care, and oppose cutting taxes on rich people.

But when it comes to group identity — and policy issues tightly wedded to those identities — boy howdy, are we a house divided. In the wake of the horrific Las Vegas shooting Sunday night, SurveyMonkey’s Jon Cohen dusted off these two Electoral College maps: one showing how 2016 would have played out if only gun-owning households had voted — the other, if only non-gun-owning ones did. 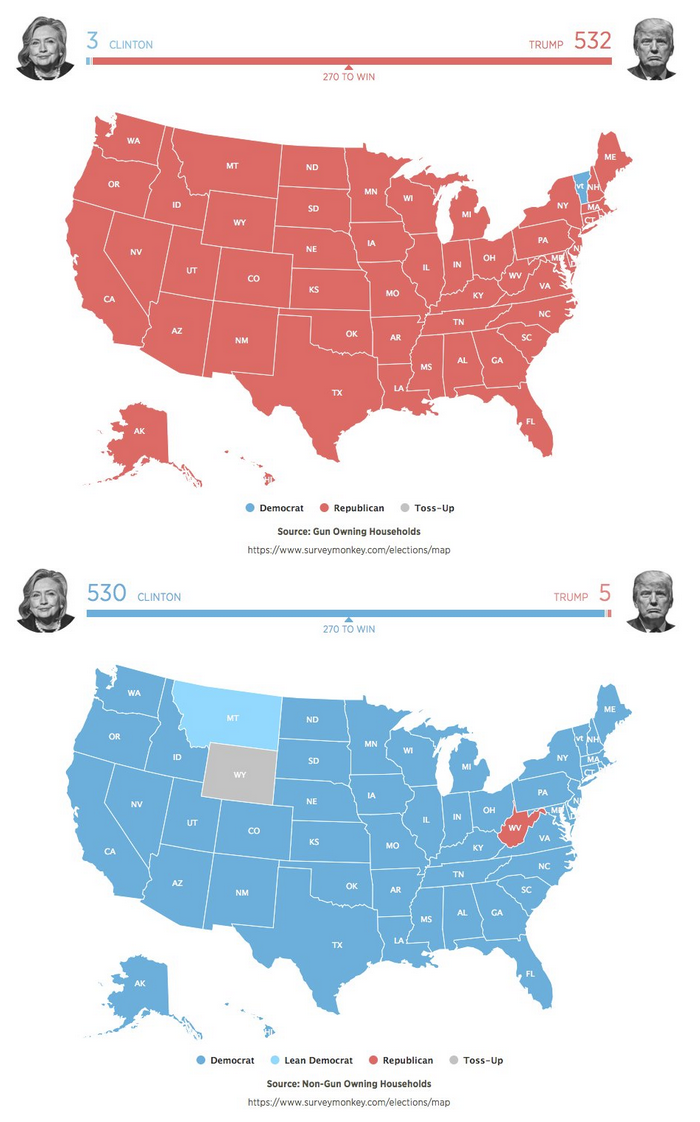 One can draw a couple conclusions from this map:

(1) There are few — if any — demographic variables that cleave the country as cleanly between parties as gun ownership. This may be because gun ownership is such an effective proxy for the urban vs. rural divide that has come to define our politics.

Notably, on concrete questions of gun policy, there is plenty of cross-partisan consensus. Virtually everyone but firearm manufacturers think universal background checks make sense. But at the end of the day, gun owners know that Republicans are for people like them — while Democrats are for stuck-up, urban elites; or corrupt globalists; or undeserving minorities; or the one-world government that wants to take everyone’s guns and put people in FEMA camps.

And so, for the moment, we’re stuck with a majority party that wants to make changes to taxes and spending that almost no one in America wants, while mass shootings come and go like bouts of bad weather.

+Comments Leave a Comment
If Only Non–Gun Owners Voted, HRC Would Have Won 48 States

THE FEED
13 mins ago
what we know
what we know
Horrifying Footage Continues to Emerge From Turkey and Syria: Updates
By Chas Danner
The powerful earthquakes have flattened thousands of buildings in the region, and the death toll continues to mount.
4:25 p.m.
what we know
what we know
U.S. Recovery of Alleged Spy Balloon Continues: Updates
By Chas Danner
China claimed on Monday that a second similar balloon seen over Latin America last week was also just a wayward civilian craft.
3:32 p.m.
tremendous content
tremendous content
Don Jr. Is Ready to Laugh About the ‘Trump Baby’ Balloon
By Margaret Hartmann
While the Chinese spy balloon is no more, its cranky little brother is getting pampered by the Museum of London, giving Trump’s son a chuckle.