Is this your phone now? Photo: Apple

If you were one of the lucky (?) few who stayed up till 3 a.m. in order to spend a thousand dollars on a phone, you might want to start shopping around for some industrial-strength cases now. Last night, while you were frantically refreshing the order screen, Apple posted an interesting little update to its repair-costs section that might be worth taking note of.

Accidentally drop your face-scanning phone on the ground while using it to turn your lovely visage into a 3-D poop emoji? A new screen will cost you $279. 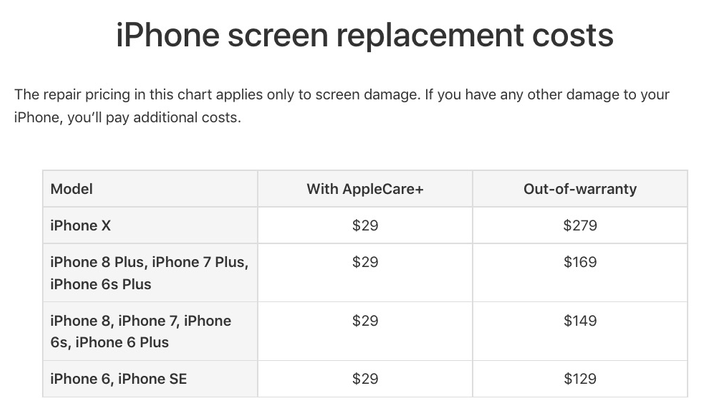 If you have AppleCare+, it’s a more reasonable $29 — but AppleCare+ is $199 upfront, and you only get two repairs at that cheaper rate.

And don’t even think about getting your new notched iPhone near the water (I’m guessing an up charge for thought crime will be added in the coming months), as non-screen-related repairs will cost you a whopping $549. Or, in other words, half the cost of an iPhone X.

With the relative newness of the tech within the X, it seems likely that these high-price brackets will stick. Most unauthorized dealers (a.k.a. that hole-in-the-wall “store” your friend’s cousin recommended to you that fixes phones for super cheap) won’t be able to be competitive in the iPhone X repair market until they get their hands on a lot of iPhone Xs. And with reports of shortages up the wazoo, plus a wait list that’s currently pushing five weeks, and the phone’s sky-high price, that doesn’t seem likely to happen anytime soon.