On this day ten years ago, one of my all-time favorite films was released in theaters: Michael Clayton. Clayton features George Clooney as the titular character, a shadowy legal “fixer” who reevaluates the dirty work he does on behalf of evil corporate clients after one of his clients murders his mentally unstable mentor. It’s the rare film that somehow gets better every time I watch it — and I’ve watched it at least a dozen times.

This piece concerns the final scene of this beautiful movie, so if you haven’t seen Michael Clayton yet, go rent it and come back in a few hours. If you have seen it, why not brush up anyway?

The final scene of Michael Clayton features one of the most satisfying comeuppances ever to be recorded on celluloid. It’s the scene in which Tilda Swinton earned the Oscar she won for the movie. Having finally outfoxed the lawyer who ordered his mentor’s murder by secretly recording her confession, Clayton pulls out his phone to take a picture of her astonished, confused face. She either does not understand what has happened or is unable to admit it to herself.

I would like to point out this beloved, period-appropriate detail: Michael Clayton’s flip phone. At his moment of victory, Clayton reaches into his breast pocket and pulls out a phone that is — in hindsight — way too small. He uses it to snap a picture of the moment. Look at the tiny phone! 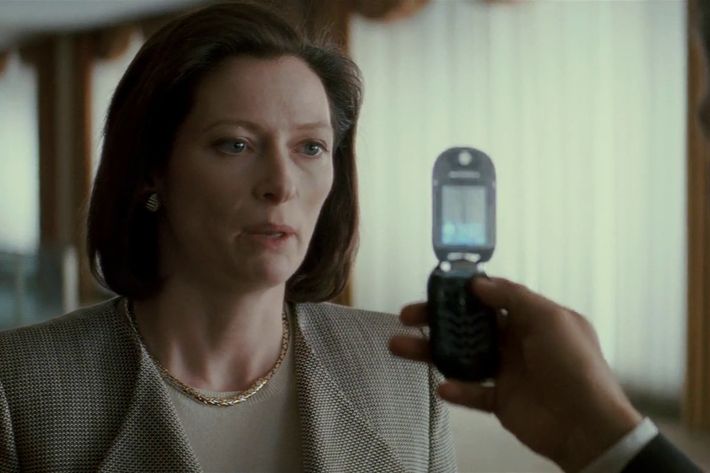 “Here, lemme get a picture while I’m at it.” Iconic.

The phone that Michael Clayton is holding here is a Motorola Pebl. It’s an odd but excellent bit of characterization: Most corporate lawyers in 2007 would have carried around a BlackBerry, and Clayton does, too, but for the purpose of surreptitiously recording a confession, the flip phone and its form factor were superior. (Also, he threw his BlackBerry into a bombed-out, burning car in order to fake his death.)

The phone is as perfectly chosen for drama as it is for characterization. There is a showmanship to opening a flip phone — a dramatic flair that’s not possible with the touchscreen swipe. According to an early 2006 CNET review, “When you hold it in one hand, you can open the Pebl by sliding the front flap toward you (away from the hinge) with your thumb. The flap then flips open in one easy stroke … It opens so quickly and with such force that we felt as if the Pebl would fly out of our hand.” (You know what else opens “so quickly and with such force”? The 2007 motion picture Michael Clayton, which begins with a blistering monologue by the great Tom Wilkinson.) “It’s not the most feature-laden phone, but it’s one of the prettiest,” wrote PC magazine, a description that also applies to George Clooney.

Now, in 2017, Clayton’s flip phone resonates because of how bad we know its camera must be. We’re used to high-quality photos on our phones now, but the flip-phone era of photography required a much greater compromise between quality and utility. Again, I’ll let 2006-era CNET explain:

Considering the phone’s price, we were hopeful for a megapixel camera; instead, you’re stuck with a VGA model that delivers three photo resolutions: 640x480, 320x240, and 160x120. For photo-editing features, you have a choice of six lighting settings, an adjustable brightness control, a 4X zoom, a 5- or 10-second autotimer, and a selection of five shutter sounds, as well as a silent option. The MPEG-4 video recorder takes clips about 30 seconds in length with sound and in two resolutions (176x144 and 128x96); you can also choose a lighting setting. Photos and video were about what you’d expect from a VGA camera; objects were fuzzy, and colors didn’t exactly jump out. When finished with your snapshots and clips, you can send them in a multimedia message or save them to the phone. A meter keeps track of how much space in the phone’s 5MB of memory you have left.

A 640-by-480-pixel photo resolution! Five MB of memory! And 30 seconds of video at a crystal-clear 176-by-144! Imagine Motorola placing a Pebl photo up on billboard-size advertisements as Apple does now.

I’m pretty sure my toaster now has better tech specs than this phone, but that’s kinda what makes the Michael Clayton ending so beautiful. Taking a picture on a flip-phone camera was often more trouble than it was worth: The photo quality was terrible, and there was often no clear way to extract a photo from a flip phone — they didn’t interface with computers as easily as smartphones do now. If you wanted to text the picture to anyone else, you ran the risk of incurring a charge from your cell-phone provider. You had to really want the flip-phone picture. Clayton wanted it.