“This is in answer to your request to readers who have eaten Japanese cold noodles … you called them ‘Zaru,’ but my dentist and hairdresser, both of whom are Japanese, call them ‘Udon’ and in Japan I had them as ‘Soba.’ The choice of name is yours. By any name they were amazingly delicious.” —Mimi Sheraton, June 17, 1968

“As someone both involved and named by Mr. Wolfe as being involved, I would like to register disgust and disquiet at your issue devoted to Leonard Bernstein and Radical Chic, whatever that is. (Let me say right away that I’m not a relative of Mr. Bernstein.) It seems impossible that a responsible magazine would distort reality and attack a fundraising event in support of radical rights without even a sideswipe at perspective … His article says loud and clear that liberals who join with radicals in support of any issue will be publicly excoriated and humiliated. He’s right there in the same corner with Mr. Agnew; the prose is somewhat different, but not the message.”—Judith Bernstein, June 22, 1970

“Fred Powledge … completely missed the point on why some blacks supported Governor Rockefeller’s candidacy … We refuse to turn our backs on a governor who has done more than any governor in the state for its citizens, and whose family — before it became fashionable — helped the cause of my people more than any family in the history of this country.” —Jackie Robinson, December 21, 1970 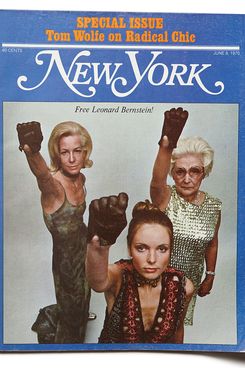 “The gravamen of [Richard Reingold’s] charges, of course, is that on Firing Line I once used the word ‘jejune’ as a verb. I implore your readers not to believe this of me, and am prepared to let them file by my office, one at a time, to listen to the original tape.” —William F. Buckley Jr., July 12, 1971

“When Truman Capote died, the kindly ones of the world press asked me to comment. But I made no comment of any kind to press or television. Now, in the absence of any public statement from me, New York claims that I said that Capote’s death was ‘a wise career choice.’ Is this the new New Journalism? If it wasn’t said, make it up; then it will be ‘fact.’ ” —Gore Vidal, November 19, 1984

“Has any journalist asked a white director why the drugs were missing from his or her film? [David] Denby feels that the anger of the black crowd that gathers at the end of Do the Right Thing is not ‘justified.’ It’s hard to justify it only if you feel that when ‘some white policemen arrive and kill a black boy’ it’s an event of little consequence, but the burning of Sal’s pizzeria is of major consequence. And that the black people in the film, who watch one of their own killed, wouldn’t feel compelled to respond.” —Spike Lee, July 17, 1989

“Based on the fact that I work for Donald Trump as his secretary — and therefore know him well — I think he treats women with great respect, contrary to what Julie Baumgold implied in her article … I do not believe any man in America gets more calls from women wanting to see him, meet him, or go out with him. The most beautiful women, the most successful women — all women love Donald Trump.” —Carolin Gallego, December 7, 1992

“I have frequently expressed support for the use of force, if necessary, to deny North Korea a nuclear arsenal, although I know of dozens of Republicans who oppose that view.” —Senator John McCain, August 15, 1994 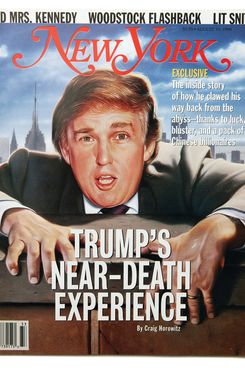 “While I appreciate many of the things said about me in Craig Horowitz’s cover story ‘Trump Gets Lucky,’ I did not appreciate the self-serving, improper, and false statements made about me by my real-estate brokers on the deal … As they tell their story, one would tend to believe that they were responsible for making the deal on Riverside South. In fact, nothing could be further from the truth. They were two ‘Nervous Nellies’ who would constantly and frantically call me and plead for me to make the deal. Frankly, they became a pain in the ass.” —Donald J. Trump, September 5, 1994

“In his review of A Little Night Music, Peter G. Davis wonders what Ingmar Bergman thinks of the piece. I can tell him. Mr. Bergman liked the score so much that he came to New York to see the show. And he liked the show so much that he asked me to work with him on an anarchic film version of The Merry Widow. (The financing evaporated, however, and the project never came to fruition.) I asked him if the change in tone from Smiles of a Summer Night to A Little Night Music bothered him. He replied that it didn’t bother him at all, that our show and his movie had nothing to do with each other except that they had the same plot. ‘Besides,’ he added (and this is an exact quote), ‘we all eat from the same cake.’ ” —Stephen Sondheim, May 26, 2003