The political landscape in America is itself evidence of the reality and extent of partisan and ideological polarization. But there is an abiding belief among some academics and professional centrists that the warring tribes of Washington are fundamentally misrepresenting Americans who pretty much agree on the important things and wonder why we can’t just all get along.

The Pew Research Center now offers some fresh and abundant data illustrating the extent, nature, and implications of polarization among regular Americans. Pew’s central finding is that Americans are indeed much more polarized than they were in 1994, when they began asking the same questions to some of the same kinds of people.

The divisions between Republicans and Democrats on fundamental political values – on government, race, immigration, national security, environmental protection and other areas – reached record levels during Barack Obama’s presidency. In Donald Trump’s first year as president, these gaps have grown even larger.

And the magnitude of these differences dwarfs other divisions in society, along such lines as gender, race and ethnicity, religious observance or education.

Much of the Pew data reinforces the hypothesis that we are experiencing the tail end of what one influential analyst called “The Partisan Sort,” the drift of liberals toward the Democratic Party and conservatives toward the Republican Party, severing ancient partisan ties based on ethnic loyalties and events as remote as the Great Depression or even the U.S. Civil War. Here’s one particularly rich finding:

In other words, rank-and-file voters are separating into their “natural” parties just as much as are their representatives in Congress.

The murkier question about polarization is whether voters are becoming more extreme in their ideological leanings, not just following them into one party or the other. But Pew suggests our more consistently conservative and liberal party groupings are also becoming more liberal and conservative as they sort.

[A]lthough many Americans continue to hold a mix of liberal and conservative views across different issue areas, that share has declined over time.

It’s increasingly clear that the great object of traditional political persuasion, the “median voter” who holds positions equidistant from partisans and ideologues, is becoming a much less dominant element of the electorate. 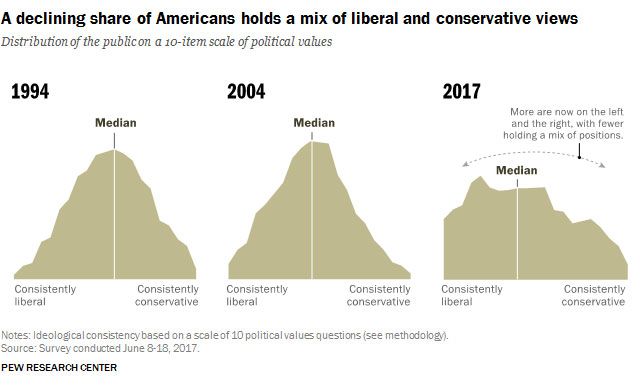 There are obviously multiple ways to look at these phenomena. The most common is to wring hands and deplore both partisan and ideological polarization as preventing things from “getting done,” and as thwarting the natural goodness and reasonableness of Americans.

Another approach is to applaud polarization as creating political parties that consistently stand for important principles, and that aren’t just devoted to deal-cutting and constituency-tending. There was plenty of bipartisanship in the decades prior to the 1960s, much of it devoted to maintaining or turning a blind eye to Jim Crow, and supporting the kind of consensus foreign policy that led to the Vietnam War.

Still another approach is to examine the structural impediments to “getting things done” that don’t depend on a return to a lost, bipartisan “paradise,” whether it’s the filibuster, the creaky procedures for enacting legislation, or the dependence of the federal government on states and localities to implement national policies. Perhaps Democrats are presently rejoicing at the trouble Republicans are having in implementing a party agenda while controlling Congress and the presidency, but this ongoing fiasco also illustrates that “polarization” is not the only problem bedeviling democracy.

Love it or hate it, though, polarization is real, it isn’t a purely Washington phenomenon, and there’s no reason to think it’s going away any time soon.