Hannity, unsurprisingly, wound up attacking the Clintons and other media outlets.

After the Washington Post reported on Thursday that Roy Moore, the Republican candidate in December’s special U.S. Senate election, molested a 14-year-old girl and dated three other underage girls, Vice-President Mike Pence and a number of Republican senators called for him to drop out of the race … if the allegations are true. They did not elaborate on what the women were supposed to do to prove that these events, which occurred decades ago, really took place. Apparently Senator John McCain considered corroborating statements from their friends and family sufficient, as he did not qualify his call for Moore to step down.

Moore adamantly denied the claims — without addressing the specifics — telling his supporters that he is the victim of a campaign to “silence and shut up Christian conservatives like you and me.”

The Obama-Clinton Machine’s liberal media lapdogs just launched the most vicious and nasty round of attacks against me I’ve EVER faced!

We are are in the midst of a spiritual battle with those who want to silence our message. (1/4) #ALSen

The forces of evil will lie, cheat, steal –– even inflict physical harm –– if they believe it will silence and shut up Christian conservatives like you and me. (2/4) #ALSen

I believe you and I have a duty to stand up and fight back against the forces of evil waging an all-out war on our conservative values!

Our nation is at a crossroads right now — both spiritually and politically. (3/4) #ALSen

Our children and grandchildren’s futures are on the line.

So rest assured — I will NEVER GIVE UP the fight! (4/4) #ALSen pic.twitter.com/QfN0GM7EMh

Alabama state auditor Jim Ziegler echoed Moore’s religious themes, noting that “Mary was a teenager and Joseph was an adult carpenter. They became parents of Jesus.”

Other Moore defenders avoided dragging Jesus and his famously virginal teenage mother into the discussion. In a speech at a fundraising dinner in New Hampshire on Thursday night, Steve Bannon, President Trump’s former chief strategist, called the accusations “politics of self-destruction.” He compared the report to the video of Trump bragging about sexual assault, painting both as orchestrated political attacks.

“But it’s interesting,” Bannon said. “The Bezos–Amazon–Washington Post that dropped that dime on Donald Trump, is the same Bezos–Amazon–Washington Post that dropped the dime this afternoon on Judge Roy Moore. Now is that a coincidence? That’s what I mean when I [call the media the] opposition party, right? It’s purely part of the apparatus of the Democratic Party. They don’t make any bones about it. By the way, I don’t mind it. I’ll call them out every day.”

That sentiment was reflected on Breitbart’s homepage around midnight, which called out the “Establishment efforts” to drive Moore from the race. 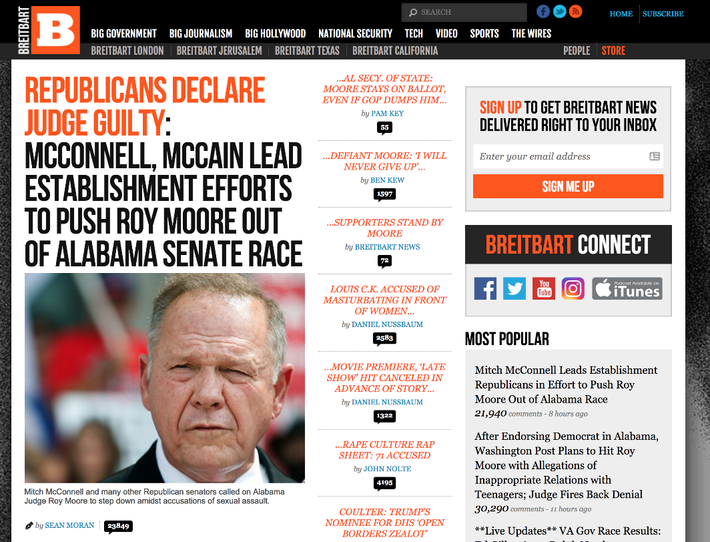 Now, if you honestly think all of the people talking to the Washington Post are lying and that the Post somehow got them all to make this up, you have got one of the biggest stories of the century.

If you can prove it, Roy Moore will end up owning the Post after his lawsuit. But the Post has offered an enormous amount of evidence. Moore’s defenders are simply shouting “fake news!” “Soros!” “Narrative!” and other inanities — because that’s all they’ve got.

And for what? To defend a man who was indefensible before the Post story.

But other right-leaning sites went with Breitbart’s narrative, highlighting Moore’s claim that he’s the victim of a vast, left-wing conspiracy: 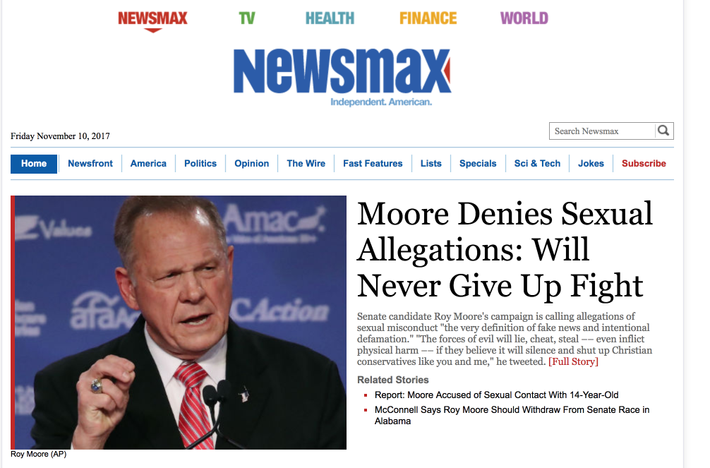 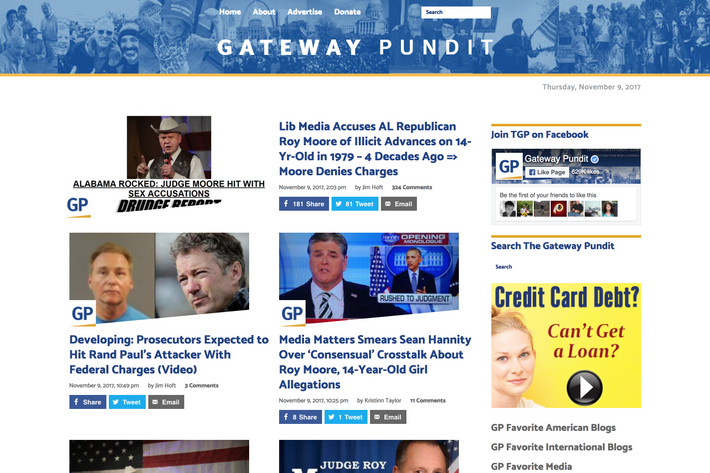 Other sites like Hot Air, the Daily Caller, and the Blaze only published brief, straightforward posts noting the Moore news. Late on Thursday night, they had been pushed to the bottom of their homepages to make room for important Sandra Bullock casting news and the like. 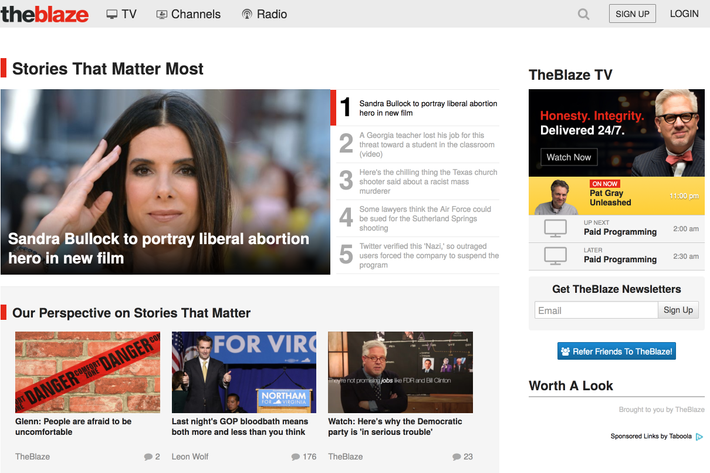 On Fox News, Tucker Carlson took a similar approach. While he covered the Harvey Weinstein scandal extensively, he devoted only 46 seconds to the Moore allegations.

Hannity, on the other hand, discussed Moore extensively. First, he generated a controversy on his radio show when he appeared to call the candidate’s alleged behavior with a 14-year-old “consensual.” Hannity later apologized saying he “misspoke and was not totally clear earlier today.” He was referring to Moore’s romantic overtures to the older teenage girls, not the 14-year-old.

. @seanhannity was clearly caught up in cross-talk on his radio show. He was not referring to a 14-year-old girl, he was referring to what he said earlier. This happens a lot on radio. You can attack him on a million other issues but this attack is patently unfair. pic.twitter.com/bDa2XH16S7

Hannity started his Fox News show by carefully and accurately laying out the allegations and Moore’s response. Then he launched into a long diatribe attacking the rest of the media and former President Obama for always rushing to judgment. The segment wound up highlighting the sexual-misconduct allegations against liberal Hollywood figures and Bill Clinton.

Later in the program, Fox News legal analyst Mercedes Colwin claimed that women frequently make false sexual-harassment allegations in an attempt to make money. “A lot of these women, it’s all about money,” Colwin said. “And they bank on the fact that these corporations have a reputation that they want to save.” (No one on the program explicitly mentioned the many women who accused Roger Ailes and Bill O’Reilly of sexual harassment, some of whom received massive settlements from Fox News.)

“Few and Far Between” ... this is quite a segment. Watch pic.twitter.com/rN9PPZYBH5

Hannity lamented that these false allegations make people doubt the real victims. “This is where you thread the needle, because there are women that are victims of predators!” he said. “Yes, there are, there are,” Colwin answered. “But very few and far between.”