The backlash to the Republican tax agenda is already getting Democrats elected — in Oklahoma. On Tuesday night, 26-year-old mental-health counselor Allison Ikley-Freeman won election to the Sooner State’s Senate, in a district that backed Donald Trump by 40 points last November.

Ikley-Freeman did not win on the strength of her fundraising or political experience. She boasted little of the former and none of the latter. But like the three other Oklahoma Democrats who have evicted Republicans from state-house seats this year, Ikley-Freeman enjoyed one decisive advantage: She bore no responsibility for the regressive tax policies that had left the state in fiscal ruin.

Oklahoma was a low-tax state even before the 2010 GOP wave crashed over it. But tea-party Republican governor Mary Fallin and her conservative allies weren’t content with the low baseline they’d inherited. Like President Trump and congressional Republicans, Fallin believed that cutting taxes on wealthy individuals and businesses was the way to grow an economy, no matter what level those taxes were currently at, or how novel circumstances might change the government’s budgetary needs.

So, when global oil prices crashed in 2014, and took Oklahoma’s budget down with them, Fallin was unfazed. Faced with giant, annual revenue shortfalls, the governor didn’t just refuse to raise taxes — she cut them even further. Last year, the Sooner State found itself with a $1.3 billion budget gap — and Fallin responded by implementing a $147 million tax cut for Oklahoma’s highest earners, and preserving a $470 million tax break for oil companies that start new horizontal wells.

Instead of asking wealthy citizens and businesses to pay a bit more (or, in the former case, to pay as much as they had been previously), Fallin decided to strip resources from the state’s beleaguered public-school system. Between 2008 and 2015, Oklahoma had slashed its per-student education spending by 23.6 percent, more than any other state in the country. But Republicans felt there was still more fat to cut: While rich Sooners collected their tax breaks, Oklahoma schools suffered a 16.5 percent funding cut in the latter half of 2016. Many of the state’s school districts now make due with four-day weeks. Others struggle to find competent teachers, as the state’s refusal to pay competitive salaries has chased talented educators out of state or into other professions. Oklahoma’s health-care and criminal-justice systems are plagued by similarly draconian cuts. Bridges in the state are literally crumbling. Potholes litter roads.

But even this austerity has not been nearly enough to plug the state’s budget holes. Fallin and the GOP have become reliant on raiding emergency reserves to make up the rest. This has left Oklahoma profoundly vulnerable to the next recession. According to Moody’s Analytics, only three states are less prepared for a downturn, based on the gap between their actual reserves and what would be required to stay afloat.

This reliance on emergency, nonrecurring revenue sources has also ensured that the state will face a new budget crisis each and every year. In 2017, the shortfall came in at nearly $900 million, and Fallin lost her nerve. The governor has pushed for (largely regressive) tax increases to restore education funding. But the state requires a three-fourths majority to impose tax hikes, and there are more than enough tea-party zealots in the legislature to block any piece of progressive taxation.

This week, Republicans in Oklahoma’s House of Representatives passed an emergency budget bill in a special session. The legislation does increase taxes on oil production. But instead of raising taxes on the wealthy, or ending the state’s exemption for capital gains — as Oklahoma Democrats had proposed — Republicans opted to cut $60 million from state agencies, and drain another few million dollars from the state’s rainy-day funds.

Oklahoma’s overwhelmingly Republican voters do not like this idea. As polling by the (left-leaning) Oklahoma Policy Institute demonstrates, there is no majoritarian support for gutting public schools, so as to let rich people pay low taxes, even in the heart of red America. 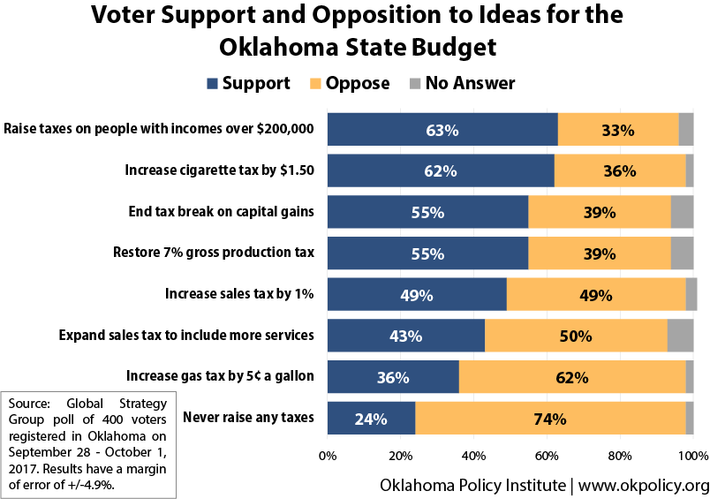 That poll also found 74 percent of Oklahomans saying that increasing teacher pay should be a major priority for their government — and 64 percent saying that expanding health-care access should be one — compared to just 38 percent who said the same about “lowering taxes.” This goes a ways toward explaining why Democrats keep winning special elections in the state.

Oklahoma’s Republican Party grew ever more fanatically committed to cutting taxes, even as shifting circumstances made it impossible to sustain basic public goods without raising them. Now, the discrepancy between the GOP’s fiscal priorities, and its voters’ material needs, has become stark enough to challenge partisan loyalties.

In Washington, Republicans are working hard to make Oklahoma’s experience a national one. On Thursday, the House passed multitrillion-dollar tax cuts on corporations and the wealthy, even as exigent circumstances — among them, increasingly frequent hurricanes, the decay of long-neglected infrastructure, a drug-overdose epidemic, and the retirement of the baby-boomers — are making it more expensive for the federal government to meet its basic obligations to the American people.

To be sure, many of Oklahoma’s budget problems are idiosyncratic. The United States is not nearly so vulnerable to oil shocks as Oklahoma is; the federal government can run deficits and print its own money, Oklahoma can’t; America’s median income is far higher than the Sooner State’s. But like Kansas and Louisiana before it, Oklahoma has demonstrated that the Republican Party’s prescription for prosperity is a snake-oil tonic with life-threatening side effects.

And when “conservative” voters see what the trade-offs of small government actually are — bigger McMansions for the elite, four-day school weeks for the rabble — they start longing for a new deal.

Congressional Republicans don’t seem the least bit concerned by the abject failure of their economic model in these states. Which makes sense: As a policy matter, the Republican economic agenda has only “failed” in Oklahoma if one assumes that the party’s goal is to improve the well-being of its constituents. If the GOP is more invested in the first-order effect of its fiscal policies (the concentration of wealth and power into the hands of an oligarchic elite), rather than their theoretical second-order effects (job growth fueled by a boom in private investment) then the supply-side model has been a smashing success.

As for the politics: Four losses in low-turnout special elections aside, the GOP retains overwhelming power in Oklahoma state government. The party has paid a similarly small price for its decimation of public services in Kansas. And while a Democrat now sits in the Louisiana governor’s mansion, the GOP still boasts control of both houses of its legislature.

But just because the Republican Party has largely escaped accountability for immiserating much of red America, doesn’t mean it always will. It’s true that Americans typically vote on the basis of identity, not policy, and that partisan identities are among the most resilient kind. But they aren’t unbreakable. Republicans are now committed, both financially and ideologically, to a fiscal agenda that demands a radical reduction in their own voters’ living standards. And GOP voters are becoming increasingly conscious of this fact.

A Quinnipiac poll released this week found that only 16 percent of Americans believe President Trump’s tax plan will lower their taxes, while 59 percent say the plan will favor the wealthy over the middle class. These are shocking figures given how much money Republicans and conservative outside groups have devoted to propaganda for their bill. And Quinnipiac is far from the only pollster to find most Americans meeting the GOP’s case for corporate tax cuts with incredulity. On Wednesday, SurveyMonkey found that 78 percent of Americans — including roughly 70 percent of Republicans — don’t believe that a tax cut on their employers would result in a paycheck increase for them, despite the White House’s relentless claims to the contrary.

This antipathy for the Republican agenda appears to be pushing some GOP voters into Team Blue’s tent. As Nate Silver notes:

Democrats lead by *11* points right now in polls of the House popular vote. I think people are neglecting how large an advantage that is in our highly partisan political environment. https://t.co/lvUj4G6GtC

Republican voters in deep-red states like Oklahoma may cling to their partisan identities tighter than most. But they also know the true costs of the GOP’s economic orthodoxy on a more visceral level than other Americans do. On Tuesday, that knowledge helped a 26-year-old, lesbian Democrat win a seat in the Oklahoma Senate. Someday, it just might turn large swathes of the American heartland purple — if Democratic donors decide to spend a bit less on pointless, pro-impeachment ad campaigns, and a lot more on liberating red states from reactionary rule.