For much of last year, the Democratic leadership campaigned on its opposition to Donald Trump, while left-wing activists implored the party to run on its support for progressive economics. In 2017, the tables appear to have turned.

In recent months, grassroots progressive groups — and some of the party’s most liberal donors — have called on Democrats to push for Trump’s impeachment. But the Democratic Establishment has waved away their pleas, arguing that the party will be better off emphasizing its “Better Deal” economic message, while delegating the case against Trump’s fitness for office to the president, himself.

This conflict has come to a head in recent days. Last month, billionaire environmentalist Tom Steyer called on Democratic candidates to commit to impeaching the president at the next available opportunity. The liberal megadonor then dropped $10 million on an ad campaign arguing for Trump’s ouster.

Nancy Pelosi was not pleased. As Politico reports:

“That’s a great ad,” Pelosi said twice, before rushing to plug the Democrats’ “Better Deal” economic agenda as the TV hit wrapped up.

Pelosi played it off, but privately she was peeved. She told lawmakers at a Democratic leadership meeting soon after that she had reached out to the Democratic megadonor to tell him that his $10 million ad campaign was a distraction…Pelosi has encouraged lawmakers to talk up what a Democratic majority can deliver for voters, plugging their economic message on repeat in hopes that it will eventually break through with voters.

In the early days of the Trump administration, the Democrats’ most caustic leftist critics assailed the party for putting too much focus on Trump’s Russia scandals and not enough on an affirmative economic agenda. That critique appears to have gotten through: On the (narrow) question of whether Democrats should downplay the Russia affair — so as to foreground pocketbook issues — Nancy Pelosi now appears more closely aligned with the “dirtbag” socialists of Chapo Trap House than the progressive Democrats of MoveOn.org.

The case for emphasizing economics is simple: The Republican Party’s dependence on libertarian billionaires has forced it to adopt a radically unpopular agenda. Red America may disdain Colin Kaepernick, unauthorized immigrants, and godless cosmopolitans, but even your average conservative Republican doesn’t like the sound of cutting $1 trillion from Medicaid to pad the passive income of the idle rich; or increasing the deficit by $1.5 trillion to fund corporate tax cuts, while sparing only $1 billion on the opioid epidemic.

In 2016, 73.5 percent of the American electorate espoused broadly left-of-center views on economic policy, according to a recent analysis of Democracy Fund Voter Study Group survey data. Democrats have everything to gain from polarizing the electorate on economic issues. And devoting (relatively) little bandwidth to Trump-bashing may aid that endeavor — especially considering how many Democratic senators are up for reelection in red states next year.

On the other hand, the case for Trump’s impeachment is pretty darn strong. Over the past few months, the president has repeatedly issued tacit threats of a preemptive military strike and/or nuclear attack against Kim Jong Un’s regime in North Korea. In a recent interview with the New York Times, Republican senator Bob Corker revealed that these threats did not represent some deliberate “good cop, bad cop” routine, but were merely the impulsive ravings of a man who sees the presidency as “a reality show.” The senator went on to say that Trump’s advisers have to prevent him from taking destructive actions on a regular basis, and that the president’s impulsiveness could spark an unnecessary world war.

This week, multiple high-ranking members of the Trump campaign were indicted for defrauding the U.S. government, while serving as covert agents of Vladimir Putin’s cronies in Ukraine. Oh, and one of the Trump campaign’s foreign-policy advisers admitted that he had tried to set up a meeting between the Republican candidate’s team and the Russian government — after being told that the Kremlin possessed stolen Clinton emails. One can hardly fathom what congressional Republicans would have done had Barack Obama ever provided them with such fodder for apoplectic outrage.

And campaigning against Trump probably makes more sense as a midterm strategy than it did as a general-election one. Midterms typically function as referenda on the incumbent administration. And they’re generally decided by turnout, not persuasion. Given these realities — and the fact that the Democrats’ road to a House majority runs through historically Republican districts turned blue in revulsion to Trump — hollering about the president’s innumerable offenses to his office and human dignity might just be a winning play. 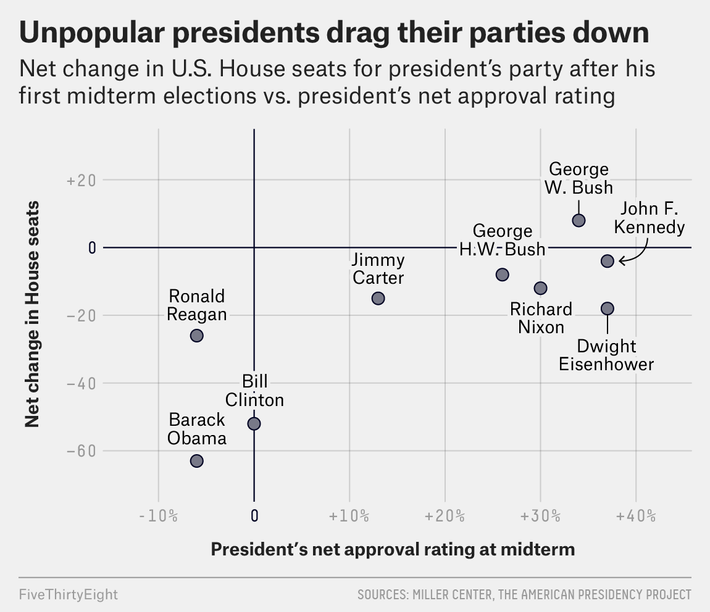 At the end of the day though, the most cogent analysis of the competing Democratic strategies might be “LOL nothing matters.”

“History generally shows that the out party in a midterm doesn’t typically need much of a message if the presidential party is unpopular,” Kyle Kondik, managing editor of the election-prognostication website Sabato’s Crystal Ball, told The New Republic in July. “Midterms are historically referendums on the ruling party. In other words, despite the Democrats’ internal fissures, opposition to Trump may be enough in 2018 for them to make significant gains.”

Democrats’ performance next November will be determined less by messaging than candidate recruitment, macroeconomic conditions, the GOP’s legislative performance, and what species of mess Trump decides to cook up in the weeks before Election Day.

Best then to use the campaign to proselytize for the party’s economic vision, and let Trump’s deficiencies speak for themselves. Stumping for a populist fiscal agenda may not make a huge difference in the 2018 battle, but establishing credibility on pocketbook issues will increase the party’s prospects of (eventually) winning the wider war.