One year ago, Democrats woke up to find an authoritarian insult-comic headed for the White House — and their party slouching toward oblivion.

The GOP had nominated the most widely reviled presidential candidate in American history — a man who suggested he’s a serial sex criminal, just a month before Election Day — and voters still evicted Democrats from the White House. Down ballot, things were even more dire. Republicans controlled the House, the Senate, 33 governor’s mansions, and 32 state legislatures — two more, and the GOP could unilaterally initiate a constitutional convention. Soon, they would paint the judiciary red.

The Obama legacy had mere months to live. The emerging Democratic majority was a wishful hallucination. The growing racial diversity of the electorate wasn’t giving progressives a permanent advantage — it was just making white working-class voters more reactionary. What’s more, despite Hillary Clinton’s fondest wishes, affluent, college-educated whites knew what side their bread was buttered on (the Trumpist GOP might be a tad gauche, but what really mattered to these suburbanites was keeping taxes low).

In Team Blue’s collapsing tent, tensions were high. A civil war loomed between Hillarybots and Bernie Bros; or economic populists and identitarians; or the grassroots and the Establishment. The party was focusing too much on Russia and not enough on pocketbook issues — or, perhaps, the reverse. It was too concerned with appealing to Obama-Trump voters — or on solidifying its grasp on Romney-Clinton ones. It was failing to make a necessary pivot to the center; or to march to the left; or to break with “identity politics”; or to energize nonwhite voters. Amid all the hand-wringing, backbiting, and bouts of catatonic shock, there was only one thing all of blue America’s residents could agree on: The Dems were in disarray.

What a difference a year makes. The first 12 months of the Trump era have been terrible for the country — but they’ve been better for the Democratic Party than most ever would have thought.

The party’s performance in Virginia Tuesday was nothing short of a triumph. In the face of a vicious, race-baiting Republican campaign; manufactured controversies over Confederate monuments, (nonexistent) sanctuary cities, and kneeling NFL players — not to mention a rain storm that singled-out the bluest parts of the state — Democratic gubernatorial candidate Ralph Northam defeated Ed Gillespie by a near double-digit margin. As of this writing, Democrats are expected to overpower GOP gerrymandering and reclaim Virginia’s House of Delegates — a result that most election analysts had thought impossible.

These victories suggest that many of the party’s post-2016 fears were fallacies. Ralph Northam centered his campaign on (a decidedly, low-key brand of) economic populism, savaging Gillespie as a tool of corporate interests, and attacking Trump for proposing cuts to federal funding for health care and education — and won the wealthiest county in the United States by more than 20,000 votes. Down ballot, Virginia elected its first transgender and Democratic Socialist state legislators, developments that belie centrist hand-wringing about both “identity politics” and left populism.

This says a lot about turnout.

To take back the House in 2018, Democrats will need to build on Hillary Clinton’s gains in wealthy suburbs, while inspiring nonwhite voters to come to the polls at aberrantly high levels. The party did both on Tuesday night.

What’s more, Team Blue’s triumphs in Virginia — and effortless win in New Jersey — only confirmed the good news that has been staring Democrats in the face for months. Since mid-July, Democrats have maintained a roughly ten-point advantage over Republicans in generic polls of the 2018 congressional race. In special elections, Democrats have consistently punched above their weight in traditionally red districts.

This early strength has spawned a banner crop of Democratic House candidates; filled their coffers with an eyebrow-raising amount of cash; and scared a growing list of Republican incumbents into retirement.

On November 9, 2016, most Democrats presumed their Senate caucus was bound to get smaller before it got larger. Today, that’s far from certain. The party’s 2018 incumbents in the deep red states of North Dakota, Montana, West Virginia, Indiana, and Missouri all boast net-positive approval ratings. On the other side of the aisle, Republicans have forfeited the advantage of incumbency in Arizona, made Dean Heller deeply vulnerable in Nevada, and somehow managed to give a Democrat a fighting chance in Alabama.

Meanwhile, Obamacare didn’t just survive its death panel — it’s come back thriving. Despite a massive, well-funded propaganda effort against the law, Barack Obama’s signature achievement is more popular today than it was one year ago. And in defiance of an unprecedented campaign of administrative sabotage, early sign-ups for the law are outpacing last year’s by a roughly 2-to-1 margin. By contrast, the twin pillars of the GOP agenda — reductions in federal health-care spending and deficit-financed cuts to corporate tax rates — don’t even command majority support among Republican voters. And a recent Pew Poll finds Democrats enjoying at least a slim advantage on every major issue in American politics. 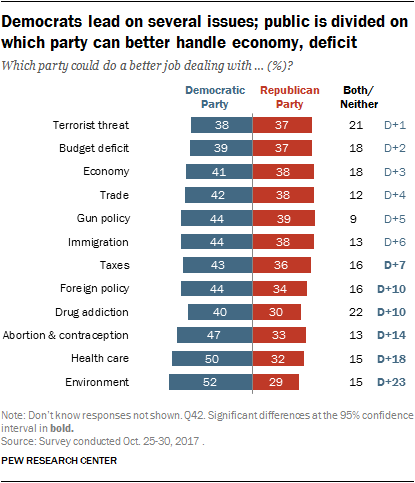 The party has secured this popular advantage, even as its leading lights have moved unapologetically leftward, with the Senate’s top 2020 prospects embracing a social-democratic platform of universal health care, free public college, universal child care, and paid family leave.

Until Tuesday night, all these auspicious developments were shadowed by the Democrats’ failure to win any high-profile, federal special election (such failure should have been expected — the special House elections were fought in districts that the Trump administration had deemed safe enough to pluck GOP incumbents from). But now, that dour disclaimer has fallen away.

But if you told the average progressive one year ago that, by this time in 2017, Obamacare would still be around and Democrats would be leading the generic ballot by double digits; overperforming in special elections by historic margins; embracing progressivism and winning over independents, simultaneously; beating Republicans with transgender and socialist down-ballot candidates — all while the Trump administration would be consumed by legal problems and legislative impotence — I think said progressive would have been elated.

It’s November 8, 2017: Obamacare is alive and Ed Gillespie’s political career is dead. The Dems are officially in “array.”

+Comments Leave a Comment
One Year After Trump’s Win, the Democrats Aren’t in Disarray

THE FEED
11:18 a.m.
politics
politics
Rudy Goes on Media Blitz After Supposed Near-Fatal Slap
By Benjamin Hart
The man who clapped Giuliani on the back on Sunday has been arrested for second-degree assault.
7:00 a.m.
#metoo
#metoo
The First Female Referee in WWE Says Vince McMahon Raped Her
By Abraham Riesman
Rita Chatterton does not want to be forgotten.
6/26/2022
life after roe
life after roe
Outrage, Uncertainty, and Instant Abortion Bans After Roe v. Wade Overturned
By Intelligencer Staff
Some Republican leaders are already calling for a nationwide ban, while protesters assemble outside the Supreme Court to express their outrage.