When analysts calculated, a month ago, that the preliminary framework of the Republican tax plan would overwhelmingly benefit the rich, Republicans insisted these were vicious lies, because the details on the proposal had not yet been finalized. Number-crunchers were “claiming to be clairvoyant about details of the Republican reform ‘framework’ that haven’t been proposed,” huffed the Wall Street Journal editorial page. House Ways and Means Committee chairman Kevin Brady complained that any calculations relied on “a variety of overreaching and unrealistic assumptions about policy decisions members of Congress still have to make.”

Well, now the House GOP has filled in all the missing details, and the result … would overwhelmingly benefit the rich. An analysis by the Institute on Taxation and Economic Policy, a left-leaning think tank whose calculations are broadly respected, finds that the highest-earning one percent of households would receive nearly half the direct benefit of the tax cuts. Specifically, the richest one percent, who earn 22 percent of all income, and pay 36 percent of all federal taxes, would get 48 percent of the Republican tax cuts.

As a percentage of their income, the very affluent would gain far more than anybody else: 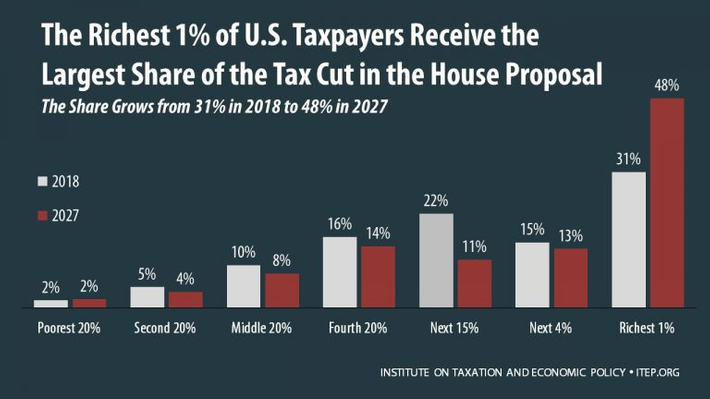 Republicans think it’s both more fair and more efficient to change the tax code so rich people pay less. But there isn’t a legitimate factual debate about whether this is a first-order effect of their plan. It simply is.

+Comments Leave a Comment
The Richest One Percent of U.S. Gets Half the Trump Tax Cuts