Last month, the American economy added 261,000 jobs — payroll growth that pushed the unemployment rate down to 4.1 percent, a low unmatched since the end of the Clinton presidency. Over those same 31 days, Donald Trump’s approval rating fell by 2.1 percent in RealClearPolitics’ poll of polls, with just 39 percent of the public expressing a favorable opinion of their nation’s leader on All Hallow’s Eve.

Never in recorded history has an American president been this unpopular, this early in his tenure.

It’s hard to overstate what a remarkable achievement this is — and not just for Trump himself. Generally speaking, the ruling party enjoys credit — and suffers blame — for America’s macroeconomic conditions. And yet, despite inheriting one of the strongest economies the U.S. has seen this millennium, the Republican Party spent much of the past month trailing Democrats by double digits in the 2018 congressional race: By October’s end, roughly 47 percent of Americans wanted Democrats to take over Congress next year, while just 38 percent wanted to see the GOP retain it, according to FiveThirtyEight’s poll aggregator.

Now, many have argued (including myself) that the headline economic statistics overstate the economy’s true strength. Unemployment is low, but so is labor-force participation among prime-age workers. Growth is fairly solid, but the distribution of gains is profoundly unequal. Wages are rising by an annual rate of 2.5 percent — but that’s far lower than economists would expect in a labor market this tight. Median household income has finally eclipsed the record it set in 1999, but household debt is also near record highs.

Nevertheless, Americans’ perception of their economy tends to be based less on its absolute strength, than the direction it’s moving. And compared to the conditions our beleaguered working class has become accustomed to this century, the 2017 economy looks pretty good. As polling analyst Harry Enten has noted, Americans actually give Trump’s handling of the economy a positive approval rating. In fact, the gap between how Americans feel about the president’s economic management — and his overall job performance — has never been this vast. 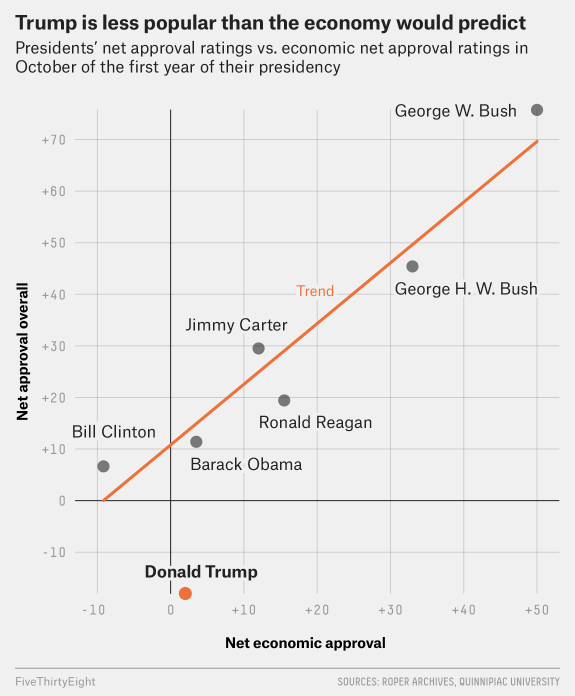 If Trump had spent his entire presidency golfing — pausing only to read, verbatim, statements carefully scripted by Reince Priebus — while congressional Republicans did nothing more controversial than rename post offices after universally admired historical figures and celebrities ( Jackie Robinson, Dwayne “the Rock” Johnson, etc.), they all might very well be cruising toward reelection.

But instead, the president has devoted much of his first year in office disparaging war widows, praising neo-Nazis, threatening to shut down media outlets, begging the FBI to prosecute his political enemies, obstructing justice, tweeting tacit threats of a nuclear first strike on the Korean peninsula, encouraging police officers to brutalize criminal suspects, and countless other vile hobbies — while the congressional GOP has worked diligently to take health insurance away from 20 million people and slash $1 trillion from Medicaid in order to pad the passive income of millionaire investors, add $1.5 trillion to the deficit for corporate tax cuts (but only $1 billion for the opioid-overdose public-health emergency), and end subsidies that benefit penniless orphans to allow the heirs of multimillion-dollar estates to avoid paying any taxes on their parents’ capital gains.

All of which is to say: Trump and the GOP have worked hard to earn the public’s contempt.

The political implications of this fact is unclear. On the one hand, if the economy remains strong as the 2018 elections draw near, it’s possible that voters could revert to historical habit and reward the GOP for presiding over job and wage growth. And much the same could be hypothesized about the 2020 election.

On the other hand, one might conclude that Trump and the Republicans are already fully enjoying the tailwinds of a strong economy — and that the moment those winds change, their standing with the public will plummet to unprecedented depths.