Who knew responding to sexual-misconduct allegations could be so complicated? Photo: Pool/Getty Images

After wrapping up his statement at a joint press conference last week, Chinese president Xi Jinping summoned an interpreter backstage to pose a question to President Trump: “Who is Roy Moore?”

During his 12-day Asia trip, Trump ignored questions from reporters seeking his opinion on the Alabama Senate candidate, who’s been accused of sexually assaulting underage girls when he was in his early 30s. But now that he’s back in D.C., Trump won’t be able to avoid the question for much longer; now even Fox News is calling on the president to make a move.

The White House did issue an equivocal statement a day after the story broke. “Like most Americans, the president believes we cannot allow a mere allegation, in this case one from many years ago, to destroy a person’s life,” White House Press Secretary Sarah Sanders said. “However, the president also believes that if these allegations are true, Judge Moore will do the right thing and step aside.”

Initially, many Republican leaders suggested that they too would need to see more evidence before abandoning Moore. But their tone shifted in recent days as a fifth woman accused Moore of sexually assaulting her when she was 16, presenting a yearbook signed by Moore to back up her account. Senate Majority Leader Mitch McConnell said he “believed the women,” and now every Senate Republican has withdrawn their support from Moore. “Innocent until proven guilty is for criminal convictions, not elections,” Mitt Romney noted.

On Tuesday night, the Republican National Committee backed out of its joint fundraising agreement with Moore, and some of his right-wing media defenders appeared poised to drop him as well. Sean Hannity, casting himself in the role of moral arbiter/hostage negotiator, issued an ultimatum on his program: Moore now has 24 hours to explain his inconsistent denials, or he must drop out of the race. (Hannity was not clear on what he’ll do if he doesn’t.)

Hannity happens to be facing an advertiser boycott over his Moore coverage, but other Fox News figures distanced themselves from the candidate as well. An hour earlier, Tucker Carlson criticized Moore for using Christianity “as a shield” — though, he could only fully express his disdain for Moore by bringing up various Democrats accused of unscrupulous behavior.

“He’s claiming to be the victim of bigotry,” Carlson said. “Now that’s what demagogues do when they are cornered. That’s what Al Sharpton does.” (Bill O’Reilly, who says he’s “mad at God” over the sexual-harassment allegations that landed Carlson in his 8 p.m. slot, did not come up.)

Moore still has some allies. While sources said former Trump chief strategist Steve Bannon is now having second thoughts about Moore, as of Tuesday night, his Breitbart News was still vigorously defending him. The site led with a poll suggesting that the scandal is only helping Moore, but Hannity’s challenge to Moore was prominently featured as well: 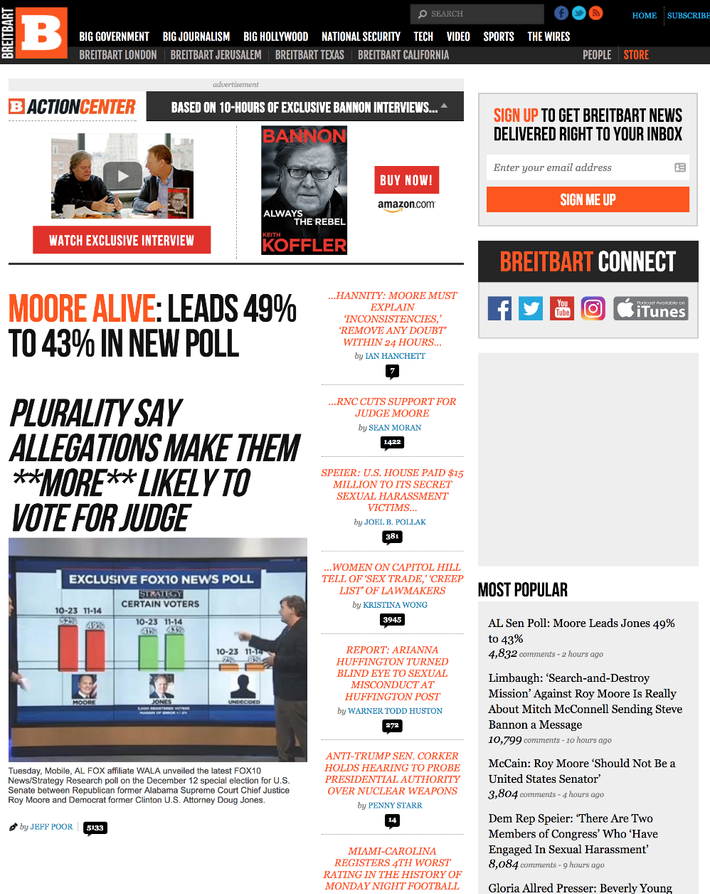 Moore was still pushing the idea that he’s the victim of a media conspiracy on Tuesday night. “Why do you think they’re giving me this trouble? Why do you think I’m being harassed by media and by people pushing allegations in the last 28 days of the election?” he said at a church conference in Jackson, Alabama.

Some still find that explanation more credible than the accounts of Moore’s five accusers — despite evidence that it’s Moore’s supporters who are pushing false information. Kayla Moore, the candidate’s wife, has shared false and misleading reports on Facebook. One suggested the restaurant where Moore allegedly assaulted a girl didn’t exist, though it’s featured in newspaper ads from the time. Another claimed — based on a screenshot of a tweet from someone who didn’t hear the news directly — that the Washington Post paid one of the accusers $1,000.

Someone even created false evidence in an effort to spread the media conspiracy angle. WKRG reported that some Alabamians received a robocall on Tuesday from a fake Post reporter — “Bernie Bernstein” — offering payments to people willing to trash Moore in the paper. It said:

Hi, this is Bernie Bernstein, I’m a reporter for the Washington Post calling to find out if anyone at this address is a female between the ages of 54 to 57 years old willing to make damaging remarks about candidate Roy Moore for a reward of between $5000 and $7000 dollars. We will not be fully investigating these claims however we will make a written report. I can be reached by email at albernstein@washingtonpost.com, thank you.

This willingness to believe unhinged conspiracy theories rather than credible reporting by mainstream news outlets is right out of President Trump’s playbook, and despite the shift on his favorite network, he may be tempted to side with the most fringe elements of the right rather than his Establishment foes, like Mitch McConnell.

“We will have to see what Trump does when he returns to the United States because he is distracted at the moment,” a Republican close to the White House told the Washington Examiner. “One can imagine he is going to weigh in the opposite of what the establishment wants Moore to do.”

Politico reports that in a phone call last week, McConnell pleaded with Trump to help him push Moore out of the race. At a Wall Street Journal/CEO Council event in Washington on Tuesday, McConnell said he expects to talk through options with the White House soon, and indicated that Moore will likely face immediate expulsion proceedings if he wins on December 12.

McConnell added that Republican leaders are also considering pushing a write-in candidate, who would have to be someone “totally well-known and extremely popular.” He even offered a suggestion: “The Alabamian who would fit that standard would be the attorney general.”

President Trump has made it clear that he’s angry with Jeff Sessions, but sending his attorney general back to Alabama in the midst of the Russia probe would present a slew of new problems. Senators have said they won’t confirm a new attorney general (who might be open to meddling in the Russia probe), and Sessions doesn’t appear interested in taking a demotion.

“I’d like to save the seat, and it’s a heck of a dilemma,” McConnell said. “It’s a very tough situation.”

In other words, this time President Trump is going to have to come up with a better strategy than deleting all mentions of the Alabama Senate candidate from his Twitter feed — and he needs to do it fast.