Congress gave corporate America a multi-trillion-dollar Christmas present on Wednesday — and several companies proceeded to dole out stocking stuffers to their employees. AT&T announced $1,000 bonuses for each of its 200,000 U.S. workers; Boeing pledged to commit $300 million to new investments, including $100 million for employee training and education; Comcast loudly celebrated the Trump tax cuts with bonuses for its employees (and quietly celebrated the end of net neutrality with higher prices for its consumers); Wells Fargo bumped its minimum wage to $15 an hour; and Fifth Third Bancorp, a bank based in Cincinnati, boosted its minimum wage and distributed $1,000 bonuses.

President Trump was pleased, and proudly cited AT&T’s announcement at a press conference. Evangelists for (“Trumped up”) trickle-down economics celebrated the long-awaited fulfillment of their prophecy. And blue America’s bitter scrooges impatiently explained why this outpouring of corporate largesse was actually bad.

Specifically, liberals noted the curious coincidence that most of the companies validating Trumponomics have an enormous financial interest in maintaining warm relations with the executive branch. The Justice Department has sued to block AT&T’s desired merger with Time Warner; if the telecom giant cannot reach a settlement with the DOJ that allows that merger to go forward, it stands to lose hundreds of millions of dollars. Comcast and Wells Fargo have much to gain and lose from federal regulatory policy, as the fights over net neutrality and the Consumer Financial Protection Bureau have well-illustrated. Boeing’s bread and butter are government contracts.

Given this context, one might suspect that these announcements were more of a political publicity stunt than the inevitable economic consequence of a cut in the corporate tax rate. And there are a few other causes for such suspicion:

(1) AT&T’s effective tax rate for the last eight years was 8.1 percent; Boeing’s was 5.4 percent. Both companies have put up record profits in 2017. It is manifestly not the case that America’s unusually high statutory corporate rate was preventing these firms from boosting their workers’ wages.

(2) Wells Fargo appears to have announced its intention to raise entry-level pay months ago.

(3) Corporations have spent $86 billion on stock buybacks this month. Which is to say: Companies appear to be giving workers a tiny fraction of the sum they’re returning to shareholders.

(4) The number of times the letters “PR” appear in this CNBC story predicting that more companies will follow AT&T’s lead:

“You’ll see more companies doing this,” said Quincy Krosby, chief market strategist at Prudential Financial. “It’s excellent PR after all the mantra across the aisle that it’s just a tax plan for the rich and for corporate America and for people who own stocks … It’s a good PR move, giving back to the folks in the company.”

“It affects the psychology of the moment. Giving back to your workers. This was a major victory for corporate America,” she said of the tax cuts.

She also expects to see more banks making announcements since they are a major beneficiary of not only the tax cuts, but also deregulation.

“It’s good PR. It’s good corporate citizenship,” said Jack Ablin, CIO of BMO Private Bank. “It’s Christmastime. It’s the holidays. It’s spreading the good cheer around. It’s probably from a communications and PR perspective smart, and probably proactive because they’re going to get pressure. They might as well do it ahead of time.”

Supporters of the Trump tax cuts may rebut all of this liberal grumbling with two words: So what? So companies are only putting more money in their workers’ pockets to curry favor with regulators, help sell a tax bill they like to the public, and paint themselves as socially conscious corporate citizens who understand the true meaning of Christmas? Whatever the reason, hundreds of thousands of American workers just got $1,000 richer. Why can’t progressives just be happy about that?

The short answer to this question is: seasonal affective disorder.

The longer, actual one is this: The point here isn’t that liberals aren’t happy that some Americans are getting raises. All else being equal, that is good news. But the Trump administration — and its corporate and conservative intellectual allies — are citing these announcements as proof that regressive tax cuts and deregulation are good for workers. If these wage increases were produced by political calculation, rather than economic incentives, then they’re unlikely to be broadly — or durably — enjoyed.

Further, if the most powerful political and economic actors in the United States are conspiring to mislead the public about the effects of (upwardly redistributive) legislation, it’s really important for Americans not to fall for it. And the weight of the evidence suggests that shared prosperity does not come from the generosity of bosses with miniscule tax burdens, but from workers with robust bargaining power.

Since 1973, tax rates on investment, corporations, and wealthy individuals have fallen precipitously — and so has the American worker’s share of productivity gains. 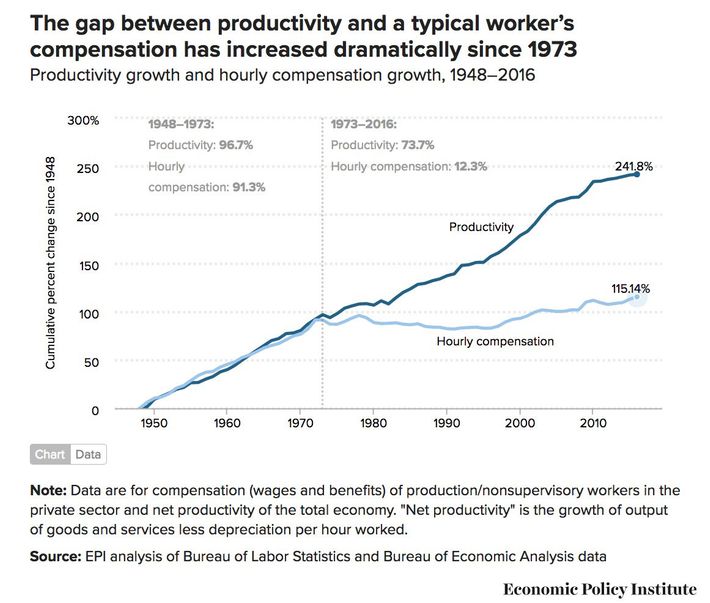 It is impossible to square this chart with the idea that cutting taxes on “job creators” is the key to raising wages. By contrast, if one makes the (common sense) assumption that the key to high wages is empowering workers — through unions, monetary and fiscal policies geared toward full employment, and strong safety nets that give them the freedom to walk off the job — then the graph makes perfect sense. Since the early 1970s, unions have been decimated, monetary policy has become far more concerned with inflation than full employment, and the safety net has grown more threadbare.

And the Trump administration has done virtually everything in its power to disempower workers even further. The GOP-controlled National Labor Relations Board just stripped most fast-food workers of the right to collectively bargain with national chains; the Labor Department has given restaurants permission to pocket $5.8 billion of their workers’ tips; and the president has restored the right of serial labor-law violators and wage thieves to receive lucrative federal contracts.

It’s certainly possible that the Trump tax cuts will boost investment and growth in the short-term — and that this could tighten labor markets, and produce a positive effect on wages. Fiscal stimulus has a way of doing that sort of thing. But the notion that this specific form of fiscal stimulus (giving great gobs of money back to economic elites) is the best way to improve the fortunes of working people is a lie.

It’s also a deeply unsettling — and downright un-American — vision of how a political economy should work. Trumponomics seems to boil down to: If workers vote the way their bosses would wish — and elect politicians who implement policies that increase corporations’ economic power and freedom from regulatory restraint — then their betters just might give them a larger share of their labor value, out of the kindness of their hearts.

This isn’t just antithetical to any left-of-center conception of sound economic policy. It’s also a repudiation of the (non-inherently racist, non-genocidal) founding ideals of our republic. The original American dream was that ordinary workers could achieve true political independence through economic self-sufficiency. The ideal republican citizen was the yeoman farmer or skilled artisan who relied on no master for his sustenance — and thus could exercise genuine autonomy in the political sphere. Economic empowerment was the precondition for political freedom.

When cash-flush corporations hand out raises to celebrate the enactment of unpopular policies, they send workers the opposite message: Political acquiescence is the precondition for economic gain.

Or, as the socialist philosopher “Woke” Bill Kristol puts it:

Isn’t there something creepy about corporations giving cash bonuses to employees explicitly because of the passage of certain legislation or because of specific regulatory actions? Doesn’t it have something of a Road to Corporatist Serfdom feel to it?