Tomorrow, Alabama voters will decide who they’d rather represent them in the Senate, an alleged serial sexual abuser of teenage girls (who believes that Muslims and women shouldn’t hold public office, that blacks were better off under slavery, and that his interpretation of the Bible supersedes Supreme Court decisions) — or a Democrat.

Polls suggest that this isn’t an easy choice for the Yellowhammer State. But that’s about all they establish, definitively. On Monday, a Fox News poll put Democrat Doug Jones ahead of (alleged) ephebophilic (and indisputable) theocrat Roy Moore by ten points — and an Emerson College survey put Jones behind by nine. Meanwhile, Monmouth University has the race tied; or Moore ahead by four; or Jones up by three, depending on whether one assumes that turnout patterns will most closely resemble those established by other 2017 special Senate elections, or the 2016 general election, or the 2014 midterms, respectively.

The wide variation in polls of the race — and Monmouth’s unusual decision to provide three separate projections of its outcome — are driven by the same basic problem: There is no precedent for this kind of election, and thus, no clear basis for predicting who will and won’t show up at the polls.

So, to model turnout for tomorrow’s election, you have to stuff a dodecagonal peg into a round hole. Some pollsters think that the 2014 midterms are the best model — there’s no better predictor of voting behavior than history and 2014 was the last non-presidential election year in the U.S. Others put more weight into voters’ self-reported enthusiasm. Usually, Democrats poll better among registered voters than likely voters, since the party has stronger support among demographics that have lower-than-average turnout rates (nonwhite, younger, and lower-income voters). But Fox News actually finds that Democrats are so much more excited to vote for tomorrow’s election than Republicans, Jones actually performs four points better among likely voters than among the electorate more broadly in their poll.

Here's an interesting finding... Fox News has Jones doing better among LVs (+10) than among RVs (+6). Most other pollsters have shown the opposite. https://t.co/jrdbyyEy74

SurveyMonkey, meanwhile, offers this helpful breakdown of all the different ways the raw data from their latest poll of the Alabama race could be interpreted, depending on which turnout model strikes one’s fancy. 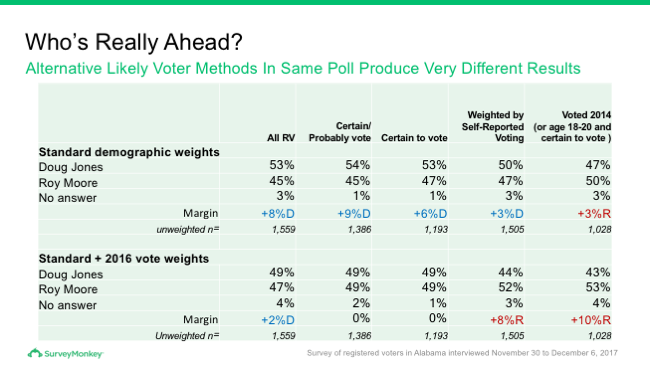 Further complicating matters is the significant number of undecided voters; the presence of write-in candidates; and the possibility that some Alabama voters are embarrassed to tell pollsters that they plan to vote for a sexual predator (or perhaps a Democrat).

But if you’re a liberal (and/or decent human being), here’s an optimistic story you can tell yourself: Jones will outperform his polling average because a lot of his worst surveys are landline-only. The Democrat’s support comes overwhelmingly from younger voters, who are unlikely to have a landline. The Fox News poll includes cell-phone users — and finds that Jones leads among that contingent by 30 points. Add to this the fact that few polls have captured the effect of Alabama senator Richard Shelby’s last-minute denunciation of Moore; Jones’s better-funded ground game; and the strength of Democratic turnout in special elections throughout 2017, and it’s clear that Jones is about to make Alabama blue again.

On the other hand, if you’re a conservative (and/or morally confused human being) you can tell yourself this: Doug Jones is a Democrat who is trailing in most polls of a race in Alabama. Occam’s razor says Roy Moore will rise again.

+Comments Leave a Comment
The Polls Agree: Jones Leads Moore by 10 — or Trails by 9