Why don’t any Democrats in Congress support the tax-cut bill? It is a mystery that has been gnawing at many Republicans (though at zero actual Democrats inside or outside Congress). “Our Democratic colleagues simply refused to participate in the process,” complained Senate Whip John Cornyn on ABC. “We probably could have made it better if they had.” Many Republicans have suggested the same conclusion: In their hearts, Democrats truly love cutting taxes for corporations and extremely wealthy heirs, but politics prevents them from saying so. “Obstructionist Dems trying to block because they think it is too good and will not be given the credit!” tweeted President Trump. “We’ve had a lot of very productive conversations with Democrats who I believe are intellectually there,” insists Ivanka Trump. “Their hearts are there but the party’s not there and the leadership’s not there.”

If it were true that Democrats secretly liked the tax cut, but only opposed it for political reasons, you’d expect liberal and centrist economists to support it; after all, economists don’t have to run for office. Nothing of the sort is in evidence. A University of Chicago survey of economists found almost total agreement that the Republican plan would increase the debt and would not substantially accelerate economic growth. It is impossible to find a left-of-center economist who supports the bill, while even conservative economists like Greg Mankiw, who shares the GOP’s objective of reducing taxes on the rich, has criticized their plan.

Tax lawyers have ripped the plan to shreds as a shoddily designed invitation for more loopholes and tax shelters. Even assuming the tax cuts work as intended, rather than opening up new and unintended avenues for tax avoidance by rich people, they would exacerbate inequality: 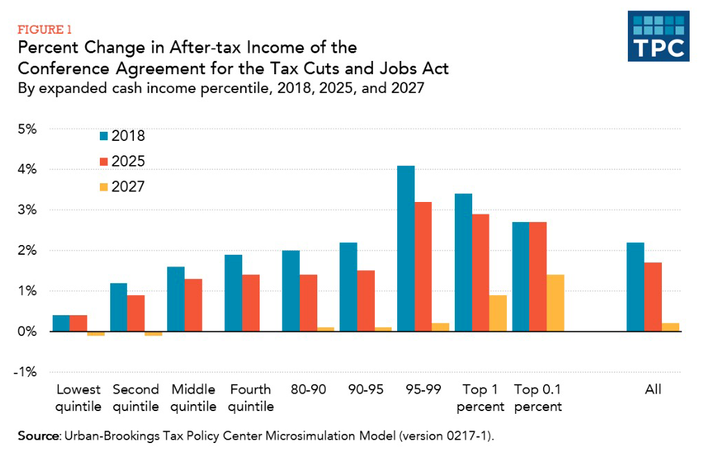 And that is not accounting for the spending reductions that will eventually be necessary to offset the loss of revenue.

And yet Democratic opposition remains a mystery conservative minds feel compelled to explore. A Wall Street Journal editorial elucidates the popular conservative theory that the Democrats oppose the Trump tax cuts because they have gone mad with hatred. “The 1986 tax reform was driven as much by Democrats as by Ronald Reagan,” the editorial notes sadly.

That is true. Democrats did support the 1986 Tax Reform Act, mainly because it was a tax reform act. The law eliminated preferences in the tax code and forced many businesses and individuals that had avoided taxes onto the tax rolls. The law was budget-neutral and distributionally neutral — in fact, it increased the overall effective tax rate on the rich.

Maverick right-of-center policy wonks like James Pethokoukis proposed tax reform that followed this pattern — reforming the tax code without a net tax cut or a net benefit for the rich. Democrats offered to work with Republicans on a bill to do a tax reform like this. Republicans declared those parameters unacceptable right from the outset. The GOP would only design a bill that reduced revenue and gave the rich a tax cut, and any bill that failed to do so was unacceptable.

Of course, Republicans truly believe cutting taxes for rich people is a moral good, and have every right to do it. But since their idea of a moral good is deeply unpopular, they have a congenital need to conceal their true intentions. Their displays of hurt and confusion are farcical. That Democrats refused to join an exercise Democrats find economically useless, fiscally irresponsible, and morally grotesque does not require any serious thought.

THE FEED
9:41 a.m.
early and often
early and often
The Most Explosive Revelations From Cassidy Hutchinson’s Testimony
By Margaret Hartmann
The ex–Mark Meadows aide testified that Trump lunged at a Secret Service agent on January 6 and said of the armed mob, “They’re not here to hurt me.”
9:36 a.m.
jan. 6 hearings
jan. 6 hearings
Liz Cheney Alleges January 6 Witnesses Are Being Intimidated
By Nia Prater
“He knows you’re loyal, and you’re going to do the right thing.”
8:31 a.m.
exhibit a
exhibit a
The Odds Are Going Up That Trump Could Be Charged
By Ankush Khardori
Cassidy Hutchinson advances the 1/6 committee’s theory of the case, though it’s not a slam dunk.

8:00 a.m.
investigations
investigations
How Leslie Wexner Helped Create Jeffrey Epstein
By Shawn McCreesh
A new documentary traces the relationship between the predator, his benefactor, and the New York media.
7:00 a.m.
early and often
early and often
Does Lee Zeldin Stand a Chance Against Kathy Hochul?
By Ross Barkan
It’s shaping up to be a good year for Republicans nationally, but that may only go so far in New York.
6/28/2022
politics
politics
Antonio Delgado Fends Off Challenge From Ana María Archila
By Nia Prater
The lieutenant governor wins the Democratic nomination for a full term, after a last-minute threat from a progressive endorsed by AOC.
6/28/2022
the national interest
the national interest
Republicans Are Trying to Cover Up Greatest Political Scandal in U.S. History
By Jonathan Chait
The GOP still won’t admit it even deserves to be investigated.
6/28/2022
politics
politics
Rudy Goes on Media Blitz After Slap on Back
By Benjamin Hart and Nia Prater
On Tuesday, Mayor Adams criticized Giuliani’s comments. Rudy responded “Tell Adams to go f- - - himself. What a f- - -ing scumbag.”
6/28/2022
january 6 committee
january 6 committee
Cassidy Hutchinson Shows Trump’s Complicity in the Attack on the Capitol
By Ed Kilgore
The former top aide provides a clear and damning account of the White House on January 6 and the man who started the riot.
6/28/2022
the money game
the money game
The Grand Ambitions of Crypto King (and Schlubby Billionaire) Sam Bankman-Fried
By Kevin T. Dugan
The extravagantly unkempt crypto founder seems to have a big new plan: buying up Wall Street’s plumbing.
6/28/2022
migrant crisis
migrant crisis
Dozens of Migrants Found Dead in Tractor-Trailer in San Antonio
By Matt Stieb
At least 50 people died, likely from heat exposure, in the country’s deadliest human-smuggling incident in recent memory.
6/28/2022
court appearances
court appearances
Ghislaine Maxwell Gets 20 Years
By Choire Sicha
Survivors of her and Jeffrey Epstein’s sex-trafficking ring spoke at the sentencing.
6/28/2022
early and often
early and often
The Wildest Revelations From the January 6 Committee
By Margaret Hartmann
Public hearings and press reports have revealed plenty, from Ginni Thomas’s emails to Ivanka disagreeing with dad to Trump’s remarks on hanging Pence.
6/28/2022
early and often
early and often
2022 Midterms: A Guide to the Races Worth Watching
By Ed Kilgore
A cheat sheet to keep track of all the crucial races, primary upsets, and campaign drama — Trump-fueled and otherwise — from now through Election Day.
6/28/2022
early and often
early and often
Republican Congressional Candidate Pulls a Todd Akin on Abortion
By Benjamin Hart
Virginia’s Yesli Vega called into question how many women become pregnant as a result of rape.
6/28/2022
encounter
encounter
Patrick Radden Keefe Is One of the Good Guys
By James D. Walsh
The author of Rogues talks about killers, criminals, and the “inescapable cruelty” of his work.
6/28/2022
the money game
the money game
The BuzzFeed SPAC Fiasco Is Only Getting Worse
By Jen Wieczner
Some ex-employees, it turns out, were able to trade while others could only watch the shares plummet.
6/27/2022
early and often
early and often
FBI Seized Phone of Trump Coup Plotter John Eastman
By Matt Stieb
The seizure took place the same day Feds raided Trump DOJ official Jeffrey Clark’s home, suggesting the January 6 criminal inquiry is heating up.
6/27/2022
u.s. supreme court
u.s. supreme court
Supreme Court Takes a Knee for School Prayer
By Ed Kilgore
The Court’s conservatives struck another blow against the separation of church and state by ruling to protect highly performative prayer.
6/27/2022
just checking in
just checking in
So What Is Rudy Giuliani Up to These Days?
By Margaret Hartmann
Trump’s former attorney has been keeping busy by dealing with January 6–related legal woes, making weird videos, and arguing with parade hecklers.
6/27/2022
the national interest
the national interest
The Anti-Abortion Movement Is Not Going to Start Caring About Families Now
By Jonathan Chait
The wan hope for a anti-abortion, pro-family right.
6/27/2022
israel
israel
Is the BDS Movement Too Alienating to Make Real Change?
By Ross Barkan
Pro-Palestinian activists have more sway than ever. But social shaming and ad hoc boycotts only go so far.
6/27/2022
sports
sports
Brittney Griner Seen in Handcuffs in Russian Court
By Matt Stieb
The WNBA star’s trial for allegedly possessing hashish oil begins July 1. If convicted, she could face ten years in prison.
6/27/2022
life after roe
life after roe
Why the Post-Roe GOP Will Only Get More Radical
By Ed Kilgore
Decades after partnering with the anti-abortion movement, the Republican Party has finally delivered. But ending Roe is just the start.
6/27/2022
#metoo
#metoo
The First Female Referee in WWE Says Vince McMahon Raped Her
By Abraham Riesman
Rita Chatterton does not want to be forgotten.