In searching for reasons his party is losing elections, Donald Trump needs to look in the mirror. Photo: Saul Loeb/AFP/Getty Images

Every political contest is unique in some respects. The three big statewide elections in the autumn of 2017 had all sorts of differentiating features beyond the common outcome of Democratic victories. In Virginia, an increasingly diverse electorate rejected the GOP’s lurch into borderline-racist appeals. In New Jersey, the Republican gubernatorial candidate was saddled with the heavy negative legacy of Chris Christie. And in Alabama, Republicans had a Senate nominee with the twin handicaps of an extremist background and credible allegations of sexual misconduct toward underage women.

But underlying all of these races was a big thumb on the scale, one that we can expect to persist into 2018, even if Republicans find fabulous candidates with brilliant strategies and no skeletons in the closet: the GOP’s control of the White House, and the singular unpopularity of its occupant.

Burn this into your brain if you want to understand the elections just ahead: The party that controls the White House almost always does poorly in the midterms, and it does very poorly when the president’s approval rating is low. This graph of first midterm performance in House races is the most relevant. 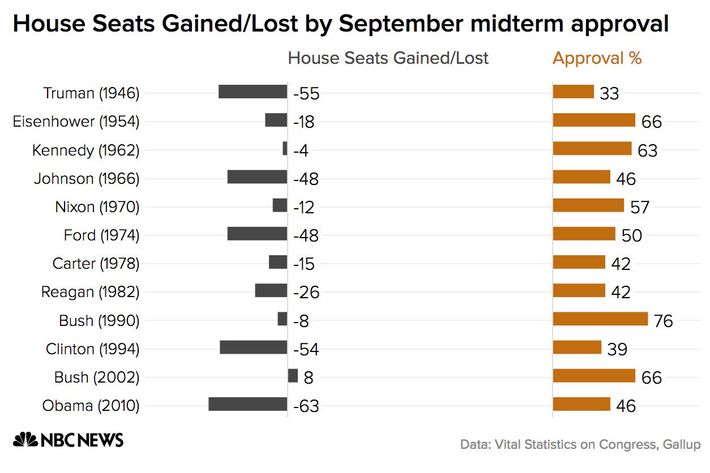 The only presidents who failed to experience double-digit House losses in their first midterms had job approval ratings of 63 percent or higher. According to the RealClearPolitics polling averages, Donald J. Trump’s approval ratings as president have ranged from a high of 46 percent just after his inauguration to a low of 37 percent, right now. There isn’t much variation, and what variation we’ve seen is a slow but steady erosion of his popularity. Given his record and his incessantly polarizing style of leadership, the odds of Trump achieving 60-plus percent approval ratings before next November are vanishingly low, barring some national catastrophe. So partly via his own shortcomings and partly because it’s just how American politics works, his incumbency is going to be a drag on virtually every Republican candidate next year.

And that’s not even taking into account Trump’s particular issues, including the fact that this may be the worst time in American history to have a party leader with his record of alleged sexual misconduct toward, and a bad attitude about, women. As Jonathan Chait observes, the revelations about Trump in the Access Hollywood tapes in combination with what may soon become an epidemic of Republican members of Congress being driven from office because of similarly piggish behavior could be really toxic in 2018. Add in Trump’s unique ability to mobilize Democrats against him (to an extent that, in retrospect, makes George W. Bush look like a model of bipartisanship), and you have a Trump problem for Republicans that simply cannot be ignored or minimized.

To a large extent, of course, there’s not a lot Republicans can do about it. But GOP efforts to mitigate the damage from Trump are complicated considerably by the president’s own ego-driven inability to accept responsibility for it. After the Virginia gubernatorial contest, Trump blamed Ed Gillespie for failing to more explicitly embrace him.

Ed Gillespie worked hard but did not embrace me or what I stand for. Don’t forget, Republicans won 4 out of 4 House seats, and with the economy doing record numbers, we will continue to win, even bigger than before!

And that’s after Gillespie emulated Trump’s own nasty cultural themes, despite their incompatibility with his past record and persona. And following last night’s disaster in Alabama, a race in which Trump endorsed two different Republicans and campaigned for both, it was still not his fault:

If last night’s election proved anything, it proved that we need to put up GREAT Republican candidates to increase the razor thin margins in both the House and Senate.

Maybe so, but it also proved that the president didn’t have the political strength to pull a Republican candidate across the line in a state he carried by 27 points just last year. Trump is not the first POTUS to discover that he is suddenly a down-ballot millstone after hearing the strains of “Hail to the Chief” for a year or so. But his addiction to blame-shifting could send his party off on all sorts of wild goose chases for “fixes” that won’t fix anything. And heading toward 2018, Republicans do not have the luxury of being able to waste time and energy assuaging Trump’s ego.