There is an alternative. Photo: Spencer Platt/Getty Images

Every few months, Thomas Piketty (and/or a handful of other economists with a social conscience) will remind the world that a tiny elite is binge-eating the global economic pie while 7 billion humans fight for their table scraps. Journalists will then aggregate some alarming statistics and edifying charts; progressives will share these over social media, adorned with red-faced emoji (and/or jokes about guillotines) — and congressional Republicans will carry on trying to establish a special, zero-percent tax rate for people who inherit private islands.

All of which is to say: It’d be understandable if you felt too familiar with — and hopeless about — the inequities of late capitalism to summon much enthusiasm for reading the 2018 World Inequality Report.

But it is a remarkable document, one that consolidates research from Piketty and more than 100 other economists into a broad overview of global income-and-wealth inequality. So, if you want to get a truly holistic perspective on the inequality problem — and how it can be solved — it’s worth digesting the report’s key findings:

Since 1980, the richest 0.1 percent of the world’s population increased its collective wealth by as much as the poorest 50 percent.
The 7 million richest humans (i.e., the top 0.1 percent) on the planet captured 13 percent of all economic growth over the past four decades — about as much as the poorest half of the world population (about 3.8 billion people). The top 0.001 percent (i.e., the wealthiest 76,000 people on Earth) claimed a hefty 4 percent of all economic gains.

The top one percent, meanwhile, lay claim to 27 percent of global wealth growth — a fortune facilitated by a steep rise in the cohort’s share of global income beginning in the early 1990s (right after the Soviet Union fell). 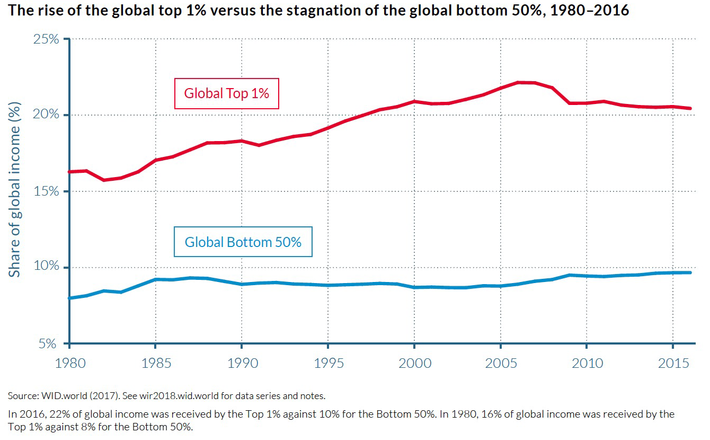 The global middle class has seen virtually no income growth over the past four decades.
While the rich have gotten (grotesquely) richer over the past 40 years, the poor haven’t gotten poorer — not on a global scale, anyway. Socialists have plenty of legitimate gripes with the neoliberal order. But it is true that the fortunes of the world’s most vulnerable people have improved significantly in recent decades. The gains just would have been far greater — like, “Poverty? What’s poverty?” greater — had the fruits of global growth been distributed more progressively.

But the global middle class — a category that includes virtually every non-rich person in the United States and Western Europe (by global standards, most impoverished Americans do not qualify for “poverty,” at least in this report’s estimation) — really has been all but locked out of economic growth since 1980. 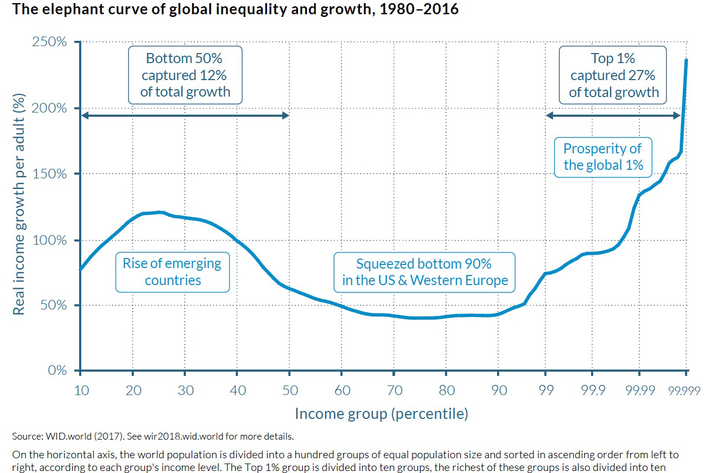 If you’ve wondered why so many electorates in the U.S. and Western Europe have lost faith in Establishment political parties, this is one compelling answer.

Inequality isn’t an economic inevitability, but a political choice — and American policy makers have chosen to accelerate its growth.
Still, Americans and Western Europeans have experienced the past four decades of macroeconomic change very differently. American politicians and public intellectuals will often attribute the rise of inequality to unstoppable economic changes (automation, globalization) that have intensified meritocratic pressures (“average is over”). But the fact of the matter is that our nation’s gargantuan economic gaps are the product of our elected representatives’ policy choices. 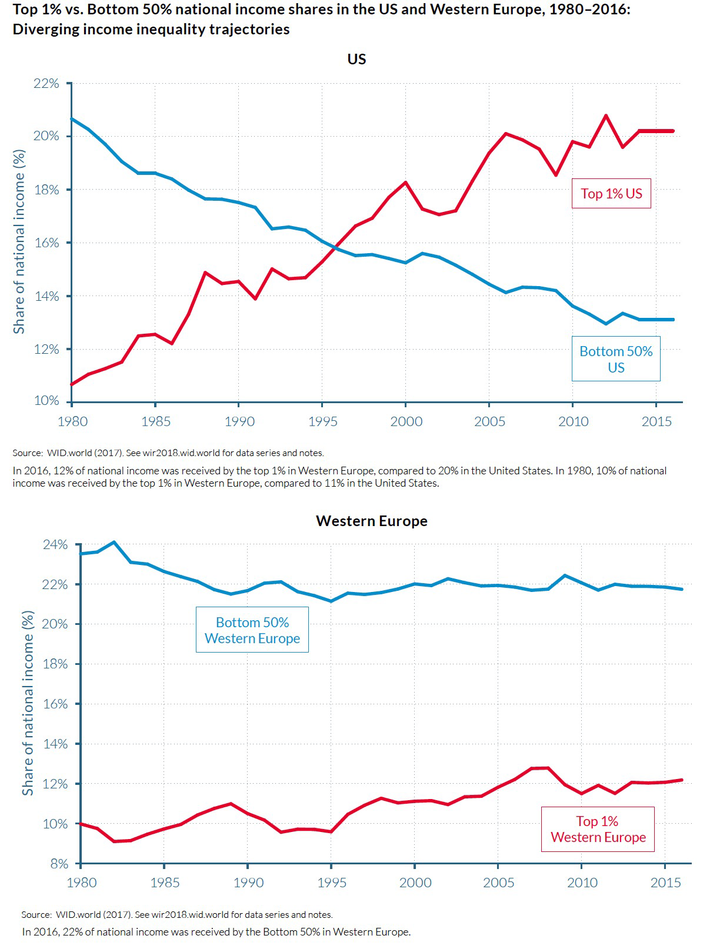 If you’ve ever wondered why Americans’ trust in institutions has cratered in the decades since Reagan’s inauguration, this is one compelling answer.

While individuals have become richer in recent decades, governments have become poorer.
In 1970, net private wealth in most nations was worth about 200 to 350 percent of national income; it’s worth between 400 and 700 percent today. Meanwhile, net public wealth (which is to say, public assets minus public debt) has declined significantly in China and Russia — and actually turned negative in the United States and United Kingdom. This shift in global balance sheets — with assets moving away from the public-sector column and into the private one — “arguably limits government ability to regulate the economy, redistribute income, and mitigate rising inequality,” the researchers write. 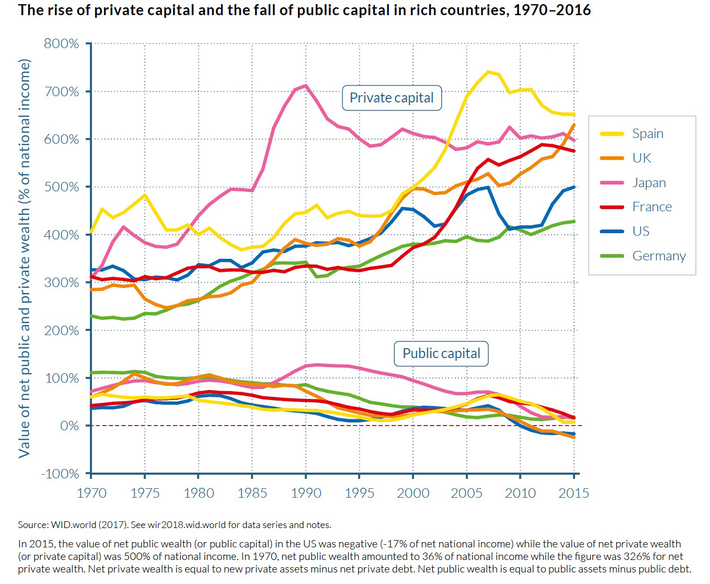 More inequality means more absolute poverty.
This might seem obvious. But when American conservatives wish to downplay the significance of inequality (without arguing that the poor deserve to go hungry) they insist that relative income disparities don’t really matter. No one wants an egalitarian economy in which everyone is poor — and all too often, they argue, attempts to make the economy more equal end up stifling growth, and thus, leaving those at the bottom worse off than they’d have otherwise been.

This is incorrect for a lot of reasons (chief among them, inequality is actually bad for economic growth). But Piketty & Co. provide the most obvious one — a more egalitarian distribution of income generally means less absolute poverty. 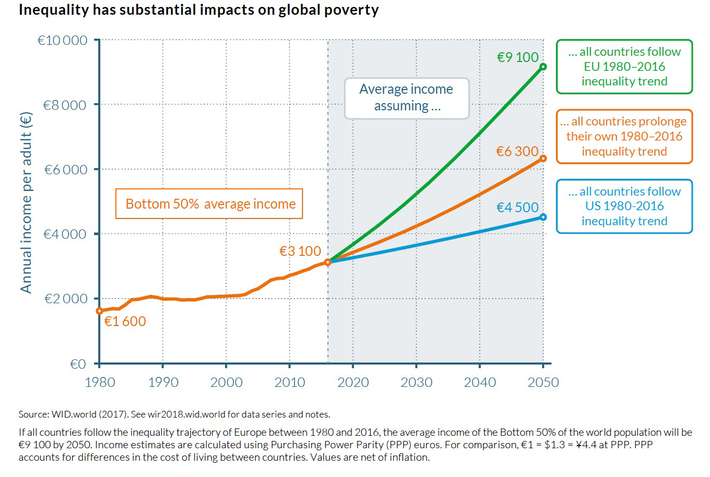 There is no mystery to solving inequality — you just have to take money from rich people and give it to everyone else.
The report ends with three basic policy recommendations:

1) Countries need to raise taxes on their rich citizens.

Specifically, nations should reestablish confiscatory top marginal rates —both to reduce the after-tax income of the wealthy — and to encourage them to pursue less pre-tax income. Conservatives bemoan high marginal rates precisely because they discourage the rich from trying to acquire more wealth — and thus, from adding more value to the broader economy. But Piketty’s research suggests that the bulk of the one percent’s gains these days come from rent-seeking — which is to say, from extracting value, not creating it.

Further, given the size of national debts, Piketty strongly advises countries to expropriate some of the one percents’ wealth, in addition to its income.

2) Countries need to help each other keep tabs on their rich citizens’ capital, so that wealth has nowhere to run or hide.
The global super-rich are currently stashing enough wealth in tax havens to account for more than 10 percent of global GDP. A global financial registry — transparently listing ownership of all financial assets — would bring a good chunk of those funds back into the public coffers.

3) Countries need to redistribute the rich’s money to the masses — through both cash transfers, and investments aimed at equalizing access to a quality education, healthy environmental conditions, and stable employment. 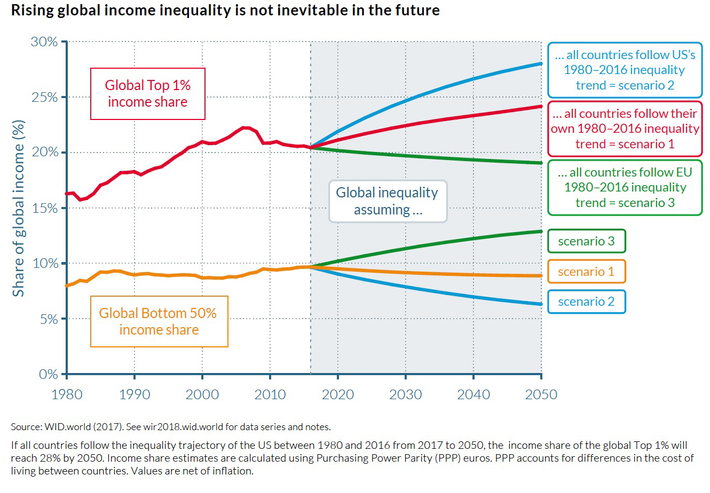 Obviously, there are details for the wonks to work out; poorly designed government programs can have unintended, adverse effects. But the broad strokes of what needs to be done on the policy front are perfectly clear.

How we’re supposed to build a politics capable of implementing those policies, however, is a genuinely difficult question.

+Comments Leave a Comment
Inequality Is Rising Globally — and Soaring in the U.S.