Mike Cernovich on his livestream, answering questions on Reddit.

Citizen journalist Mike Cernovich, one of the best sources for unhinged accusations of pedophilia, learning about his book Gorilla Mindset, and relentless self-promotion of Mike Cernovich, decided to do an Ask Me Anything on Reddit. And it’s going about as well as you’d expect.

There are many, many questions poking fun at Gorilla Mindset, Cernovich’s book that promises to teach you how to “live a life others don’t even dare dream of.”

There are several questions about Cernovich’s extremely sketchy past, which includes a post titled “When in Doubt, Whip It Out,” which advocated men exposing themselves to women in cars, claiming “date rape doesn’t exist,” and (by his own admission) being accused of rape in 2003.

There’s a question about his attempt to expose Chuck Schumer, which possibly included working with disgraced journalist Charles C. Johnson to shop around a forged document that accused Schumer of sexual harassment, while also burning Cernovich for living at his wife’s parents’ house:

There was the very good question of why he was even doing an Ask Me Anything:

There was also a seemingly sincere question that allowed Cernovich to assert that there are “biological” differences — a “fundamental, DNA level” — between those on the right and left: 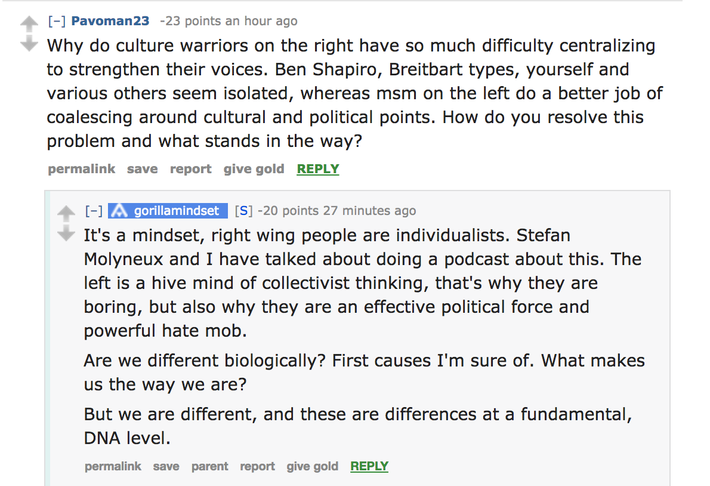 And there were questions that managed to touch on nearly all of these topics: 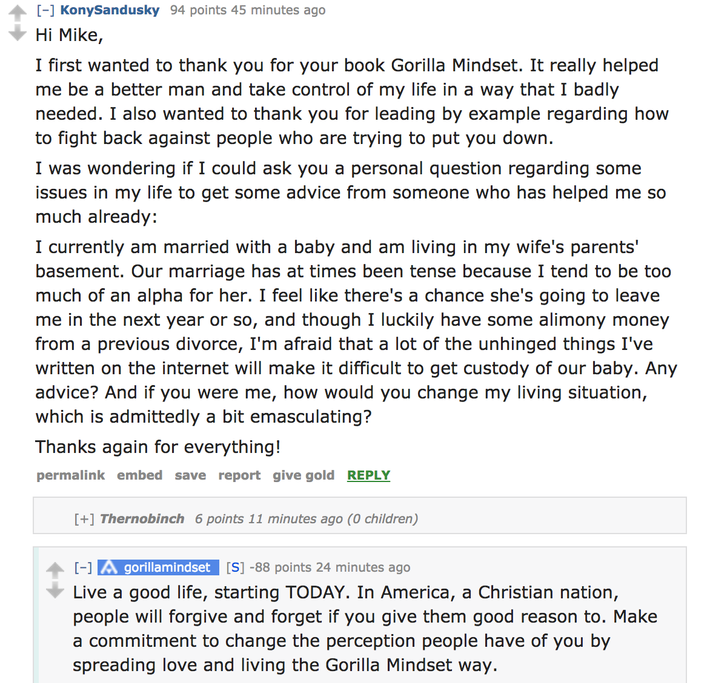 For true masochists who want the full Mike Cernovich experience, you can watch this livestream of Cernovich as he answered questions, which mainly consisted of his wife helping find questions that weren’t people roasting him to answer, and then getting so worked up he started hooting and hollering and waking up his young infant. It’s the true Gorilla Mindset in action.