Herculaneum is, in fact, not the town where Hercules was born. Photo: ClaudiaRahmanD via Twitter

Are you playing HQ, the app-based trivia show from the creators of Vine hosted at 3 p.m. and 9 p.m. each day by an oddly endearing dude named Scott? You should be. It’s fun. You could win actual money!

The problem is, it’s hard: After the first few gimmes, the questions get tough. Which means that a lot of people are trying to cheat the system. During today’s game, for example, viewers were treated to questions about, variously, the Swiss Army knife, the planet with the hottest surface temperature, the Italian town of Herculaneum, and the television show Archer.

And here’s a look at Google Trends for the search terms “Swiss army,” “hottest planet,” “Herculaneum,” and “Archer” for the afternoon. Can you guess what time HQ starts? 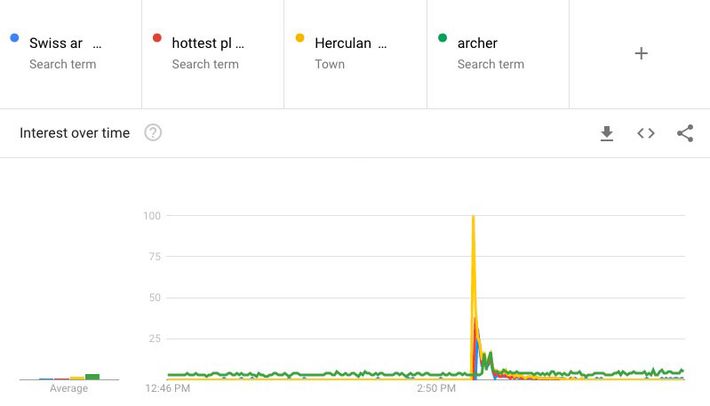 Yes, that eye-popping spike for “Herculaneum” around 3 p.m. is the HQ Effect.

For comparison, here’s a look at key terms from five questions from Sunday night’s 9 p.m. game. It’s a little easier to visualize: 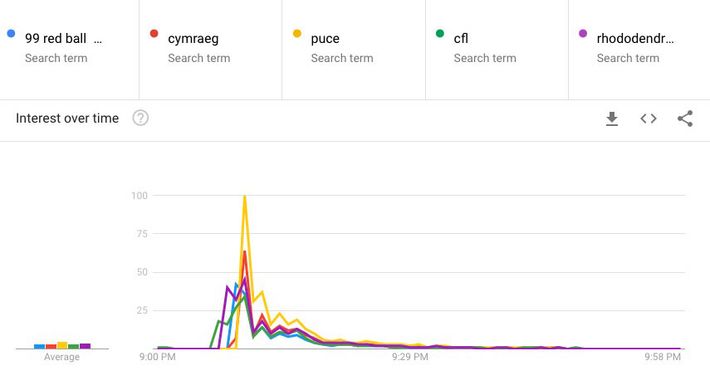 These searches aren’t one-offs, either. For each term, the related searches are also terms for HQ questions. Which means if you’re searching for the answer to one HQ question, you’re probably looking up the answers to several others. Even better is Google Trends’ breakdown of HQ questions by state: This afternoon, the Northeast and Southwest were seeking out “metonym,” while the Midwest was looking up “synesthesia.”

But: Is this actually working as a cheating strategy? You only get ten seconds from the time Scott starts reading each question in HQ to input your answer. Which means if you’re going to attempt to beat the system, you’ve got to be able to read the question, process it, search the term you want, and select an answer in rapid succession. Alternatively, it’s possible these searches are less about cheating and more about that nagging well, now I’ve got to know what a rhododendron looks like feeling that plagues you after getting a question wrong. (Several of the terms seem to spike in the moments just after the HQ question would have been answered.)

Clearly, the art of the HQ Google all depends on how much of the question you already understand. If you’re presented with three nouns and asked to pick the metonym … and you don’t know what a metonym is, you’re probably not going to have enough time. But if you’re asked which of three shows isn’t an NBC affiliate and you’re certain about one of them, that might just be enough time to look up The Tomorrow Show and find out it aired on NBC, giving you just enough milliseconds to select the third choice and continue with the game.

+Comments Leave a Comment
The HQ Effect: Everyone’s Trying to Google-Cheat at Trivia