Two weeks ago, the Senate passed a tax-cut bill that would have delivered 62.1 percent of its benefits to the richest one percent of Americans. A slew of public opinion polls subsequently showed large majorities of the public opposing the GOP tax plan — with a USA Today/Suffolk University poll declaring it the least popular piece of major legislation in three decades. Virtually all of these surveys found that this widespread opposition was rooted in the perception that the bill would benefit the wealthy and corporations more than it would help the middle class.

Now, that figure comes with a caveat: The Republican tax plan before 2025 is very different than the Republican tax plan after that year. Due to complicated Senate rules, GOP lawmakers had to prevent their tax package from adding to the deficit after 2027. But the party was ideologically committed to passing a permanent corporate tax cut — and politically committed to giving the middle-class a tax break in the immediate term.

They squared this circle by writing a bill that cuts taxes on virtually everyone in the short-term — but only benefits the wealthy and corporations in the long run. 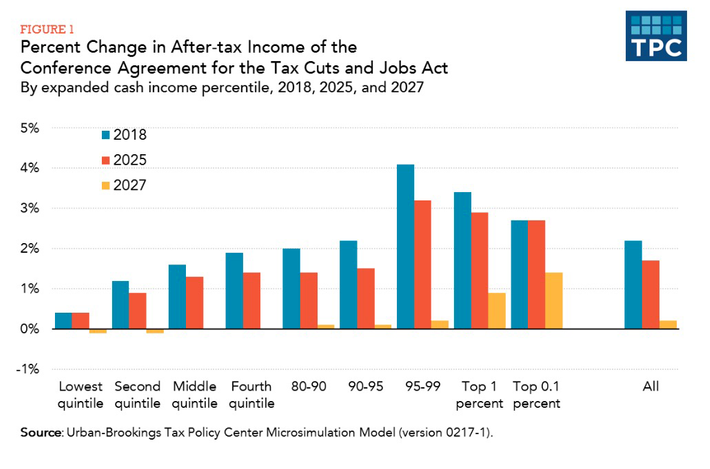 Most Republican lawmakers say that they only phased out the middle-class tax cuts as a budget gimmick: No administration, Democratic or Republican, is going to allow a giant middle-class tax hike to take effect. After all, president Obama could have let George W. Bush’s middle tax cuts expire just by sitting on his thumbs — instead, the prospect of that happening was treated as a fiscal crisis.

And next year, most middle-class Americans really will enjoy a tax cut. The division of these spoils, however, is still regressive. The poorest Americans — who generally pay sales and payroll taxes, but have no federal income liability — will get about $60 each. The middle class would get an average payout of $930, which is equal to about 1.6 percent of the cohort’s average income. Americans in the top 95th to 99th percentile (those earning between $307,900 to $732,800 a year) would see the biggest percentage income increase, with the average household getting $13,480 back. The biggest absolute tax break would go to the top 0.1 percent, which will see an average after-tax gain of $193,380.

Republicans can say that they don’t intend for the 2027 version of their bill to ever take effect. But if we are going to evaluate the tax plan on the basis of the GOP’s stated intentions then we need to assume that the 2018 version of the plan will be maintained indefinitely — with the cost offset by multitrillion-dollar cuts to Medicaid, Medicare, Social Security, food stamps, public schools, the Environmental Protection Agency, and virtually every other public institution that the middle class relies on more than the GOP donor class does.

For some strange reason, ordinary Americans don’t seem to view the GOP kindly, no matter which of these perspectives they chose to take.