I see another one! Photo: Chip Somodevilla/Getty Images

Last week Twitter explained that President Trump will not be kicked off the social-media platform, even if he keeps using it to threaten nuclear war.

Since we’re stuck with Trump’s tweets, we might as well have some fun with them. On Sunday night Trump posted some more fodder for a very frightening, adult version of our favorite pastime from the pediatrician’s waiting room: Highlights magazine’s “What’s Wrong?” feature. Try to spot all the mistakes in the two tweets below, then check out the answer key below! 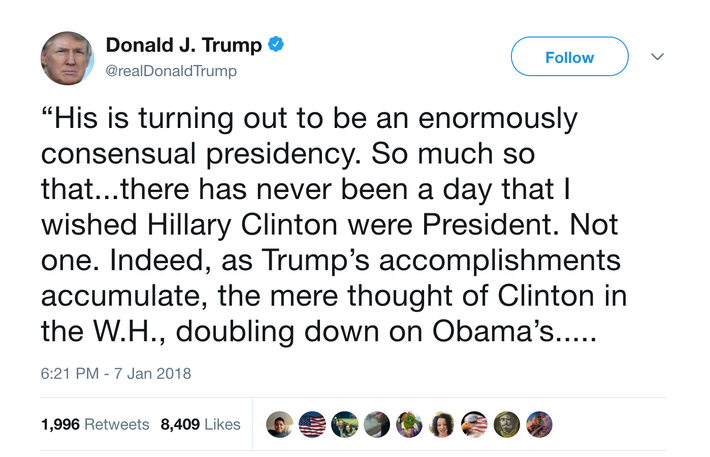 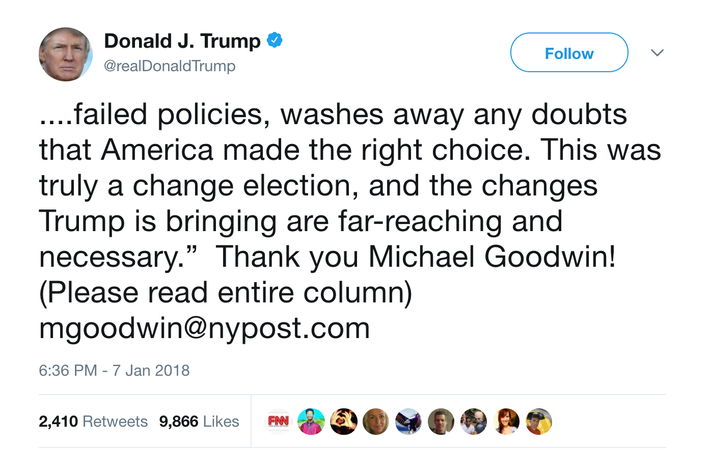 • Trump is quoting a new opinion piece from the New York Post’s Michael Goodwin. Goodwin wrote: “His is turning out to be an enormously consequential presidency.” Nineteen-plus women say Trump has been anything but consensual.

• These tweets were posted in the middle of the Golden Globes, where the theme was standing up against workplace harassment.

• Trump implores his followers to “please read the entire column,” followed by Goodwin’s email address instead of a link.

• The autocorrect error suggests Trump was retyping the lengthy quote instead of using copy/paste. Why? Perhaps because he wanted to omit the part where Goodwin criticized him. Trump cut the bolded section of this line: “So much so that, despite my own frustration over his missteps, there has never been a day when I wished Hillary Clinton were president. Not one.” (But Trump does deserve credit for actually using ellipses.)

• Goodwin’s piece actually isn’t all that flattering to Trump, though the president is said to be friendly with the conservative columnist. Earlier in the column he describes the chaos of the Trump administration, and predicts it will never change:

But what of Trumpism? Is “Fire and Fury,” the Michael Wolff book where Bannon leaks and vents, the beginning of the end of Trump’s presidency?

Maybe — but probably not. After all, every previous media-hair-on-fire moment has come to a forgettable dead end.

This time could be different, but more likely, the latest explosion of gossip and sniping marks just another day on the razor’s edge. This is the essential nature of the Trump presidency, where catastrophe is always a heartbeat away. It will be like that as long as he’s in the Oval Office.

This is who Trump is, and a year into his presidency, there is no reason to believe he will change. A penchant for creating melodrama seems essential to his being.

• These tweets do nothing to contradict recent reports that Trump has limited the time he spends at work so he can focus on his tweeting, possibly while in bed with a cheeseburger.

On the other hand, Trump eventually deleted his original tweets and posted this version, with Goodwin’s criticism and the link.

...Clinton in the WH, doubling down on Barack Obama’s failed policies, washes away any doubts that America made the right choice. This was truly a change election — and the changes Trump is bringing are far-reaching & necessary.” Thank you Michael Goodwin! https://t.co/4fHNcx2Ydg

If you have any other issues with Goodwin’s column, you know where to reach him.