The Democratic Party is long past due for its “come to cannabis” moment.

The fact that Team Blue hasn’t already embraced marijuana legalization as a signature issue is political malpractice. In our hyperpolarized era, there aren’t many policies that energize one party’s base, while also appealing to a majority of the other party’s voters. Legal weed is one.

And yet, Democrats have passed on this potent hybrid of a “wedge” and mobilization issue. Even as 420-friendly, third-party candidates began eating into Hillary Clinton’s advantage among younger voters in 2016, the Democratic nominee “just said no” to federal legalization of marijuana. Coming out in favor of regulating cannabis like alcohol would have put the Clinton campaign into better alignment with millennial opinion; sharpened its message on criminal justice reform; and won it the enthusiastic support of underserved advocacy organizations, all while  undermining the perception of Hillary as an overly cautious politician unwilling to take bold stands on behalf of progressive priorities.

Given the narrowness of Clinton’s losses in Michigan, Pennsylvania, and Wisconsin — and her lackluster performance among voters under 40 (roughly 74 percent of whom support marijuana legalization) — it’s quite possible that America could have been spared the Trump presidency, had Hillary only gotten a bit higher on legal weed.

But America had no such luck. And now, the Justice Department is helmed by a man who sees little distinction between pot brownies and speedballs. On Thursday, Jeff Sessions reversed an Obama-era policy that had enabled states to pursue marijuana legalization without threat of federal interference, so long as they took measures to prevent reefer from getting into the hands of minors or criminal gangs. U.S. Attorneys still have the prosecutorial discretion to leave dispensaries be. But they now have the permission (and encouragement) of the attorney general to disrupt legal weed markets, if they so choose. At present, eight states have legalized the recreational use of cannabis.

Sessions’s decision to turn back the clock on legalization is a terrible policy. Fortunately, it’s also a politically toxic one — and thus, provides Democrats a prime opportunity to take ownership of the weed issue. In October, a Gallup poll found 64 percent of Americans saying that marijuana should be legalized for recreational use — a majority that included 51 percent of Republican voters. 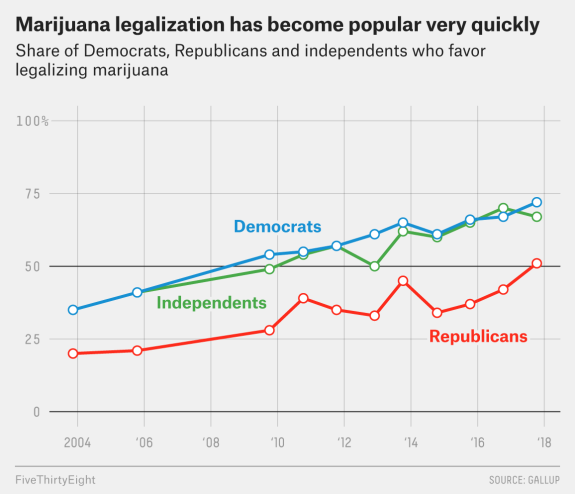 That finding makes weed legalization one of the least polarizing policy ideas in American politics, as FiveThirtyEight’s Harry Enten has noted. 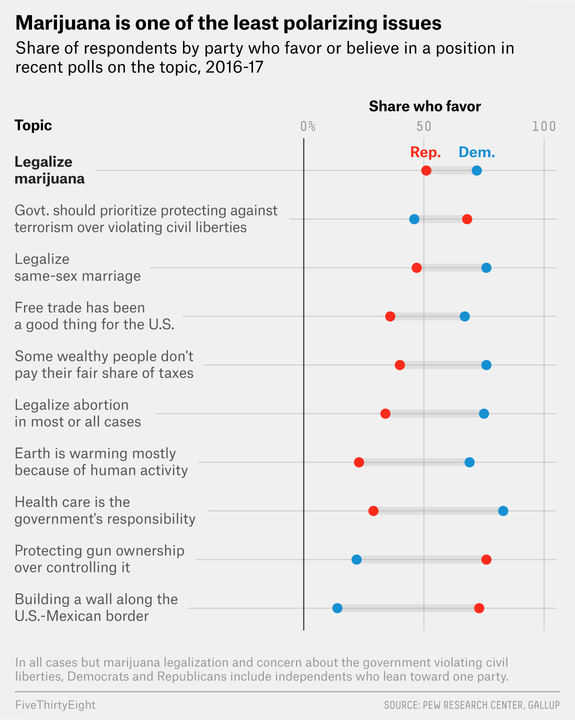 Support for allowing states to legalize the substance at their own discretion is even more overwhelming. Multiple polls have found have found upwards of 70 percent of the electorate believes the federal government should not interfere with state-level decisions about legalization. Meanwhile, a full 83 percent of the public supports legalizing marijuana for medical purposes (more than half of all U.S. states have already done so). And yet, Sessions’s new guidance even threatens this overwhelmingly popular policy: The federal government still designates marijuana as a Schedule 1 substance, the category reserved for drugs with the highest potential for abuse, and no legitimate medical use.

Given the broad popularity of full legalization — and its special appeal among millennials and left-leaning independents — most Democratic 2018 candidates would benefit from embracing the cause. And thanks to Sessions’s overreach, even Democrats running in deeply conservative areas — who may be (understandably) averse to being on the vanguard of the issue — can claim an advantage on weed policy. There may be districts in this country where legal pot doesn’t sell; but you’d be hard-pressed to find any constituency that believes that marijuana is a more dangerous painkiller than Oxycontin.

In fact, there’s reason to think that a “state’s rights and pro-medicinal marijuana” platform could help Democrats in long-shot, rural districts that have been besieged by the opioid epidemic. As policy analyst Sean McElwee notes, a recent Public Policy Polling survey of a Democratic-reach district in Kentucky found 56 percent of voters saying that medical marijuana reduces addiction to pain pills, while only 26 percent saw the substance as a gateway drug. This shouldn’t be too surprising: Red America’s (relatively) mellow attitude toward weed was well demonstrated in the 2016 election, when proposals to liberalize marijuana laws often enjoyed more support than Donald Trump in conservative states. 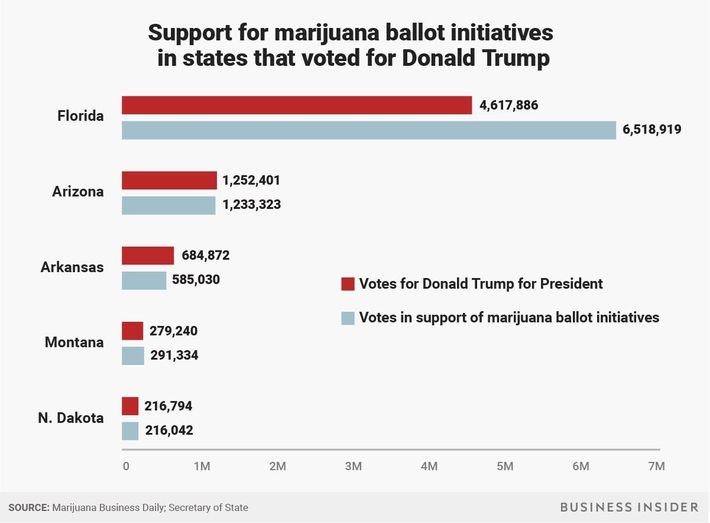 When one considers the scale of the left’s advantage on marijuana policy, it becomes difficult to understand why Democrats have been so shy about campaigning on the issue. Among progressives, it’s popular to blame this reluctance on Big Pharma’s nefarious influence over the Donkey Party. And it’s certainly true that Democrats have shown deference to the pharmaceutical industry’s interests in the past. But the party has also made attacking drug companies — and pledging to coercively reduce drug prices — a cornerstone of its Better Deal agenda. Whether one trusts Democrats to follow through on that pledge or not, it’s demonstrably not the case that the party is unwilling to rhetorically threaten Big Pharma’s bottom line for political gain.

Perhaps, the best explanation for Democrats’ aversion to taking a loud, left turn on marijuana is that many in the party simply oppose legalization on the merits. If so, they are sorely misguided.

It simply does not make public-policy sense to create an unregulated black market for a popular substance that is less addictive, less fatal, and less likely to cause traffic accidents than alcohol. On Thursday, Jeff Sessions called on federal prosecutors to base their enforcement decisions on what would be most likely to “reduce violent crime, stem the tide of the drug crisis, and dismantle criminal gangs.” If those are truly the attorney general’s priorities, then he should support marijuana legalization.

Bringing weed into the legitimate economy would take a major profit source away from violent drug cartels, while generating nearly $30 billion a year in new revenues for federal, state, and local governments. It would also allow American cops to spend less time disrupting the lives of soft-drug users and more time policing violent crime — in 2014, there were 700,993 marijuana arrests, roughly 90 percent of which were attributed solely to possession. Such arrests aren’t merely a waste of law enforcement’s time and resources; they also perpetuate racial bias in America’s criminal justice system. White and black Americans use marijuana at nearly identical rates — but African-Americans are nearly four times more likely to be arrested for possessing the drug. Finally, increasing the availability of marijuana could stem the rising tide of opioid overdoses in the United States: Multiple studies have found that when states expand access to legal marijuana, declines in painkiller abuse and related overdoses follow.

All of which is to say: As a matter of policy and politics, Democrats would have to be high not run on weed in 2018.

THE FEED
19 mins ago
politics
politics
What a Difference 10 Years Makes: The Senate Votes to Protect Same-Sex Marriage
By Nia Prater
The legislation received support from several Republican senators, including Mitt Romney, who once openly opposed same-sex marriage.
5:22 p.m.
games
games
The U.S. Pulled It Off
By Will Leitch
They survived a tense second half and an injury to their best player to beat Iran.
4:31 p.m.
early and often
early and often
Republicans: Leave the World’s Richest Man Alone!
By Margaret Hartmann
Ron DeSantis and Kevin McCarthy want everyone to “stop picking on Elon Musk.” They’ve barely said anything about Trump dining with antisemites.