How did we get here? And how do we get out? Photo: Spencer Platt/Getty Images

Between 1999 and 2013, the death rate for white, middle-aged, working-class Americans increased by 22 percent. This explosion in premature deaths was driven by a surge in opioid overdoses, alcohol-related fatalities, and suicides. Meanwhile, over the same period, medical advances pushed down the death rates of college-educated whites, and the working-class members of other racial groups.

The economists Angus Deaton and Anne Case first brought these disconcerting facts to national attention in 2015. Their research painted a portrait of a white working class besieged by “despair.” Erosion in the demographic’s wages, marriage rates, job quality, social cohesion, cultural capital, and, perhaps, racial privilege, were ostensibly driving an ever-larger number of non-college-educated whites into suicidal behavior. The economists offered no definitive, causal explanation for the phenomenon they documented. But they suggested that the rising mortality of this demographic was linked to a sense of meaninglessness, rooted in social and economic conditions.

In the ensuing years, Donald Trump, and the journalists that covered his campaign, began telling a similar — but less nuanced — story. This tale put overwhelming emphasis on economic explanations for the demographic’s plight. And as the opioid crisis deepened in many white, rural areas, Trump (and some of his interpreters) began painting this “American carnage” as a symptom of economic dispossession.

A new working paper from the National Bureau of Economic Research throws cold water on Trump’s just-so story. Economist Christopher Ruhm collected county-level data on what Case and Deaton dubbed “deaths of despair” — drug overdoses, suicides, and alcohol-induced deaths. He then looked at five measures of economic health in each county: rates of poverty and unemployment, the relative vulnerability of local industries to competition from foreign imports, median household income, and home prices.

The conventional narrative would suggest that the worse the economic conditions are in a given county, the higher its “despair death” rate. But Ruhm found only a weak correlation between economic hardship and the prevalence of such deaths. He concludes that, at most, poor economic conditions can explain only 10 percent of the increase in drug overdose deaths since 1999.

Ruhm’s paper suggests that economic and social conditions have received undue emphasis in the media’s accounts of the opioid crisis, in particular. This isn’t a demand story — not primarily, anyway. Despair may have made certain American communities more vulnerable to the epidemic. Economic and social factors may have contributed to the kindling — but the explosion in the supply of opioids was a flamethrower.

You don’t need to be a despairing, downwardly mobile factory worker to become addicted to OxyContin. It’s an incredibly chemically addictive substance. And when the company that owned the patent to that substance began marketing it as a safe treatment for chronic pain in the 1990s — and doctors began prescribing the pills en masse — a surge in drug abuse and overdoses was sure to follow, regardless of the strength of America’s economy and social fabric.

A glance at cross-country data on opioid consumption buttresses this supply explanation. In the United States, the standard daily dose of prescription opioids for every 1 million people is 50,000, according to United Nations data. No other country is in that vicinity. 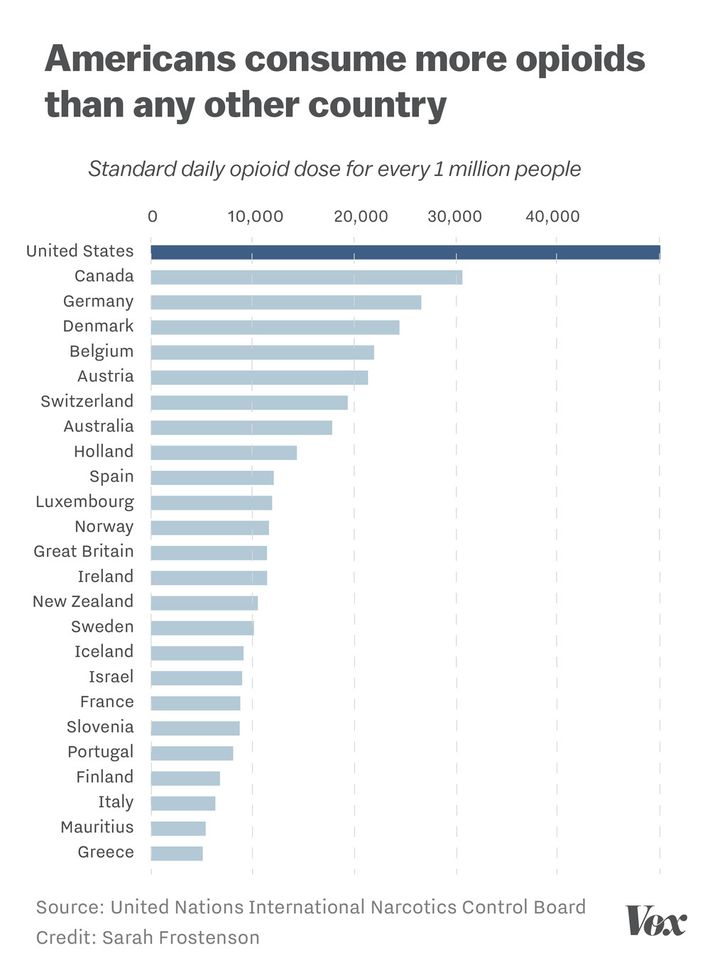 America is not the only nation on this list whose industrial working class has suffered from worsening economic and social conditions in recent decades. The simplest and most compelling explanations for our exceptional rates of opioid use are supply factors — how our government regulates these medicines, and how our doctors prescribe them.

And yet, none of this contradicts Case and Deaton’s core hypothesis: that as a result of various economic and social changes, life has “lost its meaning for a large section of the American population,” and that meaninglessness is contributing to an increase in “deaths of despair.” It is difficult to tell a satisfying supply-side story about the surge in suicides and alcohol-related deaths in the U.S. — or about the steadily rising number of Americans suffering from depression, stress, or anxiety. And it is hard to believe that there is no significant relationship between these developments and our nation’s soaring middle-class debt; tepid wage growth; rising costs of housing, health care and of higher education; and widespread retirement insecurity.

Ruhm’s research both clarifies and complicates our understanding of the opioid epidemic’s causes. But it does little to challenge the consensus understanding of what must be done to address it. We have long known how to drastically reduce the number of opioid overdoses in our country; we just lack the political will required to do so.

The most effective remedy for opioid addiction, bar none, is medication-assisted treatment (MAT). Under MAT, addicts are provided with methadone and buprenorphine — less powerful opioids that satiate most addicts’ cravings, and arrest their withdrawal symptoms, without inducing opioids’ debilitating, euphoric high. Decades of research, the World Health Organization, CDC, and National Institute on Drug Abuse have all demonstrated MAT’s efficacy. Some studies suggest that the treatment reduces mortality among drug addicts by more than 50 percent. And yet, the therapy is only available in about 10 percent of America’s conventional drug-treatment facilities. Our government could allocate the resources to change that.

While recent federal measures have significantly reduced the overprescription of opioids, doctors nonetheless prescribed enough in 2016 to fill a bottle for every American adult. Given the dearth of evidence that opioids are an effective treatment for chronic pain — and the glut of evidence of their dangers — this is a disconcerting statistic. The National Academies of Sciences, Engineering, and Medicine recently called on the Food and Drug Administration to conduct a review of opioids already on the market, and to strengthen its post-approval oversight of such painkillers. The FDA could honor that recommendation.

Finally, there is one sense in which the opioid crisis absolutely is rooted in economic conditions: In the United States, we have structured the health-care sector of our economy in a manner that leaves roughly 40 million Americans without health insurance — and thus, without access to affordable addiction and mental-health services. Our government could join its peers in the developed world in providing its citizens with universal access to health care.

+Comments Leave a Comment
Is the Opioid Crisis Driven by Supply or Demand?