One of the many hells that we’ve created for ourselves online is the personified brand. Faceless corporate entities participating in online culture and co-opting fun jokes in order to sell hamburgers and get you to watch This Is Us.

Last night, NBC’s official account decided to livetweet the Golden Globes, offering running commentary as the ceremony proceeded. One tweet contained a GIF of Oprah Winfrey, the universally beloved celebrity, and the caption “Nothing but respect for OUR future president.” 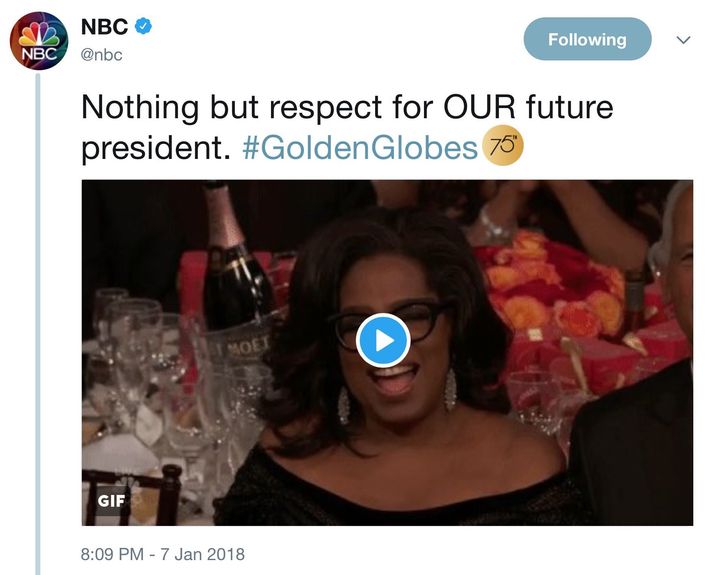 There are two ways of looking at this tweet. Maybe you see the tweet for what it actually is: a reference to a long-running meme in which a girl cleaned off Donald Trump’s Walk of Fame star and captioned her tweet about it with “Nothing but respect for MY president.” The post was quickly and widely parodied.

It’s also a reference to a joke Seth Meyer made during the program last night.

Seth Meyers: "In 2011, I told some jokes about our current president at the WHCD... I just want to say: Oprah, you will never be president. You do not have what it takes. And Hanks. Where's Hanks? You will never be vice president." #GoldenGlobes pic.twitter.com/vQzxrHZfrt

Alternatively, it’s possible that the brain worms have eaten large holes in your frontal lobe and you see NBC’s tweet as some coded anti-Trump message. It would, after all, be absurd to suggest that a billionaire celebrity with no political experience could make it to the Oval Office.

All of this dumb backlash led NBC to get rolled by ridiculous right-wing outrage (maybe they missed the memo that online outrage doesn’t really matter). The company deleted the tweet, blaming a third-party vendor that was running its account during the ceremony.

Yesterday a tweet about the Golden Globes and Oprah Winfrey was sent by a third party agency for NBC Entertainment in real time during the broadcast. It is in reference to a joke made during the monologue and not meant to be a political statement. We have since removed the tweet.

Anyway, that’s one of many dumb controversies today. It’s only Monday.

THE FEED
8 mins ago
hurricane ian
hurricane ian
Hurricane Ian Verges on Category 5 As It Makes Landfall in Florida
By Intelligencer Staff
With 155-mph winds and ten-foot storm surges, the massive storm barrels into densely populated southwest Florida.
8 mins ago
games
games
Brett Favre Was Always Pretty Awful
By Will Leitch
Thanks to his legion of defenders, the ex-QB thought he could get away with anything. An egregious scandal in Mississippi shows there are limits.
9:59 a.m.
russia
russia
It Sure Looks Like Someone Blew Up a Gas Pipeline Connecting Europe to Russia
By Kevin T. Dugan
Everything we know about a massive leak in the middle of the Baltic Sea.

9:00 a.m.
tremendous content
tremendous content
The Fetterman Campaign Should Just Hire Dr. Oz
By Margaret Hartmann
Oz created a new slogan for his opponent, saying his hoodies show that “he’s kicking authority in the balls.”
8:00 a.m.
crime
crime
Inside the Ransomware Gangs That Extort Hospitals
By Renee Dudley and Daniel Golden
They shut down patient care and put lives at risk. Would the pandemic finally slow them down?
9/27/2022
early and often
early and often
Will Any Republicans Jump Into Trump’s 2024 Snake Pit?
By Ed Kilgore
A lot of Republicans might be tempted to take on a weakened Trump in the primaries, but they’ll remember how he treated his 2016 rivals.
9/27/2022
the city politic
the city politic
The Growing Cover-up of Rikers Island Deaths
By Matt Stieb
The head of the city’s jails told aides to keep a dying man off his “department’s count,” according to the New York Times.
9/27/2022
just asking questions
just asking questions
Is the Fed’s Cure for Inflation Worse Than the Disease?
By Benjamin Hart
Economic analyst Ryan Sweet on the tricky balance Jerome Powell is trying to strike and how Europe’s woes could spread to America.
9/27/2022
early and often
early and often
‘It Was All a Hoax’: Migrant Sent to Martha’s Vineyard by DeSantis Speaks
By Paula Aceves
A Venezuelan migrant on his mysterious, terrifying journey to Martha’s Vineyard as a political prop of Ron DeSantis.
9/27/2022
hurricane season
hurricane season
Tampa Could Be a Bull’s-eye for Hurricane Ian
By Matt Stieb
The quickly intensifying hurricane could bring storm surges of up to ten feet to the low-lying Tampa metro.
9/27/2022
early and often
early and often
If You Really Love Democracy, You Can’t Love the U.S. Senate
By Ed Kilgore
Mitch McConnell and Kyrsten Sinema are big on respecting the Senate as an institution, but valuing democracy means working to minimize its impact.
9/27/2022
at home in asian america
at home in asian america
For Domestic Workers, the Asian Class Divide Begins at Home
As told to Arya Sundaram
Five nannies from the Philippines, Nepal, and China open up about what it’s like to work for their Asian American employers.
9/26/2022
space
space
NASA Just Hit an Asteroid to See If It Could
By Chas Danner
Take that, floating rock.
9/26/2022
early and often
early and often
McConnell Seeks Revenge on Manchin for Inflation Reduction Act
By Ed Kilgore
Sheer spite, not energy policy, is motivating a Republican effort to kill Manchin’s energy-permitting bill.
9/26/2022
tremendous content
tremendous content
Even Donald Trump’s Family Barely Uses Truth Social
By Margaret Hartmann
Trump should blame himself for the social-media site’s legal and financial woes. But if he’d rather find a scapegoat he doesn’t need to look far.
9/26/2022
the money game
the money game
Monday Was Just Another Horrible Day for Markets
By Kevin T. Dugan
There are so many things going wrong that it’s hard to keep track.
9/26/2022
early and often
early and often
Edward Snowden Is Now a Russian Citizen
By Matt Stieb
The whistleblower’s lawyer claims he will not be eligible to fight in Ukraine.
9/26/2022
early and often
early and often
Unraveling Trump’s Bogus Election-Denial Arguments
By Ed Kilgore
Sixty percent of Americans have an election-denier on the ballot this year. Here’s what they believe specifically and what that means for democracy.
9/26/2022
screen time
screen time
TikTok Is the New King of Social Media. Now What?
By John Herrman
The video-sharing service faces perils old and new.
9/26/2022
at home in asian america
at home in asian america
Asian America Learns How to Hit Back
By Esther Wang
The desperate, confused, righteous campaign to stop Asian hate.
9/26/2022
on with kara swisher
on with kara swisher
Chris Cuomo Wants to Move Forward. Can He?
By Intelligencer Staff
Kara Swisher has a long, frank talk with the former CNN anchor about the scandals that got him fired, his brother, and if his comeback will pan out.
9/24/2022
exhibit a
exhibit a
It’s Blindingly Clear the Feds Failed to Investigate Trump’s Finances
By Ankush Khardori
Letitia James’s fraud lawsuit is also an indictment of the Justice Department.
9/23/2022
2022 midterms
2022 midterms
House Republicans Release Their Vague ‘Agenda’ for 2023
By Ed Kilgore
There’s nothing about climate change, Russia, or extremist threats to democracy, and their abortion stance is very hard to find.
9/23/2022
the money game
the money game
Why the Global Economy Just Cracked Up
By Kevin T. Dugan
A recession is all but certain.
9/23/2022
tremendous content
tremendous content
Mehmet Oz: Buying a House for $1 Is Shameful (Unless My Family Does It)
By Margaret Hartmann
The Republican Senate candidate picked the wrong detail to use against his opponent, John Fetterman.