Ever since the beginning of time, man has yearned to destroy the sun. I shall do the next best thing. Photo: Jabin Botsford/The Washington Post/Getty Images

Monday night, the Trump administration announced that it was imposing a new 30 percent tax on imported solar panels. The tariffs strike a blow at two of Trump’s favorite targets: foreign trade (especially by China) and clean energy.

Analysts expect that the tariffs will create negligible American jobs in solar-panel manufacturing. Turning the clock back on solar adoption by about two years is not going to do much to save coal or prevent the continued spread of clean energy. Like many of his attacks on the Obama legacy, he is throwing sand in the gears of operations that he cannot stop.

It’s also worth noting that clean energy is really, really popular. People may not like carbon taxes, but they definitely like the idea of supporting new renewable energy: 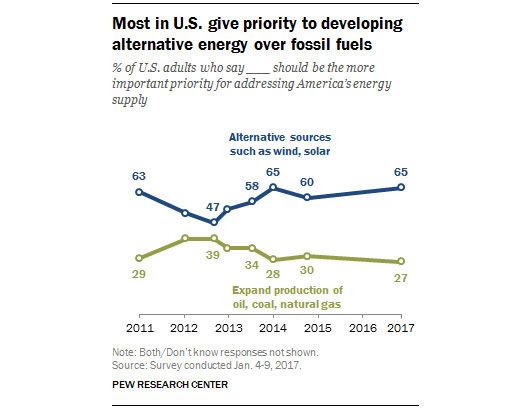 That’s why John McCain in 2008 and Mitt Romney in 2012 both gave at least lip service to the idea of supporting more renewable energy, and Trump claimed to harbor an abiding affection for solar energy. (“I know a lot about solar. I love solar.”) He was not promising to tax solar energy. That’s another unpopular action he’ll have to defend in 2020.