Alger Hiss is the martyred hero who inspired generations of progressives. A suave, articulate, Harvard-educated diplomat, Hiss was convicted in 1950 of perjury in a case related to his alleged espionage for the Soviet Union, and he remained a cherished symbol of the victims of McCarthyism. Decades later, testimonials to Hiss’s innocence have never stopped pouring forth.

The Republican Party appears to have been searching for an Alger Hiss of its own. It has settled on Carter Page. While neither suave nor articulate — indeed at times barely coherent — Page possesses the crucial virtue of having been the subject of a long-standing FBI counterintelligence investigation. This makes Page the best available symbol of the brutal investigatory excesses of the deep state.

The right-wing legal community has rallied around Page, from National Review’s Andrew McCarthy to party legal apparatchiks David Rivkin and Lee Casey in their Wall Street Journal op-ed perch. Page “is completely innocent. There is no evidence to suggest that anything that is claimed in the dossier is true,” asserts Fox News legal analyst Gregg Jarrett.

It is true that Page has not yet been charged with any crimes, and it is possible he never will be. Still, he has done very little to reward the confidence conservatives have placed in him. Sean Hannity, one of Page’s most spirited defenders, recently asked him about the charges he has faced, “What factual inaccuracies stand out to you?” Page’s entire reply was, “It’s just the complete ridiculousness of it all, Sean, so …” and then he trailed off, forcing Hannity to come up with another question. Page then told Hannity, “You have been the Edward R. Murrow of this whole process,” seeming to epitomize the right’s sense that the investigation into Trump’s links with Russia is a modern form of McCarthyism.

Nor does Page’s background recommend him as a promising candidate for martyrdom. In 2013, he met with Russian spies, who (in comments later picked up by FBI surveillance) assessed him as greedy for oil money, but also possibly too much of an “idiot” to be as useful as they hoped. Page traveled to Russia frequently and conducted business with Russian energy firms tied to Vladimir Putin. In 2016, he somehow glommed onto the Trump campaign as an adviser — Trump named him, though the two reportedly never met. That summer, he visited Moscow and delivered a bizarrely pro-Russian speech, including such lines as, “Washington and other Western capitals have impeded potential progress through their often hypocritical focus on ideas such as democratization, inequality, corruption, and regime change.”

Between these episodes, the narrative has a lot of blanks. British investigator Christopher Steele compiled reports filling in those blanks with massively incriminating details. Page, wrote Steele, met in 2016 with two different Russian officials to discuss lifting of sanctions against Russia, bilateral energy cooperation and, most intriguingly, Russia’s interest in passing harmful information about Hillary Clinton to the Trump campaign. Page denies all these charges.

Republicans have used the dossier to try to discredit the Russia investigation writ large. This is what has made Page their cause célèbre. A widely hyped memo by Devin Nunes claimed the FBI had used the dossier as the primary basis to investigate Page, and failed to notify courts that its author was working for rival candidates. It turns out neither of these allegations is true. A Democratic memo shows that the FBI’s investigation of Page long predates the dossier, and it did disclose Steele’s political role.

In the wake of the destruction, little remains of the Republican argument except fulminations against the FBI for its unfair treatment of poor Carter Page. Yes, he met with Russian agents, went into business with state-controlled Russian entities, and publicly mouthed the Russian foreign policy line. But nothing else has been proven! “There is no evidence to suggest that anything that is claimed in the dossier is true,” insists Jarrett.

Well, the Democratic memo refers to a great deal of evidence the FBI had to open and then repeatedly renew its counterintelligence investigation. Most of that detail has been redacted, since it would compromise intelligence-gathering methods and sources. The Democratic memo asserts the FBI gathered a great deal of evidence to corroborate the picture drawn by Steele, but that evidence is broad patches of black: 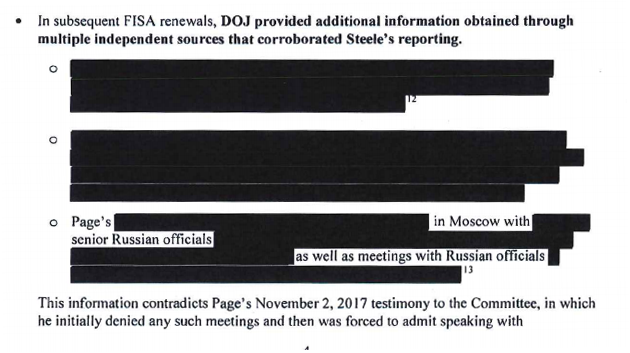 What lies beneath that black ink? We don’t know. If I had to bet, I would wager it does not make Page look good. Page’s explanation is that there’s nothing shady, and that he is the victim of anti-Catholic discrimination by the Clinton campaign. “I am a lifelong practicing Roman Catholic who attended Catholic schools for 14 years, culminating with my Master of Arts in National Security Studies from Georgetown University in 1994,” Carter wrote last month. “The clear evidence of intolerance against Catholics shown by the ‘Hillary for America’ campaign and the fact that several of her closest advisors knew of my religion helps to make part of the reason for her attacks more obvious.” Therefore, according to Page, his treatment “may be among the most extreme examples of human rights violations observed during any election in US history since Dr. Martin Luther King, Jr. was similarly targeted for his anti-war views in the 1960s.”

My guess is that Steele’s account of Page’s behavior — which does not posit ﻿a conspiracy to persecute innocent Catholic foreign policy analysts, and places more weight on Page operating from simple greed — is closer to the mark. Republicans are betting the opposite.

One historical footnote worth considering is that Alger Hiss’s guilt as a Russian spy was eventually established beyond any reasonable doubt. Over the years, the ranks of his defenders dwindled to a hardened left-wing core. Maybe the future of Carter Page is to have a long career as a cartoonish right-wing, second-time-as-farce Alger Hiss.

THE FEED
11:07 a.m.
what we know
what we know
Death Toll Climbs in Turkey and Syria After Earthquakes: Updates
By Chas Danner
Thousands are dead in Turkey and Syria, where search and rescue operations and powerful aftershocks continue.
10:12 a.m.
the talented mr. santos
the talented mr. santos
Here’s Every Single Lie Told by George Santos
By Matt Stieb
Navigating the many exaggerations and falsehoods of New York’s newest representative.
10:00 a.m.
the national interest
the national interest
Michael Lind, Case Study in the Perils of Discourse-Poisoning
By Jonathan Chait
How an intellectual talks himself into believing the GOP is the left-wing party.

9:03 a.m.
what we know
what we know
Did China’s Alleged Spy Balloon Mission Backfire? Updates
By Chas Danner
It’s possible the whole saga will end up being a U.S. intelligence win.
9:00 a.m.
just asking questions
just asking questions
Should a 13-Year-Old Have Bariatric Surgery?
By Benjamin Hart
Sandra Hassink on what the new pediatric obesity guidelines she co-wrote do and don’t say.
8:00 a.m.
the economy
the economy
America’s Labor Shortages Are Good, Actually
By Eric Levitz
The upside of longer lines and faltering customer service.
2/5/2023
early and often
early and often
Has Pete Buttigieg’s Dream Job Turned Into a Nightmare?
By Ed Kilgore
It turns out Transportation secretary won’t be a quick and easy layover on the way to higher office for Mayor Pete.
2/4/2023
early and often
early and often
The Democrat Who Could Take Down Kyrsten Sinema
By Ben Jacobs
Ruben Gallego will try to fulfill the left’s dreams by challenging Arizona’s newly independent U.S. senator.
2/3/2023
early and often
early and often
House Republicans’ Assault-Weapon Pins Aren’t Just a Taunt
By Ed Kilgore
Owning the libs may be an added bonus, but Second Amendment absolutists clearly intend them as a threat against those who challenge gun rights.
2/3/2023
creature capers
creature capers
The Hunt Is on to Find the Dallas Zoo Bandit
By Matt Stieb
A suspect was arrested after police received a tip that the alleged bandit was visiting the aquarium.
2/3/2023
just asking questions
just asking questions
What Could a Chinese Spy Balloon Over the U.S. Do, Exactly?
By Matt Stieb
Arms-control expert Jeffrey Lewis examines whether the Chinese spy ship over the West is an accident or a geopolitical middle finger.
2/3/2023
poll position
poll position
Trump’s Lead in 2024 Polls May Be Thinner Than We Thought
By Ed Kilgore
The ex-president looks weaker against Ron DeSantis and other likely Republican rivals in the polls that were most reliable last year.
2/3/2023
tremendous content
tremendous content
Trump Knows How to End Ukraine War ‘Immediately,’ But It’s a Secret
By Margaret Hartmann
Trump revealed there’s something he could say that would “guarantee” that the fighting ends now. Sadly, he won’t tell unless we reelect him.
2/3/2023
horrible bosses
horrible bosses
Working for George Santos Is As Crazy As It Sounds
By Matt Stieb
A former aide recorded his conversation with the congressman as he was getting fired. Santos wasn’t all that nice about it.
2/3/2023
crime
crime
New Jersey Councilwoman Shot and Killed Outside Her Home
By Nia Prater
Eunice Dwumfour, a 30-year-old member of the Sayreville Borough Council, was found shot dead on Wednesday night.
2/3/2023
the economy
the economy
The Fed Can Stop Choking the Economy Now
By Eric Levitz
The statistical and moral case for easing up on the interest-rate hikes.
2/3/2023
2024 presidential election
2024 presidential election
What on Earth Are These 2024 Long Shots Thinking?
By Ed Kilgore
It’s not inconceivable that someone like Nikki Haley could become a contender. But don’t count out sheer ego as motivation.
2/3/2023
just asking questions
just asking questions
What It Takes to Give Abortion Seekers (Actually Good) Advice Online
By Irin Carmon
The Online Abortion Resource Squad’s Ariella Messing on fighting disinformation in a post-Roe world.
2/2/2023
early and often
early and often
Trump Reminds Republicans He’s Willing to Ditch the GOP
By Ed Kilgore
Even if he doesn’t formally launch a third-party bid, Trump could doom the 2024 Republican presidential nominee.
2/2/2023
royals
royals
Australia Banishes King Charles From Its Banknotes
By Margaret Hartmann
In the battle to succeed his mother on Australian $5 bills, Charles loses to the First Australians.
2/2/2023
early and often
early and often
The Hunter Biden Counteroffensive Begins
By Matt Stieb
Tired of being a GOP punching bag, he threatened Fox News with a defamation suit and encouraged the DOJ to investigate how his laptop became public.
2/2/2023
the national interest
the national interest
The GOP Attack on Ilhan Omar Trivializes Antisemitism
By Jonathan Chait
Elevating Marjorie Taylor Greene exposes the hypocrisy.
2/2/2023
religion
religion
Badass Pope Briefly Endorses Giving People the Finger
By Benjamin Hart
A weird Thursday-morning tweet from the pontiff.
2/2/2023
early and often
early and often
The Latest Hunter Biden Revelation Is a New Low
By Matt Stieb
Texts reportedly show he withheld an employee’s pay for sex.
2/2/2023
what we know
what we know
New FBI Search of Biden’s Home Finds No Classified Documents
By Margaret Hartmann
The search of Biden’s Rehoboth, Delaware beach house was planned and consensual, like the searches of his office and Wilmington residence.