Demonstrators hold up an African-American Flag during a protest of the killing of teenager Michael Brown on August 12, 2014, in Ferguson, Missouri. Photo: Scott Olson/Getty Images

Faced with the task of refuting Trump’s State of the Union, the Democratic Party chose Joe Kennedy III, a young politician who Democrats hoped would represent a fresh face. But in many ways, Kennedy represents the opposite of where young voters are: He’s a white man in an increasingly diverse generation and he opposes marijuana legalization while young folks are increasingly concerned about mass incarceration and racial justice.

We find evidence that there’s one area where young voters will most dramatically reshape politics: racial justice. Young Democrats who were initially wooed by the idea of a post-racial America have likely been strongly influenced by backlash to Donald Trump’s race-related rhetoric and the rise of movements like Black Lives Matter and the Dreamers within the past decade. These voters will hold Democrats accountable on issues of racial justice, but are Democrats ready to respond?

During her presidential campaign, Clinton faced pressure from young racial-justice organizations such as the Movement for Black Lives and Dreamers. These critiques centered on her comments about “super predators” and her role in the first Clinton administration, which pushed forward a brutal anti-immigration law and escalated mass incarceration. Though she ran a campaign that openly discussed concepts like intersectionality and structural racism, she struggled to mobilize young voters, particularly voters of color, a failure that was enough to cost her the election.

This represents a dramatic shift in the way Democrats approach racial justice, exemplified by politicians increasingly discuss police brutality, immigration, and white nationalism. One candidate in Texas has openly referred to mass deportation as “like ethnic cleansing.” Another candidate in Indiana’s ninth district, which Trump won by 27 points, referred to ending Temporary Protected Status for Salvadoran immigrants as “an act of incredible cruelty done for no other reason than to appease the lowest common denominator: Trump’s white nationalist base.” Needless to say, this is a far cry from the way Democrat politicians talked about immigration just a few years ago.
Data from Pew suggests Democratic members of the public have moved dramatically to the left on issues of race: the share of Democrats who say racism is a “big problem” jumped from 58 percent in 2015 to 76 percent in 2017. In 2017, 64 percent of Democrats said that discrimination is the reason black people can’t get ahead, up from 28 percent in 2010.

To study these trends, we use data from Voter Study Group, a panel survey that interviewed the same 8,000 Americans in 2011, 2012, and 2016 and asks a battery of questions that measure racial resentment. In 2011, Democrats agreed that generations of slavery and discrimination have made it difficult for black people to experience upward mobility by a net 15 points (i.e., 15 percent more Democrats agreed than disagreed with that statement). In 2016, that more than doubled to 38 points. Most importantly, we find that this trend is driven by young voters changing their minds. To capture this effect, we restricted our survey responses to only those who identified as Democrats in 2011 and 2016, and divided them into three groups by their age in 2011 — whether 17 t0 29 years old , 30 to 54 years old, and 55 years old or greater. We then calculated the change in racial resentment and examine movement from 2011 to 2016. 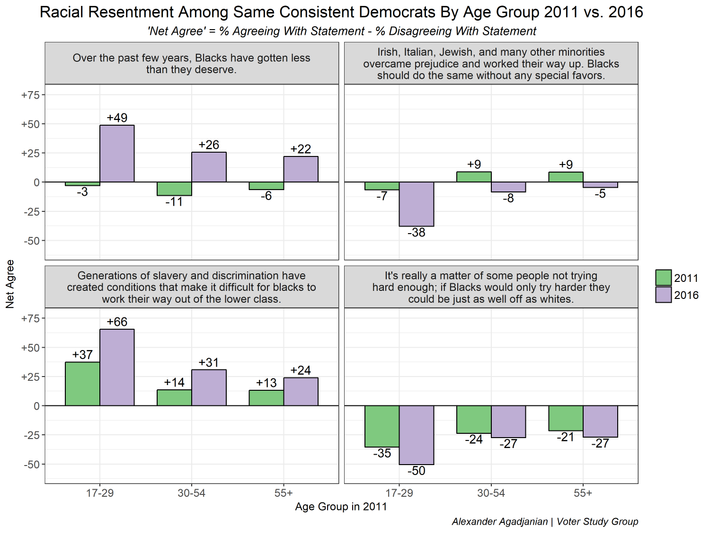 Here it becomes clear that the 17-to-29-year-old cohort of Democrats is growing much more racially liberal than their older counterparts over time. Take the question that asks people if they agree or disagree that “blacks could be just as well off as whites if they only tried harder.” 30-to-54-year-old Democrats were three net points more likely to say they disagreed with that statement — the more racially liberal stance. Democrats 55 and older also grew slightly more racially liberal by six points. But among 17 to 29 year olds, the growth was 15 points in the liberal direction. A similar pattern emerges for the responses to the other questions. On the issue of whether blacks have gotten less than they deserve, the youth grew much more racially liberal (a stunning 52 points more liberal) than 30 to 54 year olds (37 points) and 55-plus year olds (28 points). When we account for race, gender, and education in a regression model, our findings hold: Those most likely to shift toward a liberal racial position over time are Democrat youth. It’s possible that this shift is a short-term response to Donald Trump, but even if there is some slight backsliding, it’s unlikely the trend would entirely reverse. It’s unlikely this is due to survey attrition, because we compare only individuals for whom we have a 2012 and 2016 response.

We can’t pinpoint an exact cause for this shift, but we can offer a few explanations that are consistent with our findings. First, the first signs of these shifts coincided with the rise of Black Lives Matter and the Dreamer movement. Recent research on the Civil Rights Movement suggests that the movement meaningfully shifted white racial attitudes in a more liberal direction. In addition, these movements work to build racial solidarity among black, Latino, and Asian-American Democrats, leading them to become more racially liberal. Second, young people might have been particularly influenced by the presidency of Barack Obama and subsequent rise of Trump, especially given evidence that presidential evaluations strongly shape people’s political views when they are young. It’s very plausible both of these developments engendered greater compassion for African-Americans and awareness of racial inequalities, especially among the youth. But whatever the cause, the effect is the same: politics will never be the same.

+Comments Leave a Comment
Democrats Are Changing Their Minds About Race

THE FEED
23 mins ago
intelligencer chats
intelligencer chats
What Has Made the January 6 Hearings Such Great Television?
By Jen Chaney and Benjamin Hart
TV writers would kill for some of this dialogue, for one thing.
9:00 a.m.
the money game
the money game
Mike Novogratz on His Big Crypto Mistake and What’s Ahead for Bitcoin
By Jen Wieczner
“This has been a complete and total old-school ass-beating.”
7:00 a.m.
life after roe
life after roe
Could New Abortion Bans Lose in Court?
By Jay Michaelson
It won’t be easy, but there are ways to limit the impact of Dobbs.