This afternoon, as part of his probe into Russian interference in the 2016 election, Special Counsel Robert Mueller indicted a number of Russian individuals and organizations — including the infamous Internet Research Agency, a Kremlin-linked “troll farm” known for its social-media campaigns. The indictment contains allegations confirming what most of us already know — that the IRA was engaged in “information warfare” to “sow discord” during the 2016 election through its use of social-media accounts falsely claiming to be ordinary Americans. “The conspiracy had as its object impairing, obstructing, and defeating the lawful governmental functions of the United States by dishonest means in order to enable the Defendants to interfere with U.S. political and electoral processes,” the indictment states.

IRA employees, known as “specialists,” were directed to create social-media accounts and “were divided into day-shift and night-shift hours and instructed to make posts in accordance with the appropriate U.S. time zone,” as well as making comments related to American holidays. They also created social-media pages surrounding divisive issues, with names like “Secured Borders,” “Blacktivist,” “United Muslims of America,” and “Heart of Texas.” The indictment says that many of the pages had follower counts in the hundreds of thousands. It also confirms that the IRA ran the @TEN_GOP Twitter account, which its counterpart, the real Tennessee GOP Party, spent months trying to get shut down.

While the objective of “sowing discord” is floaty and inexact, the political aims of the online work was clear: Throughout the 2016 campaign, the IRA’s workers were ordered to “use any opportunity to criticize Hillary and the rest (except Sanders and Trump — we support them).” IRA employees who ran the “Secured Borders” page were criticized for not having enough posts criticizing Clinton. They purchased ads on social media to that end. 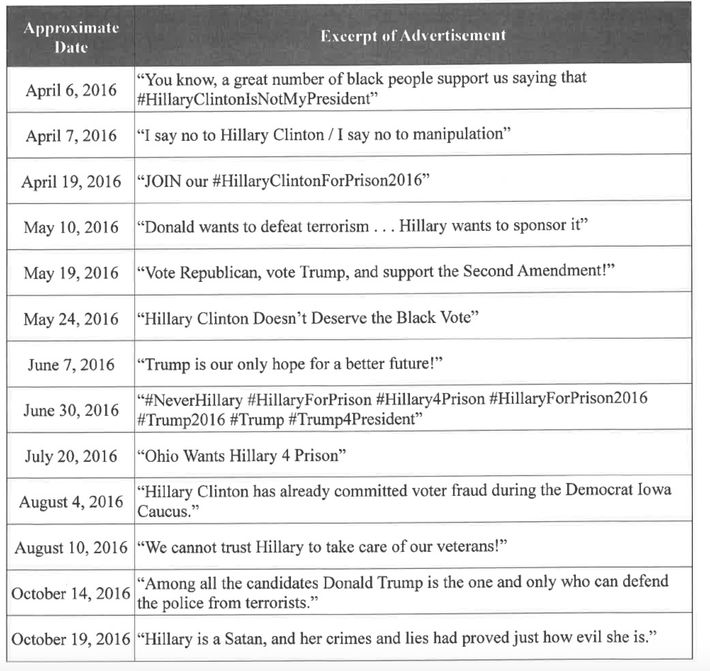 The Russians also tried to suppress minority turnout in the campaign. Pages that appeared to support social-justice issues encouraged users to not vote at all or vote for a third-party candidate, and highlighted Clinton’s hawkishness.

Some of the Russian effort manifested in real-world meetups organized by deceiving real Americans into participating, or paying them to do things like dress up as Hillary Clinton in a prison uniform (“she wants to continue the war on Muslims in the middle east”).

By the time Trump had claimed the nomination, the IRA had turned to building him up and tearing Clinton down. In June of 2016, the indictment states, the @march_for_trump account contacted a volunteer for the Trump campaign in New York, and the volunteer agreed to provide signs for a rally that the IRA-run account was organizing. It’s interactions like these that are central to Mueller’s investigation — how an American campaign interacted with foreign agents, wittingly or unwittingly.