A conveyor belt sits below excavated land at the Garzweiler open cast lignite mine. Photo: Krisztian Bocsi/Bloomberg via Getty Images

Due to a combination of prudence and morbid curiosity, a great deal of scholarly research (and journalism) about climate change has focused on the worst of all possible worlds. For scientists running climate-economic models, that nightmare scenario has a concrete definition: In 2011, such researchers established four baseline scenarios for the future of greenhouse gas emissions (ranging from the benign to the catastrophic) for the sake of facilitating comparable studies.

The most fearsome — and widely cited — of these baselines, known as “RCP8.5,” imagined a year 2100 in which an overpopulated, technologically underdeveloped humanity is digging up and burning every last piece of coal it can find. Thus, by the turn of the next century, coal — the most carbon-intensive major fuel source — would account for 94 percent of the world’s energy supply. In 2015, that figure was 28 percent.

This scenario, and other, less severe hypotheticals that also imagine a resurgence of coal use, have loomed large in both the academic and political debates over climate change. In its most recent report, the Intergovernmental Panel on Climate Change cited 210 scenarios that assumed humanity would move toward more carbon-intensive forms of energy in the coming decades.

But a new analysis from researchers at the University of British Columbia suggests that this assumption — and the nightmare scenarios that derive from it — merits less attention than it’s been given.

Their reasoning is simple. First and foremost, there probably isn’t enough extractable coal on the planet to make RCP8.5 possible, even if future humans tried to use that filthiest of fossil fuels for virtually all of their energy needs. Second, there’s little basis for thinking that we will become more reliant on carbon-intensive energy sources in the future. For decades, the ratio of greenhouse gas emissions to energy produced (i.e., the carbon intensity of energy) has been going down. And the growing prevalence of natural gas and renewable fuels strongly suggests this trend will continue. 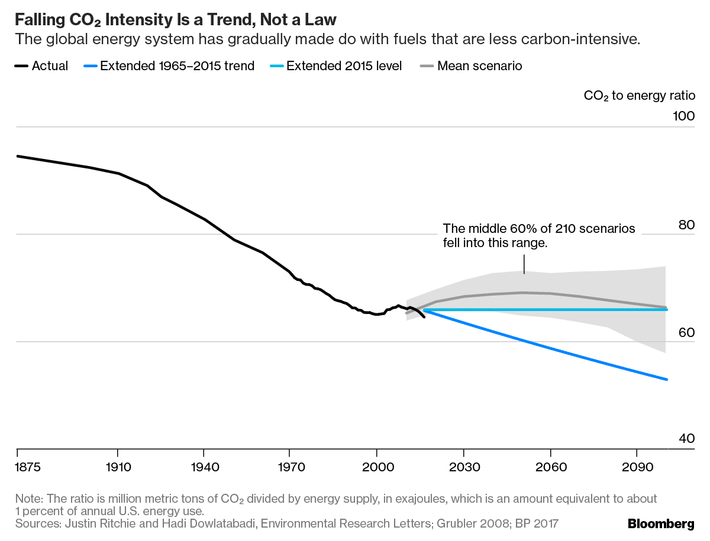 The nightmare scenario looked considerably more plausible just a few years ago, when China’s consumption of coal was steadily rising. But precisely because that fuel is so dirty, anti-pollution political sentiment has pushed the Chinese government to move aggressively toward renewables, and many experts believe the nation’s coal consumption has already peaked.

There’s still no guarantee that we’ll be spared the worst of all possible climates. Even without a coal resurgence, there are plenty of other forces that could upend encouraging trends, including feedback from the warming we’ve already built in — like, for example, a surge of methane emissions from melting permafrost. Furthermore, there remains a lot that we don’t know about how the climate will evolve. One recent study found that aerosols, tiny atmospheric particles found in air pollution, may be suppressing global temperatures by as much a 1.1 degrees Celsius. If true, this would mean that reductions in greenhouse gas emissions would have a less significant effect on global temperatures than previously thought, as they would produce a concomitant decrease in the atmosphere aerosol content.

Nonetheless, there is some reason to think we’ve been overestimating the likelihood of total catastrophe. Which isn’t to say that humanity doesn’t need to radically ramp up its efforts to combat climate change. In fact, this new research suggests that international efforts aren’t aggressive enough: If the baseline trend points toward a greater degree of “passive decarbonization” — reductions in greenhouse emissions through the evolution of energy markets — then governments have been overestimating the economic costs of setting even more stringent caps on carbon emissions.

And make no mistake: Even if near-term planetary extinction looks unlikely, humanity still has a moral and practical obligation to cut emissions as quickly as possible. The worst-case scenario may be less likely than we thought. But very, very bad scenarios remain almost certain. Climate change is already devastating and destabilizing whole regions of the Earth and increasing the intensity and frequency of extreme weather.

+Comments Leave a Comment
Study: Climate Change Probably Won’t Kill All of Us