Donald Trump promised to “streamline the government for the 21st Century” — to slash bureaucratic bloat, and run what remains of the Executive branch with all the ruthless efficiency of a business (or, a business that isn’t run by Donald Trump). From one angle, his administration has pursued this objective aggressively. Even as the White House has expanded America’s involvement in a wide array of foreign conflicts, it has insisted that the State Department lay off 8 percent of its employees, and cut staff at nearly every other major Cabinet agency.

Congressional Republicans, for their part, are so fanatically opposed to government “waste,” they’ve proposed massive cuts to the federal bureaucracy, while imploring certain agencies to eliminate fraud and abuse in public programs. Last year, the GOP called on the IRS to crack down on low-income people who claim a larger earned-income tax credit than they technically qualify for. The amount of revenue lost to such claims is trivial — but the Republican Party is too dogged in its commitment to fiscal probity to let it slide.

And yet, the president pushed through an $80 billion increase in military spending last year; and, right now, congressional Republicans are warning that failure to immediately pass a new budget — that increases spending on Defense further still — would “inflict damage on the military” and threaten national security.

Now, there’s nothing odd about the GOP privileging military spending over other kinds of public investment; the supreme importance of a strong national defense is a core part of its ideology. But if Republicans are remotely sincere in their opposition to bureaucratic waste, their unflinching support for constantly increasing the Pentagon’s budget is difficult to comprehend. After all, as Noam Chomsky has documented, the Pentagon was spending upwards of $125 billion on “administrative waste” as of 2015.

Whoops. Did I just type Noam Chomsky? I meant “the Pentagon’s own internal analysis.” 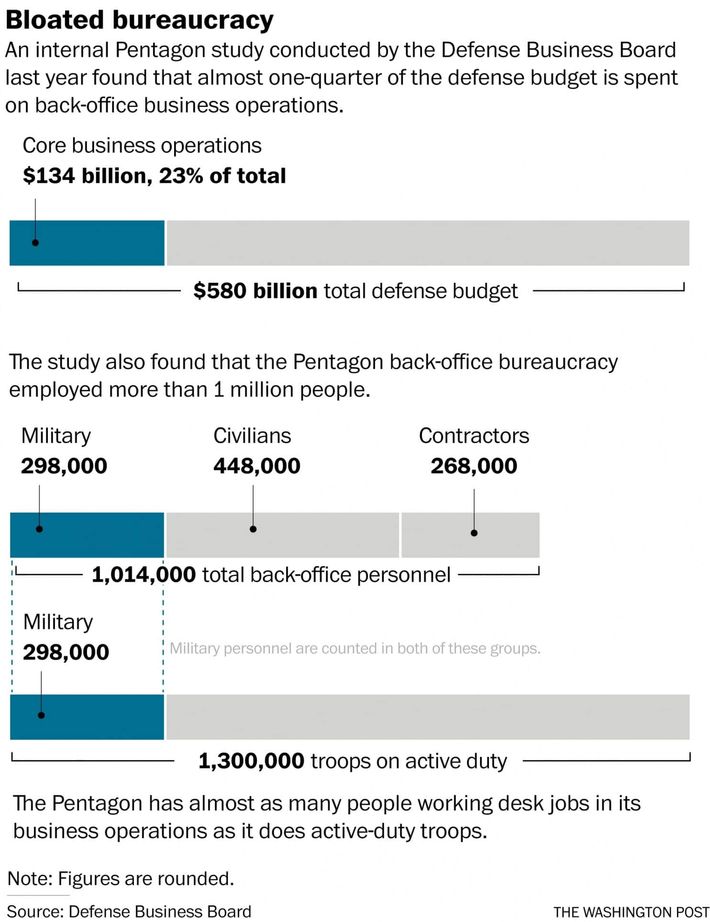 And a new report from Politico suggests that “giving the Pentagon unconditional increases in its financing, even if it wastes hundreds of billions on ill-conceived fighter jets, unnecessary pencil-pushers, and large-scale Middle Eastern wars that accomplish little beyond increasing Iran’s regional influence” has not been an effective way to persuade the Defense Department to get thriftier:

One of the Pentagon’s largest agencies can’t account for hundreds of millions of dollars’ worth of spending, a leading accounting firm says in an internal auditobtained by POLITICO that arrives just as President Donald Trump is proposing a boost in the military budget.

Ernst & Young found that the Defense Logistics Agency failed to properly document more than $800 million in construction projects, just one of a series of examples where it lacks a paper trail for millions of dollars in property and equipment. Across the board, its financial management is so weak that its leaders and oversight bodies have no reliable way to track the huge sums it’s responsible for, the firm warned in its initial audit of the massive Pentagon purchasing agent.

… In one part of the audit, completed in mid-December, Ernst & Young found that misstatements in the agency’s books totaled at least $465 million for construction projects it financed for the Army Corps of Engineers and other agencies. For construction projects designated as still “in progress,” meanwhile, it didn’t have sufficient documentation — or any documentation at all — for another $384 million worth of spending.

The agency also couldn’t produce supporting evidence for many items that are documented in some form — including records for $100 million worth of assets in the computer systems that conduct the agency’s day-to-day business.

Technically, this audit is an indictment of the Pentagon’s bookkeeping, not of the wastefulness of its spending. But if the Departments of Education, Housing and Urban Development, or any other agency whose mission does not involve incinerating people overseas, admitted that it couldn’t be sure how it had spent hundreds of millions of dollars — but was certain that the money had been well spent, and that billions in new funding were needed — it is inconceivable that congressional Republicans would take the bureaucracy’s word for it. It’s true that a few Republicans on Capitol Hill have evinced some concern with the Pentagon’s shaky accounting, Senator Chuck Grassley among them; but virtually none believe that Congress should turn off the funding spigot until the military gets its books in order.

From this, it seems reasonable to conclude that most Republican lawmakers have no sincere opposition to government waste per se. They just want to defund agencies staffed with left-leaning civil servants, and to use “waste, fraud and abuse” as an excuse for cutting government aid to the poor. If a couple hundred dollars of taxpayer money is given to a poor person who doesn’t actually qualify for the EITC, that’s a crisis. If hundreds of billions are spent on unnecessary weapons programs and construction, then Republicans (and many Democrats) can pat themselves on the back for giving their campaign donors a major return on investment. And the post-9/11 bipartisan consensus for an ever-growing military budget ensures that voters will never punish them for participating in such graft. 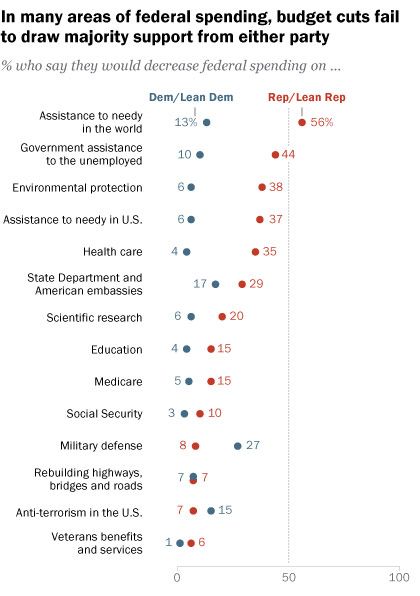 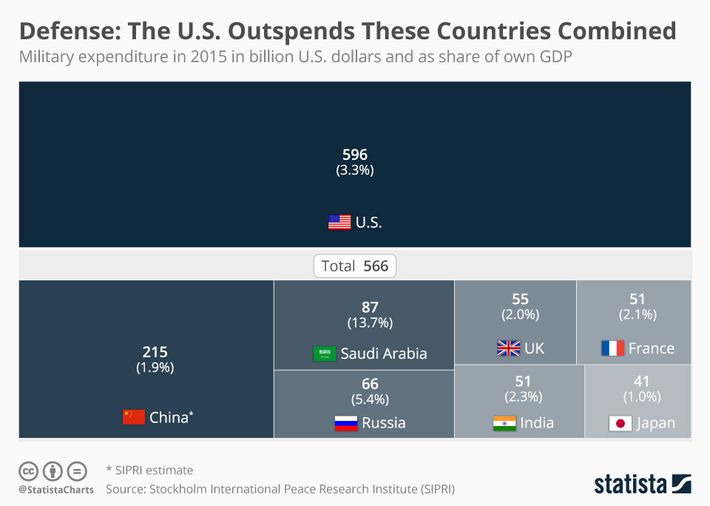 Even the most liberal members of the Democratic Party are reluctant to call for cuts to military spending. But if the progressive movement is ever going to build sustainable systems of universal health care, child care, higher education, and affordable housing, someone is going to have to start making the case for butter over guns (beyond, ya know, Donald Trump, circa the Republican primary).