One of President Trump’s favorite methods to defend his innocence in the Russia investigation is to claim that any piece of evidence that does not explicitly assert his guilt is in fact evidence of his innocence. Trump has been applying this method to the intelligence community’s assessment of Russian election interference. The report steered clear of the unanswerable question of whether Russian intervention moved enough votes to hand Trump the electoral college, because neither intelligence analysts nor anybody can measure just how many votes were changed by developments on the campaign. Trump has repeatedly lied that the report made a positive case that Russian interference made no difference. It is exactly like saying Trump was cleared by the Warren Commission because the Warren Commission report makes no conclusion about Trump and Russia.

Trump repeats this method for the indictments handed down today by Robert Mueller. The charges are focused on an aspect of Mueller’s investigation that is — at least at the moment, and perhaps permanently — peripheral to Trump. Mueller is charging Russians who engaged in social-media activism to help elect Trump. That is not the only thing Russia did to help Trump. (It also stole Democratic emails.) Nor is this the only source of potentially illegal connections between Russia and Trump. In other words, this particular indictment probably has nothing to do with collusion. As Chris Strohm reports, Mueller is continuing his probe and he and his prosecutors “have not concluded their investigation into whether President Donald Trump or any of his associates helped Russia interfere in the 2016 election.”

Trump’s defense is simply to pretend it is an investigation of his campaign and he’s somehow been cleared: 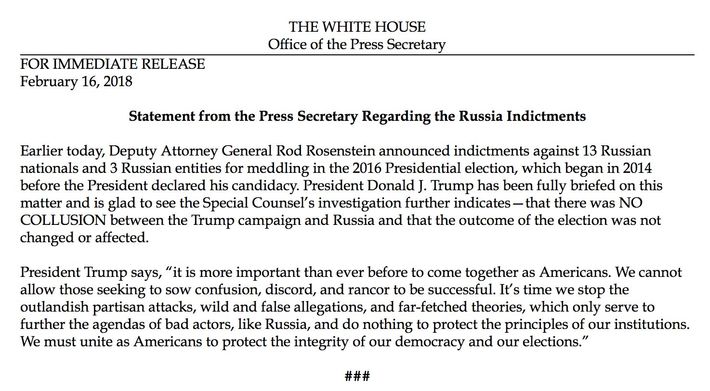 Literally nothing like this is found in the indictment. It does not say there’s no collusion. It simply addresses an aspect of Russian activity that may not have entailed collusion. And if you expected the president to make an argument more sophisticated than this extremely simplistic and obviously false denial, which treats an indictment of something other than collusion as proof there is no collusion, then you probably haven’t been paying attention.