By now, you probably know what the deal with Cambridge Analytica is. The right-wing-billionaire-funded consulting firm gathered data on 50 million Facebook users by getting 270,000 users to grant them access. That’s because, for a long time, Facebook’s API let users grant permission to apps, which allowed the apps to browse Facebook in the same way the user would.

In other words, if you granted a particularly invasive app permission, it would be able to see not just your profile, but the profile of anyone you had access to. Your friends’ profile photos, where they went to school, their phone number, and so on. Kinda nuts that your friends could just unthinkingly share your personal data, but Facebook is a kinda-nuts company.

Anyway, one of my cool hobbies in this ridiculous digital age is that I check my Facebook privacy settings every month or so because the company has a habit of tweaking how things work on a granular level without highlighting the changes. So, in the wake of the Cambridge Analytica stuff, I’d like to introduce you to the wildest thing I’ve ever seen on Facebook: a subsection called “Apps Others Use.”

Head on over to your Facebook application settings, and you’ll see a fun summary of every software program that currently has its hooks sunk into your Facebook profile. Below that is an innocuous box called “Apps Others Use,” with this brief description: “People who can see your info can bring it with them when they use apps. Use this setting to control the categories of information people can bring with them.” Click the edit button below it.

This screen pops up: 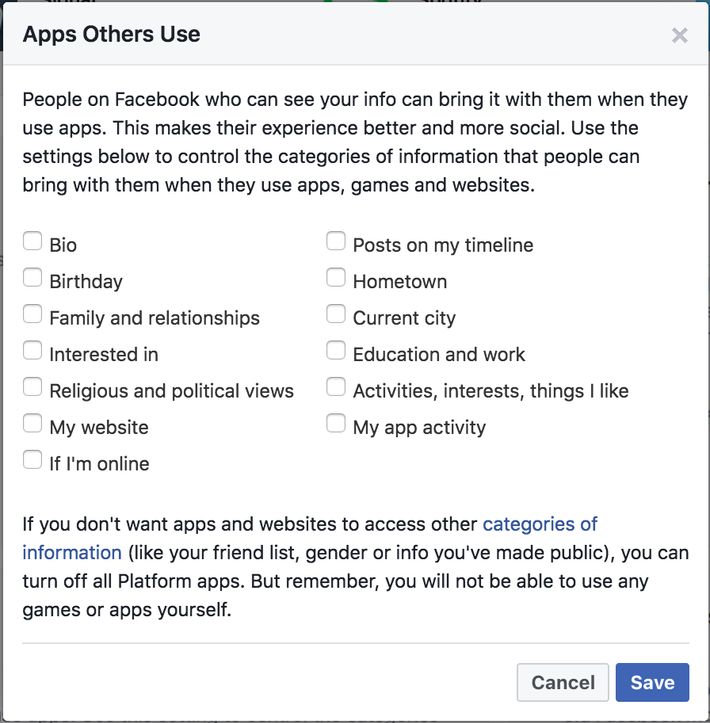 Isn’t that fun! Look at all of the data your friends have been able to give up about you, without them or you even knowing.

I recommend unchecking every single one of those boxes. If you want an extra step of security, check out the section called “Apps, Websites and Plugins” to disable Facebook’s third-party integrations altogether. This will make you unable to link your Facebook profile to any other apps (including the Facebook-owned Instagram); it won’t necessarily make Facebook or the app forget that you had once created those links.