You probably already know this, but the president, Donald J. Trump, loves to get mad online. Here he is getting mad online this morning:

The new Fake News narrative is that there is CHAOS in the White House. Wrong! People will always come & go, and I want strong dialogue before making a final decision. I still have some people that I want to change (always seeking perfection). There is no Chaos, only great Energy!

Now, if you are a person with a normal brain, you’re assuming the president is referring to the high rate of turnover in his administration, and a series of recent news events that might indicate that not everything is going okay in the White House. Last week, communications director Hope Hicks resigned; this week, former campaign staffer Sam Nunberg went on TV and, well, I’m not sure how else to put this, said a bunch of crazy shit. The president chews through staffers like he chews through overcooked steak: vigorously and confidently. By any conventional definition, the White House is chaotic.

But was he talking about the White House? Travel with me down here, to galaxy-brain land, and I’ll tell you what the president was really talking about: 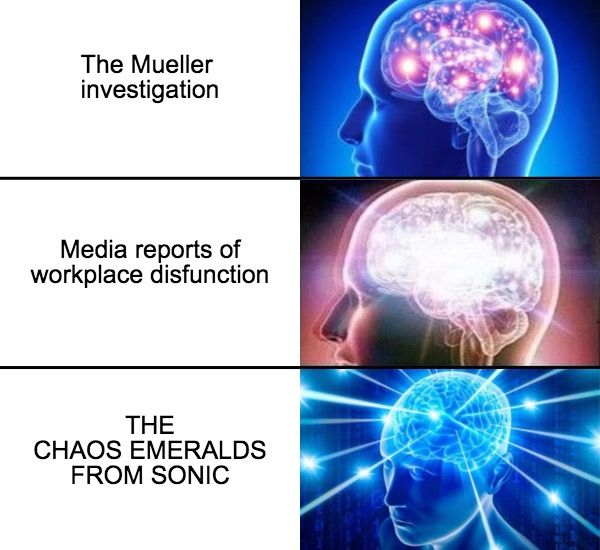 The president was talking about the Chaos Emeralds, a set of gemstone power-ups from the beloved Sonic the Hedgehog video-game series. For years, unbeknownst to the mainstream media, the Chaos Emeralds have played a pivotal role in the American presidency, the cause of strife and struggle for the better part of a decade, as our commanders-in-chief have struggled to wield their enormous power.

How do I know this to be true? Travel back in time with me to the year 2010, when a user named Cy-Fox posted a genre-bending piece of fanfiction, “Immortality Protocol Cy-Fox: Book 01,” on a forum devoted to Sonic the Hedgehog.

In the story’s prologue, then-president Barack Obama, ambassador Susan Rice, and the rest of the Security Council are briefed on a scientific anomaly at CERN by Dr. Nathan Morgan.

“Do you have any theories at least?”

“Try me,” Obama thinly smiled. Morgan had the feeling that the president’s eyes were boring through his skull. He had the complete attention of one of the most powerful people on the planet now, and it made Nathan’s hands sweat.

“We were testing several artifacts that were seconded to us by the U.S. Air Force. We were told that their presence at CERN was to be considered classified, along with their origin.”

That final line, those incredible seven words, form the basis for a long-running, internetwide joke concerning the intersection of Sonic fandom and the most powerful political office in the world.

Though the story was published in 2010, it really came to prominence in the world of internet in-jokes in 2013, when the Twitter account @fanfiction_txt, which is devoted to tweeting out quotes from fanfiction, published that last line, without context. It now has over 57,000 retweets and 61,000 likes. “I didn’t have many followers at the time and within a week it blew up,” the account’s owner later wrote, taking credit for starting the Chaos Emeralds meme.

“Obama chuckled. ‘You mean the Chaos Emeralds?’” is, to me, the 21st-century version of Hemingway’s “For sale: baby shoes, never worn,” and only one word longer. It is impossible not to hear it in Obama’s voice, with his laughter. You see in your mind’s eye the amused grin on Obama’s face because he already knows the Chaos Emeralds intimately. After all, he is the president of the United States.

Naturally, forum users across the web set off to riff on the theme of Obama melding with the Sonic universe. There were a number of photos featuring the president as Shadow the Hedgehog, a villain/anti-hero in the series often maligned for his aggressive attempts at being edgy. 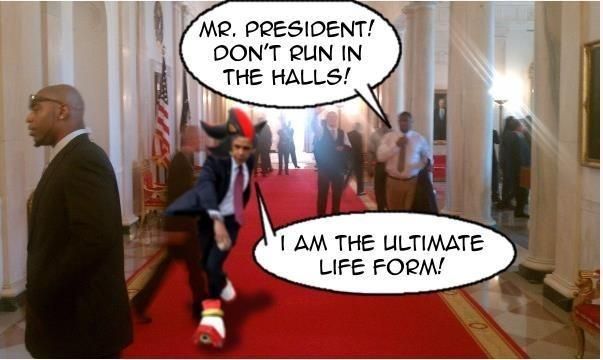 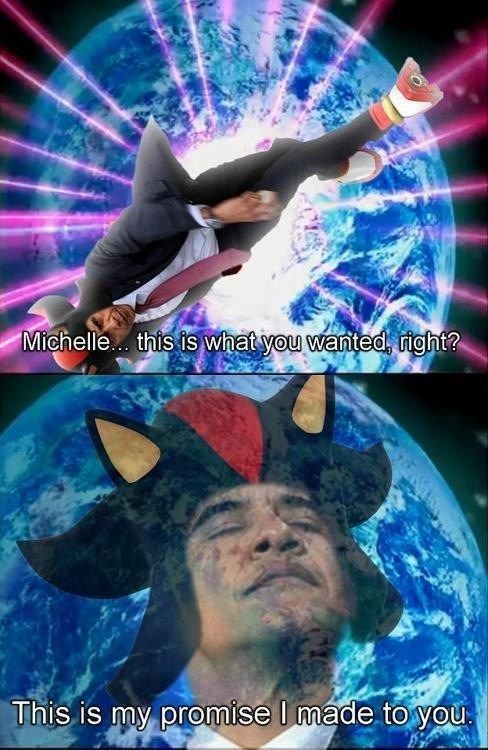 This image, an altered version of the photo that Obama tweeted on the night of his reelection, shows Obama in “Super Sonic” form, only possible by collecting all seven Chaos Emeralds. 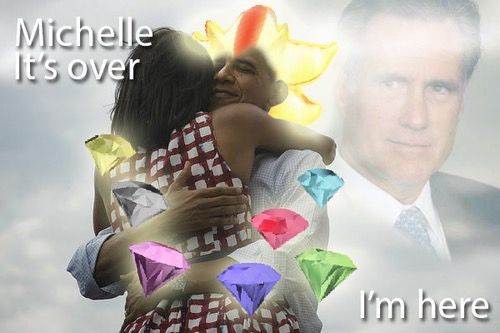 Some users took the joke even further. On Tumblr, user anjaroid produced an audio version of the exchange, imagining Obama chuckling about the gemstones and then pulling one out at a press conference and activating Chaos Control, “a Chaos Power that allows the user to warp time and space.”

The Tumblr post has since glitched and can no longer be listened to, but it lives on in various YouTube animations and tributes to Shadobama.

But now, we have a new president, a president even more susceptible to the allure of ostentatious and mystical precious stones.

How will President Trump wield the Chaos Emeralds? If the president’s tweets are any indication, he still has not harnessed their power. For now, a nation waits on pins and needles. 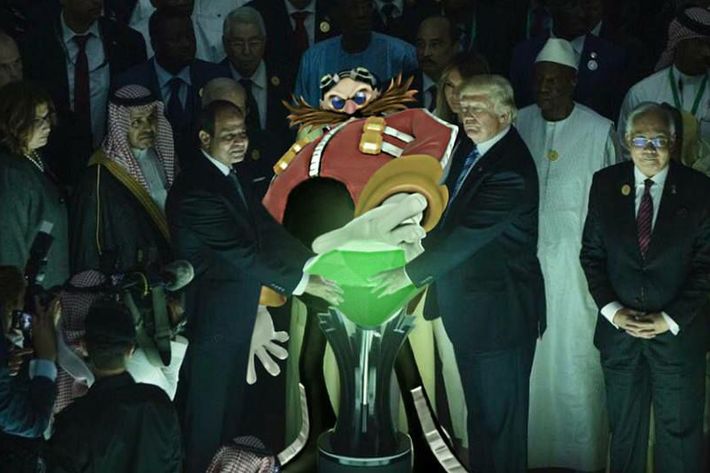 +Comments Leave a Comment
Is President Trump Tweeting About the Chaos Emeralds?