Sofia Hidalgo, 15, of Albert Einstein High School in Kensington, Maryland, and other students calling for Congress to act on gun control, demonstrate at the Capitol on February 21, 2018. Photo: Tom Williams/CQ-Roll Call,Inc.

For obvious reasons, the broadly liberal demographic trends in American politics have received much less attention since the 2016 election. Yet the fact remains that America is politically sorted by generations in a way it never has before. The oldest voters are the most conservative, white, and Republican, and the youngest voters the most liberal, racially diverse, and Democratic. There is absolutely no sign the dynamic is abating during the Trump years. If anything, it is accelerating.

The most recent Pew Research Survey has more detail about the generational divide. It shows that the old saw that young people would naturally grow more conservative as they age, or that their Democratic loyalties were an idiosyncratic response to Barack Obama’s unique personal appeal, has not held. Younger voters have distinctly more liberal views than older voters: 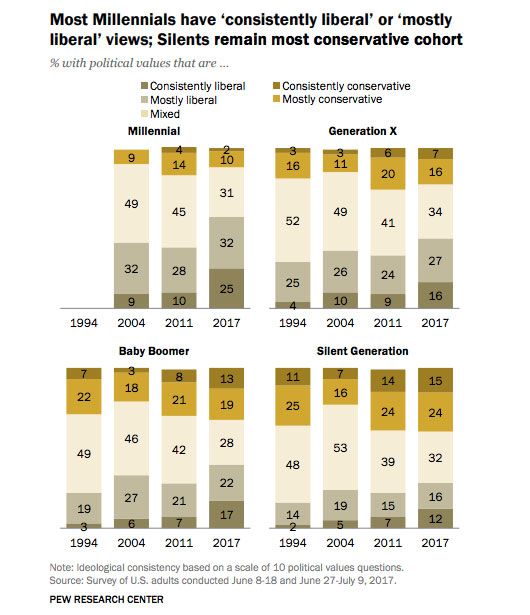 Correspondingly, the Democratic lean of millennial voters is as strong as ever: 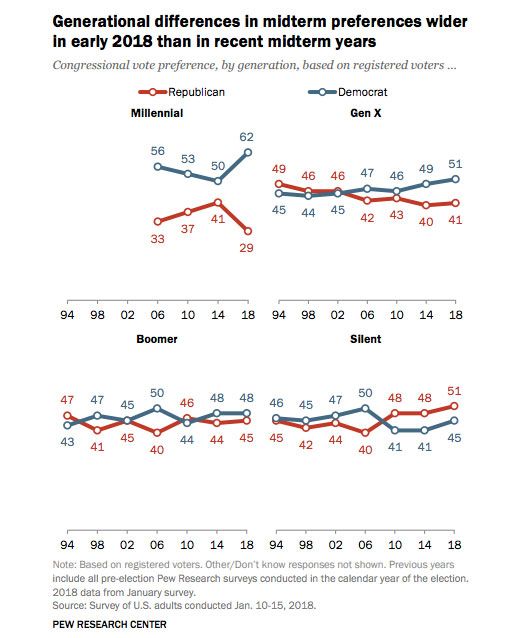 In the upcoming midterm elections, millennials are providing a huge share of the Democrats’ edge, with older generations splitting their vote relatively close: 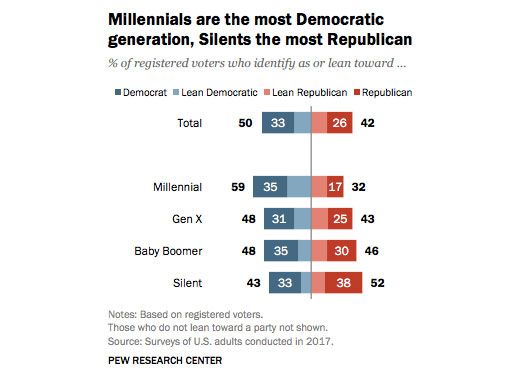 In previous elections, especially those without a president on the ballots, millennials showed up in far lower numbers than older voters. So far they indicate a much stronger interest in voting: 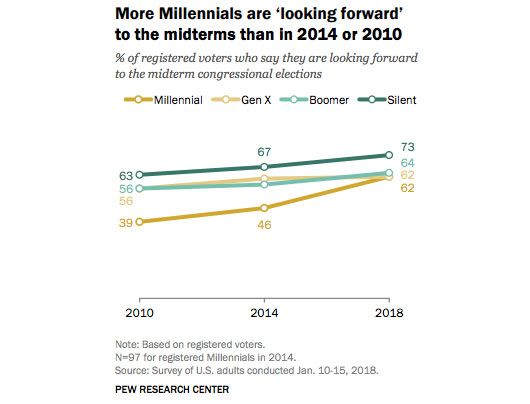 Democrats are benefiting from what political scientists call “thermostatic public opinion,” in which preferences about the size of government tend to swing in the opposite direction of which party controls the presidency. Some of the liberal trends in public opinion are a simple reaction to Trump. But there are also longer-standing trends on some social issues. Within generations, opinion on the role of immigrants is moving left and has been since early in President Obama’s first term: 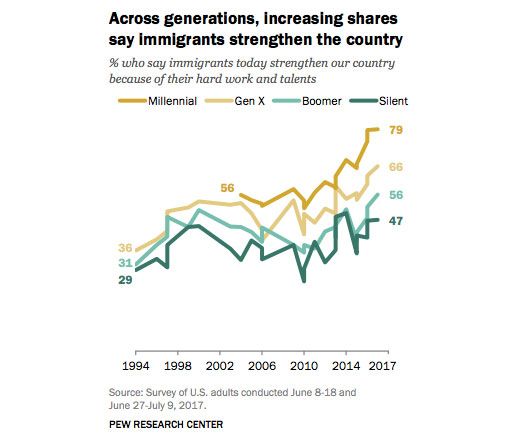 Likewise, opinions about race — and the degree to which racism plays an important role in holding back African-Americans — are also moving left. This is a triumph of activism by Black Lives Matter and other groups calling attention to racism: 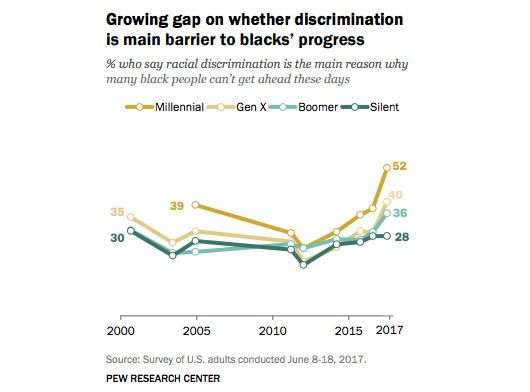 It is hard to focus on this trend at a moment when Republicans have full control of government, and are heading into an election where gerrymandering gives them a large advantage in maintaining Congress. But this fact runs headlong against a much longer deterioration of the conservative position within the electorate. Many conservatives supported Trump precisely because they were panicked about this trend. So far, Trump is merely accelerating the demise they feared.

THE FEED
1:01 p.m.
early and often
early and often
The GOP’s Heckles Were a Gift to Biden’s Reelection Campaign
By Eric Levitz
Republicans aired a primetime advertisement for their own extremity.
12:00 p.m.
artificial intelligence
artificial intelligence
Fear Not, Conservatives, the Chatbot Won’t Turn Your Kid Woke
By Eric Levitz
The American right’s problem isn’t that a talking robot is propagating liberal ideology.
11:29 a.m.
the talented mr. santos
the talented mr. santos
Mitt Romney Confuses George Santos for Person Capable of Shame
By Margaret Hartmann
After Romney confronted Santos at the State of the Union, saying he didn’t belong there, the lying congressman lobbed weak comebacks on Twitter.

9:01 a.m.
in the capitol
in the capitol
The Hecklers Have Won: The Polite State of the Union Is Dead
By Ben Jacobs
Marjorie Taylor Greene and other vocal Biden detractors turned it into something like a rowdy parliamentary session. Expect that to continue.
8:00 a.m.
games
games
Why You Should Root for the Eagles This Sunday
By Will Leitch
It’s not only because I don’t want their fans to come after me.
7:56 a.m.
early and often
early and often
Biden Springs Trap for Republicans in State of the Union
By Ed Kilgore
Biden vowed to “finish the job” in the next two years (or maybe the next term), and expertly used Republicans’ rowdiness against them.
2/7/2023
early and often
early and often
Democrats’ Huge Primary Shake-up Won’t Change the 2024 Race
By Ed Kilgore
Displacing Iowa and New Hampshire will generate a lot of drama. But it won’t matter if Biden is the nominee, and the new schedule may not stick.
2/7/2023
tremendous content
tremendous content
Melania Trump Was Mastermind Behind ‘Hero Dog’ Story
By Margaret Hartmann
Should Melania have been in the Situation Room for the al-Baghdadi raid? No. But her dog idea was no dumber than anything her husband did.
2/7/2023
bird talk
bird talk
Meet Brooklyn’s Newest Power Couple
By Matt Stieb
Recent bald-eagle sightings are delighting human visitors and terrorizing bird residents in Prospect Park.
2/7/2023
police brutality
police brutality
Two of the Cops Who Beat Tyre Nichols Had Records
By Matt Stieb
The Memphis Police Department severely lowered its qualifications for recruits in recent years.
2/7/2023
just asking questions
just asking questions
What Fresh Hell Is the New Bird-Flu Outbreak?
By Benjamin Hart
Epidemiologist Katelyn Jetelina on how to think about the virus’s recent worrying trajectory.
2/7/2023
poll position
poll position
Biden Is Trump (When It Comes to Popularity)
By Ed Kilgore
Biden hopes tonight’s State of the Union address will sway voters, but there’s growing evidence that opinions of any president are hard to move.
2/7/2023
early and often
early and often
Trump Wants to Divide Republicans and Conquer DeSantis
By Ed Kilgore
Nikki Haley is no threat to Trump, who would prefer a large field to muddy the track in his real primary race against Florida‘s governor.
2/7/2023
what we know
what we know
Horrifying Scenes of Quake Damage From Turkey, Syria Emerge
By Chas Danner
The powerful earthquakes have flattened thousands of buildings in the region, and the death toll continues to mount.
2/7/2023
foreign interests
foreign interests
Trump Is Too Tough on Balloons to Be Antiwar
By Eric Levitz
The ex-president is simultaneously slamming Biden for insufficient toughness on China and casting himself as a peace candidate.
2/7/2023
the city politic
the city politic
Are Eric Adams’s Big Plans for the City Still Too Small?
By Errol Louis
As he enters his second year in office, Adams is sticking with his grind-it-out approach to governing.
2/6/2023
what we know
what we know
U.S. Recovery of Alleged Spy Balloon Continues: Updates
By Chas Danner
China claimed on Monday that a second similar balloon seen over Latin America last week was also just a wayward civilian craft.
2/6/2023
tremendous content
tremendous content
Don Jr. Is Ready to Laugh About the ‘Trump Baby’ Balloon
By Margaret Hartmann
While the Chinese spy balloon is no more, its cranky little brother is getting pampered by the Museum of London, giving Trump’s son a chuckle.
2/6/2023
substation attacks
substation attacks
A Pair of Nazis Allegedly Wanted to Blow Up the Baltimore Grid
By Matt Stieb
The alleged plot is part of a surge in far-right extremists looking to take out the electrical grid.
2/6/2023
ftx fallout
ftx fallout
FTX Even Had a Woo-Woo Life Coach
By Matt Stieb
Sam Bankman-Fried hired his own psychiatrist to coach staffers about “happiness” and to encourage them to go on dates.
2/6/2023
the talented mr. santos
the talented mr. santos
Here’s Every Single Lie Told by George Santos
By Matt Stieb
Navigating the many exaggerations and falsehoods of New York’s newest representative.
2/6/2023
the national interest
the national interest
Michael Lind, Case Study in the Perils of Discourse-Poisoning
By Jonathan Chait
How an intellectual talks himself into believing the GOP is the left-wing party.
2/6/2023
just asking questions
just asking questions
Should a 13-Year-Old Have Bariatric Surgery?
By Benjamin Hart
Sandra Hassink on what the new pediatric obesity guidelines she co-wrote do and don’t say.
2/6/2023
the economy
the economy
America’s Labor Shortages Are Good, Actually
By Eric Levitz
The upside of longer lines and faltering customer service.
2/5/2023
early and often
early and often
Has Pete Buttigieg’s Dream Job Turned Into a Nightmare?
By Ed Kilgore
It turns out Transportation secretary won’t be a quick and easy layover on the way to higher office for Mayor Pete.