Robert Grossman died last week, at 78, and even if you don’t know his name you (and we) are a little visually poorer for his passing. Grossman was one of the distinctive visual voices of New York magazine, starting in its very earliest issues. “He had an intuitive sense of the relationship between cartooning and drawing and caricature and storytelling,” Milton Glaser, New York’s co-founder and original design director, recalls. “He was a kind of natural comedian, a joke-teller, and also had such a strong visual sense that his work was always of a sort that made you pay attention.” 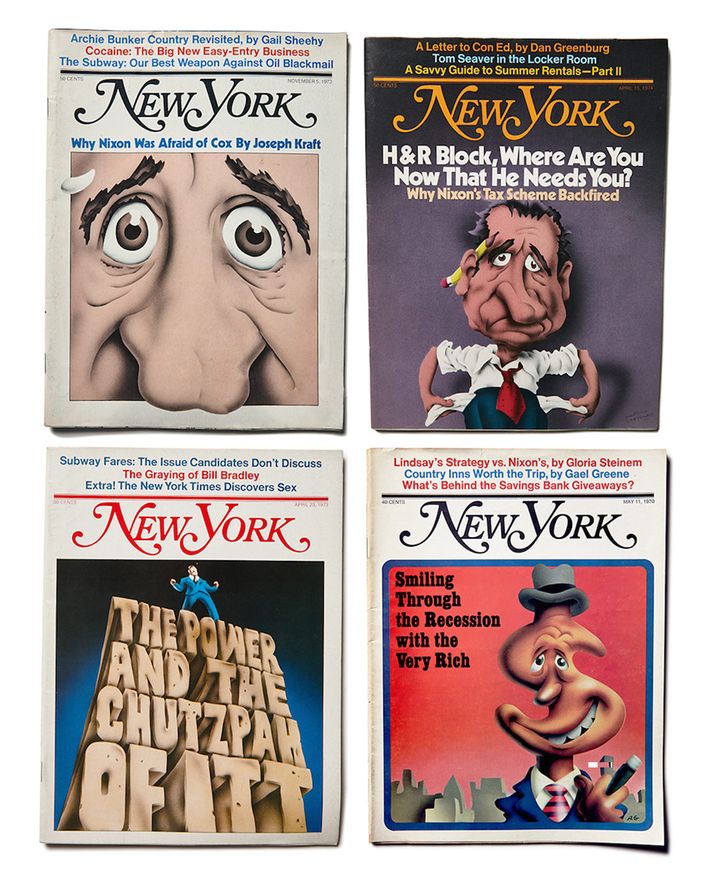 Born in Brooklyn, a product of Midwood High School and Yale, he lived in a Soho loft back then, and drew for everyplace from Time to the counterculture newspaper East Village Other. If he had a specialty, it was political caricature, and Glaser recalls that he could count on Grossman to deliver something strong, and sometimes better than that, overnight. That made him extra-valuable to a magazine that was at least partially driven by news, and (in its early days especially) was often produced in a terrible rush.

He drew nearly every New York power figure of that era, John Lindsay and Harry Van Arsdale and Ted Kheel, but if he had a recurring character it was Richard Nixon. Those jowls and fleshy folds were perfect fodder for Grossman’s airbrush and pen, and his Nixons, even at a remove from the news cycle they inhabited, are still delightful.

+Comments Leave a Comment
Remembering New York’s Great Illustrator Robert Grossman
THE FEED
9:30 a.m.
vision 2024
vision 2024
Joe Biden’s Actually Not-at-All-Bad Year
By Ed Kilgore
2022 could have gone so much worse for Biden. 2024 — and all the steps he must take to show he’s still electable — looms next.
2:28 a.m.
early and often
early and often
Trump Admits the U.S. Constitution Is Against Him
By Chas Danner
The former president wants to terminate the parts that prevent him from overturning his 2020 election loss.
12/3/2022
games
games
The U.S. Team Can Hold Their Heads High
By Will Leitch
Losing to the Netherlands was deeply frustrating, but the Americans’ best days are ahead of them.