A core premise of Donald Trump’s hit television show was that he is extremely good at making hiring decisions. This was also a core premise of his 2016 campaign: Whatever the real-estate mogul might lack in conventional qualifications for the presidency would be rendered irrelevant by his supreme talent for hiring “the best and most serious people.”

In his first 14 months on the job, the president hasn’t quite fulfilled that campaign promise. Trump began his tenure with a covert agent of the Turkish government as his top national security adviser, a neurosurgeon turned snake-oil supplements salesman as his head of Housing and Urban Development, and a 36-year-old real-estate heir — with no experience in government or policymaking — as his point man for veterans’ health care, criminal justice reform, government “innovation,” the Israel-Palestine conflict, and the opioid epidemic. Trump has himself evinced disappointment in his own personnel decisions, burning through senior staff members at a faster clip than any president in modern memory.

Meanwhile, the administration has left a historic number of lower-level administrative positions unfilled. And an unusually high percentage of the junior staffers whom they did hire have proven unable to pass FBI background checks, and/or been hastily escorted from the White House by security. 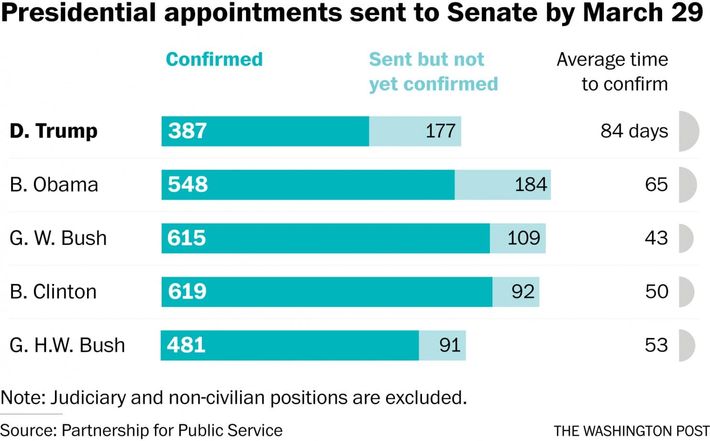 The fundamental causes of the Trump administration’s personnel woes have long been clear. Donald Trump is not an expert in business management, just a real-estate heir with a gift for media manipulation. He put Chris Christie in charge of staffing his administration when it still looked like that administration would never come to be — then abruptly fired Christie and threw out all of his work, shortly after winning the 2016 election. And Trump spent most of that campaign portraying virtually everyone with conventional qualifications for running a White House as members of a corrupt political Establishment that had betrayed the American people.

But on Friday, for the first time, we finally got some insight into the proximate cause of the White House’s personnel woes: The office in charge of staffing the White House is, itself, run by a historically small staff composed largely of 20-somethings with no relevant experience, a fondness for chugging Smirnoff Ice and vaping tobacco during office hours — and, in a few cases, forged résumés and criminal histories.

These revelations were brought to you by a hard-hitting, gut-busting investigative report on the state of Trump’s Presidential Personnel Office (PPO) published by the Washington Post Friday. The exposé is well worth reading in full, but here’s a quick rundown of its key findings:

• Under Trump, the PPO has never had more than 30 employees, which is less than a third of the number it had under his predecessors.

• Most of those 30 are under 30 years old, and have no political or management experience beyond involvement in the Trump campaign.

• That said, these staffers are, at least, extremely cool:

Even as the demands to fill government mounted, the PPO offices on the first floor of the Eisenhower Executive Office Building became something of a social hub, where young staffers from throughout the administration stopped by to hang out on couches and smoke electronic cigarettes, known as vaping, current and former White House officials said.

PPO leaders hosted happy hours last year in their offices that included beer, wine and snacks for dozens of PPO employees and White House liaisons who work in federal agencies, White House officials confirmed. In January, they played a drinking game in the office called “Icing” to celebrate the deputy director’s 30th birthday. Icing involves hiding a bottle of Smirnoff Ice, a flavored malt liquor, and demanding that the person who discovers it, in this case the deputy director, guzzle it.

• Some of the people in charge of vetting Trump’s appointments lied on their résumés, and have histories of drunken, disorderly conduct (not that either of those things should render them unemployable for life, but still seems noteworthy).

One of the newcomers was a former Trump campaign worker named Caroline Wiles. Wiles, then 30, is the daughter of Susan Wiles, a prominent lobbyist and political operative in Florida….The younger Wiles has an unusual background for a senior White House official. On a résumé she submitted to the state of Florida, she said she had completed course work at Flagler College in Florida. On her LinkedIn page, she simply lists Flagler under education. A Flagler spokesman said she never finished her degree … In 2005, she had her driver’s license suspended for driving while intoxicated, police records show. In 2007, she was arrested for driving while intoxicated and arrested for passing a “worthless check.

Another special assistant to the president is Max Miller, 29, a Marine reservist and former Trump campaign worker…Miller said he attended Cleveland State University from 2007 to 2011. A Cleveland State spokesman confirmed that Miller, who previously attended other schools, graduated in 2013… In 2007, he was charged with assault, disorderly conduct and resisting arrest after punching another male in the back of the head and running away from police, police records show…In 2009, he was charged with underage drinking, a case that also was later dismissed under a first offenders’ program. The following year, he pleaded guilty to a disorderly conduct charge related to another altercation in Cleveland Heights, Ohio. That episode was related to a fight involving Miller shortly after leaving a hookah bar at about 2 a.m. one morning. During the fight, Miller punched through a glass door, cut his wrist and left a trail of blood as he wandered off, a police report said.

• Since the most senior and experienced member of the personnel office came onboard, four of her family members have been given jobs at federal agencies. She insists this is a coincidence.

Since [75-year-old Katja] Bullock joined the Trump transition, four of her family members received political appointments to federal agencies. Her son became deputy assistant administrator at the United States Agency for International Development. His wife is a White House liaison at the Office of Personnel Management.

One of their sons serves as a “confidential assistant” at the Social Security Administration, agency records show. And another son received an appointment in February as a “staff assistant” at the Millennium Challenge Corporation, a U.S. foreign aid agency that works to end global poverty, agency records show. According to voter registration records, all four live in the same Kensington home.

THE FEED
3 mins ago
early and often
early and often
The GOP Can’t Remember Why It Took the Debt Ceiling Hostage
By Eric Levitz
Republicans are fighting Biden for the sake of fighting.
2/1/2023
politics
politics
Eric Adams’s Approval Rating Is Falling
By Nia Prater
Crime is the top issue for New Yorkers, and very few say it’s gotten better under his watch.
2/1/2023
early and often
early and often
Nikki Haley Is Taking on Trump 2024 (or Running for VP)
By Ed Kilgore
The South Carolinian is expected to announce her run later this month, but Trump has already staked a claim on her crucial home state.

2/1/2023
creature capers
creature capers
The Hunt Is on to Find the Dallas Zoo Bandit
By Matt Stieb
Police are looking for whoever is responsible in a strange crime wave in which animals have been killed and apparently stolen from the zoo.
2/1/2023
tremendous content
tremendous content
Watch Trump Repeatedly Plead the Fifth, Like a Mobster
By Margaret Hartmann
New deposition video shows Trump, who once said only criminals and “the mob” take the Fifth, asserting his constitutional right more than 400 times.
2/1/2023
politics
politics
There’s Another Push to Change New York’s Bail Reforms
By Nia Prater
Governor Kathy Hochul reaffirmed her intent to give judges more discretion in setting bail during her budget presentation Wednesday.
2/1/2023
the national interest
the national interest
The GOP Attack on Ilhan Omar Trivializes Antisemitism
By Jonathan Chait
Elevating Marjorie Taylor Greene exposes the hypocrisy.
2/1/2023
early and often
early and often
The Latest Hunter Biden Revelation Is a New Low
By Matt Stieb
Texts reportedly show he withheld an employee’s pay for sex.
2/1/2023
let it snow
let it snow
Our Long Local Snowmare Is Over
By Benjamin Hart
New York City finally saw some flakes stick to the ground on Wednesday morning. Better late than never.
2/1/2023
the big picture
the big picture
The End of ‘Zombie Neoliberalism’?
By Eric Levitz
There is burgeoning, bipartisan support for big government.
2/1/2023
the national interest
the national interest
It’s Republicans Who Won’t Negotiate Over the Budget Deficit
By Jonathan Chait
The other big lie in this hostage crisis is hiding in plain sight.
2/1/2023
the system
the system
The Government’s Telling Response to Tyre Nichols’s Death
By Zak Cheney-Rice
The reforms being considered would probably not have prevented his killing. But officials have gotten better at preempting outrage.
1/31/2023
the talented mr. santos
the talented mr. santos
Here’s Every Single Lie Told by George Santos
By Matt Stieb
Navigating the many exaggerations and falsehoods of New York’s newest representative.
1/31/2023
life after roe
life after roe
RNC Tells Republican Politicians to Stay Extreme on Abortion
By Ed Kilgore
The RNC passed a resolution scolding politicians who backed off after the end of Roe v. Wade and urging them to stay on the offensive in 2024.
1/31/2023
tyre nichols
tyre nichols
Eric Adams Defends Specialized Police Units Following Tyre Nichols Case
By Nia Prater
The New York mayor said that, while he did not want to second-guess the decision to disband Memphis’s SCORPION unit, “units don’t create abuse.”
1/31/2023
the money game
the money game
Jerome Powell’s Crazy Balancing Act
By Kyla Scanlon
The Fed chairman faces a big decision with the world watching. No one said his job would be easy.
1/31/2023
the national interest
the national interest
Why DeSantis Is on Track to Beat Trump
By Jonathan Chait
The main Trump alternative has learned the lessons of 2016.
1/31/2023
what we know
what we know
A Seventh Officer Has Been Suspended After Tyre Nichols’s Death: Updates
By Intelligencer Staff
The officer was relieved of duty the same day the five officers charged with murder were fired for the beating.
1/31/2023
games
games
The Lost Joy of Hating Sports Announcers
By Will Leitch
Self-righteous jerks like Billy Packer don’t exist on TV anymore, and that’s a shame.
1/31/2023
lost in translation
lost in translation
The Spy Who Wasn’t
By Paula Aceves
Baimadajie Angwang wanted a visa for his daughter. He got charged with being an “insider threat” instead.
1/30/2023
royals
royals
King Charles Is Ready to Trash Harry — or Declare a Truce
By Margaret Hartmann
Or Prince Harry is right about the U.K. press relentlessly peddling utter nonsense.
1/30/2023
politics
politics
Manhattan DA Moves Closer to Charging Trump Over Stormy Daniels Hush Money
By Nia Prater
Prosecutors have begun to present evidence to a Manhattan grand jury from their inquiry into hush payments made to Stormy Daniels on behalf of Trump.
1/30/2023
on with kara swisher
on with kara swisher
Kara Swisher on Mark Zuckerberg’s Never-ending Trump Problem
By Intelligencer Staff
She reflects on more than 15 years of covering Facebook and why bringing back Trump is a lose-lose.
1/30/2023
ftx fallout
ftx fallout
The FTX Investigations Are Getting Messy
By Matt Stieb
Prosecutors say SBF may have engaged in witness tampering. Meanwhile, Caroline Ellison and others aren’t cooperating in the bankruptcy case.
1/30/2023
early and often
early and often
Trump Won’t Go Away Unless a Republican Actually Beats Him
By Ed Kilgore
The 2024 invisible primary is well underway, and Donald Trump is winning it, wishful thinking aside.