One of the many odd features of American politics, circa 2018, is that the primary beneficiaries of our nation’s social safety net are also the core supporters of the party that wants to slash it. No age group derives a bigger benefit from our welfare state than America’s elderly; but no cohort is as susceptible to the cultural paranoia and racial resentment that sustain the modern right, either. Thus, conservatives can’t shrink “big government” without retaining the allegiance of the voters who stand to lose most from the erosion of social insurance.

The tensions inherent to this arrangement grew conspicuous during last year’s fight over Obamacare repeal — when congressional Republicans tried to pass a health-care bill that would have drastically increased the cost of health insurance for older, working-class voters in rural America (a core GOP constituency) while dramatically lowering premiums for 20-something city-dwellers (an overwhelmingly Democratic demographic). Many purple-district Republicans voted for the bill, anyway, effectively betting that it was more politically hazardous to thwart the ideological goals of their big-dollar donors, than to betray the material interests of their gray-haired voters.

This may have been costly mistake.

According to polling from Reuters/Ipsos, the percentage of college-educated white voters who say “health care” is their top issue rose from 8 percent in 2016 to 21 percent today; over that same period, the demographic went from favoring a Republican Congress by ten points, to backing a Democratic one by two. 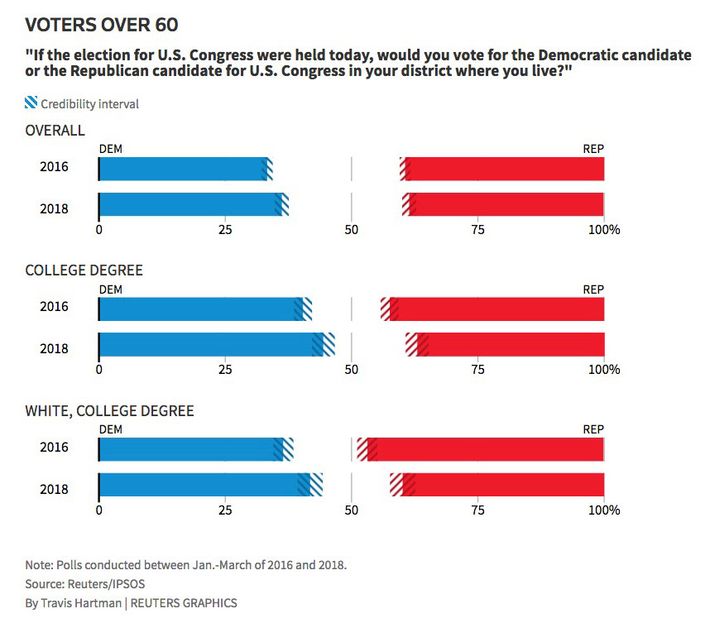 Of course, this shift isn’t solely the product of health-care politics. While older whites with college diplomas have swung left by 12 points since 2016, those without bachelor’s degrees have remained solidly in the GOP’s camp. If material self-interest were the only force pushing older whites out of the Republican tent, one might expect “working class” elderly whites to be leading the exodus. Nevertheless, the Ryan agenda does seem to have played a role in alienating college-educated white Republicans, whose educational backgrounds already rendered them a less-than-ideal audience for Trump’s anti-intellectual shtick. As Reuters reports:

John Camm has been a Republican since the Nixon Administration, but the 63-year-old Tucson accountant says he will likely support a Democrat for Congress in November. He is splitting with his party over access to health insurance as well as its recent overhaul of the nation’s income tax system. He also supports gun control measures that the party has rejected.

“I’m a moderate Republican, and yet my party has run away from that,” Camm said. “So give me a moderate Democrat.”

… Voters between the ages of 60 and 65 are particularly worried about healthcare, said Brigid Harrison, a political scientist at Montclair State University in New Jersey, because they are paying ever higher private health insurance premiums and are not yet eligible for Medicare.

Polling on this fall’s elections have consistently demonstrated that the Democratic base is more energized than the Republican one. In the face of this grim data, Republicans have sought consolation in the fact that core Democratic constituencies (like nonwhite and younger voters) have historically failed to turn out for midterms in high numbers. But the Democrats’ turnout advantage in the past year’s special elections put a dent in that hope — and the leftward lurch of elderly whites all but eviscerates it. Older, college-educated whites are among the most reliable voters in the nation. And in many of this fall’s most competitive districts, such voters account for nearly 10 percent of the population, according to Reuters’ analysis. Republicans were already at risk of losing the House due to shifts in turnout patterns, alone — but if those shifts are accompanied by significant defections among reliable GOP constituencies, the party could suffer historic losses up and down the ballot.

“The real core for the Republicans is white, older white, and if they’re losing ground there, they’re going to have a tsunami,” political scientist Larry Sabato told Reuters. “If that continues to November, they’re toast.”

Remarkably, even as Republicans have lost ground with this key demographic — and Democratic candidates have won improbable special election victories while painting their Republican opponents as enemies of Medicare and Social Security — Paul Ryan has persisted in calling for sweeping cuts to entitlement spending. Meanwhile, House Republicans are preparing a symbolic vote on a “balanced budget” amendment — a gesture meant to appease die-hard fiscal conservatives, but that seems just as likely to help Democrats put a spotlight on the potential costs of the Trump tax cuts to ordinary Americans, not least those who are relying on Uncle Sam’s largesse to get them through their golden years.