In its beginnings the RTL movement was heavily concentrated among Catholics. Not so much any more. Photo: Janet Knott/Boston Globe via Getty Images

Looking at an article in the Washington Post about the frenetic activity in many states since 2010 aimed at enacting abortion restrictions, some in order to set up a legal challenge to Roe v. Wade, the American Prospect’s Harold Meyerson noticed a pattern, which he discussed in a subscription email to readers that I happen to receive.

Thirty-three states have enacted abortion restrictions since [2010], while just 17, plus the District of Columbia, have not.

In sum, the relationship between the number of Catholics in a state and the intensity of the state’s anti-abortion policies is completely inverse.

This fact might come as a surprise to people who still think of Catholics as the bedrock core of the right-to-life movement, as they undoubtedly were in the days immediately following Roe.

In fact, Catholic public opinion on abortion policy (as on most political topics) is pretty close to that of the country as a whole, which means marginally pro-choice. Here’s how the Public Religion Research Institute put it in a 2015 survey:

A more recent survey from Pew showed Catholics favoring the “legal in all or most cases” position by a slightly slimmer 48/47 margin. Both surveys showed that white Catholics — i.e., those significantly more likely to identify with the anti-abortion Republican Party — were more likely to be pro-choice than overwhelmingly Democratic Latino Catholics.

This is not — repeat, not — to say that there aren’t a lot of passionately active RTL adherents in the U.S. Catholic ranks, who can rely on the consistent support of the hierarchy and the Vatican (and yes, despite some RTL angst about his recent statement that defending the poor was as important as defending the “unborn,” Pope Francis hasn’t given much aid and comfort to pro-choice Catholics).

But there’s no question the religious community that is far more solidly in the anti-abortion camp is white Evangelical Protestants. In a 2017 survey that broke out this particular segment of the population, Pew found that 70 percent of white Evangelicals thought that all or most abortions should be illegal. Less than half of Catholics (44 percent), black Protestants (41 percent), white mainline Protestants (30 percent), and the unaffiliated (17 percent) agreed with this position. 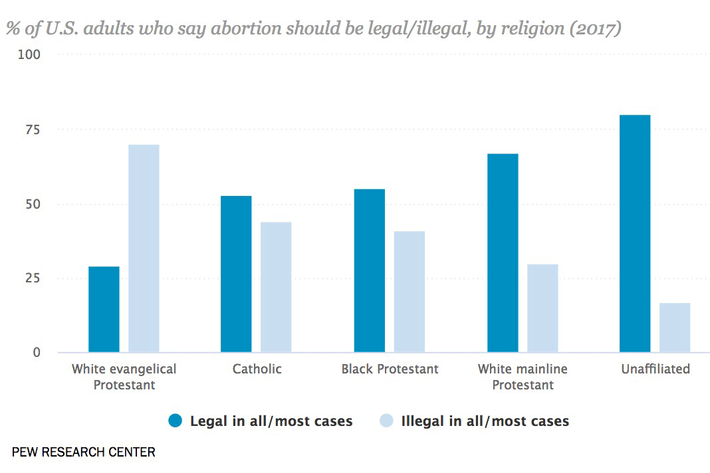 This is remarkable in no small part because unlike Catholics, white Evangelicals have little traditional investment in the anti-abortion cause. They have no formal hierarchy, no teaching tradition, no papal encyclicals, and no “natural law” philosophy leading them in the direction of regarding abortion as grievously sinful. They purport to follow only the Bible, which never mentions abortion and only obliquely refers to fetal life. Evangelicals, moreover, were not as a group actively engaged in state efforts to keep abortion illegal prior to Roe; many (particularly among Southern Baptists, the largest white Evangelical denomination) favored “liberalized” abortion laws back then.

However you choose to explain the white Evangelical shift toward strongly anti-abortion views — as a moral “awakening” after Roe; a general rejection of liberalism and feminism; a nostalgic embrace of cultural conservatism in all its elements (including patriarchy); or a byproduct of a growing alliance with conservative politics — it’s unmistakable, and it has offset the gradual drift toward pro-choice views among Catholics.

Getting back to Meyerson’s observation, most of the states he notes as having small Catholic populations along with virulently anti-abortion policies also have large white Evangelical populations (there’s also Utah, with an LDS majority that is culturally conservative and also has a strong church hierarchy doctrinally opposed to abortion). And not coincidentally, they all (with the partial exception of Virginia) are currently Republican-run states.

The polarization of the two parties on abortion policy stems from multiple sources, but none is so powerful as the shift in the anti-abortion “base” from a Catholic population that is more or less split down the middle between the two parties (and if anything leans Democratic) to a white evangelical population that has become aligned with Republicans on a broad range of issues from civil rights to taxes to “size of government” to the cultural issues like abortion and LGBTQ rights that we associate with the Christian right.

So the archaic view of abortion as primarily a “Catholic issue” needs updating for those who want to understand why some places are so hospitable to anti-abortion politics. It will matter even more if Donald Trump gets another SCOTUS nomination and we face the possibility of a post-Roe world where the very existence of reproductive rights depends on where women live.

+Comments Leave a Comment
Evangelicals, Not Catholics, Are Now the Pro-Life Base

THE FEED
20 mins ago
politics
politics
New Draft Congressional Map Is Far Less Favorable to New York Democrats
By Nia Prater
The proposed map has 15 Democratic-leaning districts, five Republican-leaning districts, and six competitive ones.
12:59 p.m.
early and often
early and often
2022 Midterms: A Guide to the Races Worth Watching
By Ed Kilgore
A cheat sheet to keep track of all the crucial races, primary upsets, and campaign drama — Trump-fueled and otherwise — from now through Election Day.
12:58 p.m.
ukraine invasion
ukraine invasion
You Won’t Be Able to Get a Big Mac in Moscow Ever Again
By Benjamin Hart
McDonald’s is pulling out of Russia entirely as Putin’s invasion of Ukraine drags on — ending an era that began with promise.

12:32 p.m.
the national interest
the national interest
Yes, Tucker Carlson Shares Blame for the Buffalo Supermarket Attack
By Jonathan Chait
The white nationalist’s conservative allies mount an unconvincing defense.
11:21 a.m.
early and often
early and often
Pennsylvania Senate Candidate Fetterman Recovering From Stroke
By Chas Danner
The lieutenant governor said he is feeling better and that doctors told him he will make a full recovery.
9:00 a.m.
the money game
the money game
How Red States Are Trying to Snuff Out Green Investing
By Jake Bittle
Numerous states are launching a messy preemptive strike against so-called ESG efforts by the financial sector to move away from fossil fuels.
5/15/2022

11:21 a.m.
Pennsylvania Senate Candidate Fetterman Recovering From Stroke
By Chas Danner
5/15/2022
the city politic
the city politic
Why the Brooklyn Democratic Party Is at War With Itself
By Errol Louis
A fight over neighborhood patronage gigs has led to threats, insults, accusations, lawsuits, and an effort to oust the party’s first female boss.
5/15/2022

Finland, Sweden move closer to seeking NATO membership
—The Associated Press
5/14/2022
2022 midterms
2022 midterms
Trump Endorses Extremist Mastriano in Pennsylvania Governor’s Race
By Ed Kilgore
It’s a bit awkward, since the gubernatorial candidate’s “running mate,” Kathy Barnette, is threatening Trump’s Senate candidate Dr. Oz.
5/14/2022
life after roe
life after roe
Clarence Thomas Decries ‘Irreparable Damage’ of Roe Opinion Leak
By Chas Danner
The Supreme Court’s loudest proponent of eliminating the right to an abortion is worried about institutional legitimacy and civility.
5/14/2022
early and often
early and often
The Republicans Who Saved Trump After January 6
By Ben Jacobs
This Will Not Pass demonstrates how GOP leaders betrayed their conscience in the name of power.
5/13/2022
covid-19
covid-19
What We Know About All the Omicron Subvariants, Including BA.4 and BA.5
By Matt Stieb and Chas Danner
Two new strains, BA.4 and BA.5, are driving a surge of cases in South Africa and have been detected in the U.S.
5/13/2022
early and often
early and often
Why Both Sides Are Making the Term MAGA Great Again
By Ed Kilgore
Democrats are saying “MAGA” more because they badly want to identify the GOP with its unpopular leader. So, too, do many Republicans.
5/13/2022
early and often
early and often
Mike Pence to Campaign for Fellow Trump Traitor Brian Kemp
By Ed Kilgore
The two MAGA heretics are, in their own ways, trying to show that Trumpism without Trump has a future.
5/13/2022
sports
sports
Brittney Griner’s Detention in Russia Extended Another Month
By Nia Prater
The WNBA star has been detained in Moscow since February. The State Department has classified her as “wrongfully detained.”
5/13/2022
business
business
Is Elon Musk About to Bail on Twitter, or Just Negotiating in Public?
By Benjamin Hart
The world’s richest man announced that his purchase of the company was “on hold” Friday morning, then clarified that he’s “still committed” to it.
5/13/2022
early and often
early and often
Scott Pruitt Brags About Media Attacks on His Rampant Corruption
By Ed Kilgore
Trump’s EPA chief could barely draw a breath without doing something comically scandalous. Now he’s trying to ride his notoriety to the Senate.
5/13/2022
life after roe
life after roe
The Anti-Abortion Christians Who Became Pro-Choice
By Sarah Jones
Why did we change our minds?
5/12/2022
politics
politics
Feds Investigate Trump for Taking Top Secret Docs to Mar-a-Lago: Report
By Matt Stieb
The DOJ reportedly wants to know more about the classified documents Trump grabbed from the White House.
5/12/2022
early and often
early and often
Can Wild-Card Kathy Barnette Win Pennsylvania’s GOP Senate Primary?
By Nia Prater
The McCormick-Oz showdown has been upended by a little-known rival. Now the Establishment and parts of Trump World are trying to stop her.
5/12/2022
capitol riot
capitol riot
January 6 Committee Orders Kevin McCarthy and Republicans to Testify
By Matt Stieb
The House panel escalates its investigation in a major way ahead of public hearings.
5/12/2022
the national interest
the national interest
Why Senate Republicans Want to Save Money by Skimping on Vaccines
By Jonathan Chait
Fiscal conservatism as pathology.
5/12/2022
early and often
early and often
Mo Brooks May Survive Trump’s Betrayal in Alabama Senate Race
By Ed Kilgore
The representative sojourned on after Trump unendorsed him for alleged “wokeness.” Now he has a decent chance at making a GOP runoff.
5/12/2022
the national interest
the national interest
Biden Abandons the Obama Legacy on Charter Schools
By Jonathan Chait
The Education Department chooses teachers unions over poor kids.
5/12/2022
the money game
the money game
Madison Cawthorn’s Crypto Guru Goes Bust
By Matt Stieb
In the hyperworld of Miami’s crypto right, the “Let’s Go Brandon” coin sounded as good as gold.
5/11/2022
politics
politics
Trump’s D.C. Hotel Is Officially Kaput
By Matt Stieb
The capital of Trump’s conflict of interest empire has officially been sold for a reported $375 million.