According to James Comey, when he met with Donald Trump in 2017, the incoming president denied allegations that he had hired prostitutes to urinate on a bed once used by President Obama. Trump’s denial, according to Comey, leaned heavily on his claim that he never even spent the night in Moscow. Instead, claimed Trump, he “departed for New York by plane that same night.” 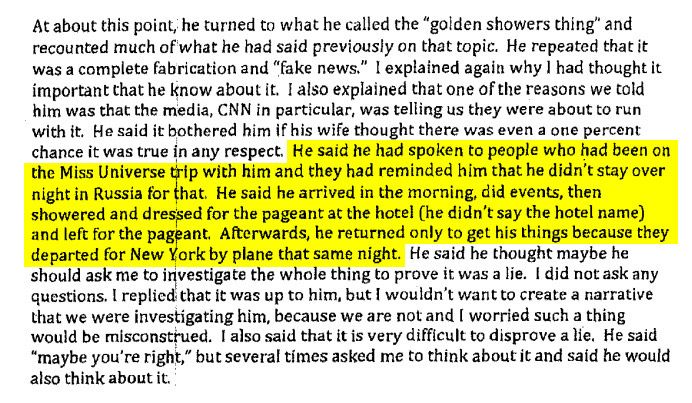 Reporting, combined with and social-media posts by Trump and his entourage during the trip, has cast a lot of doubt on Trump’s version of this story. Bloomberg News has obtained an additional piece of information disproving Trump’s alibi. Flight records show that Trump arrived in Moscow on early Friday morning, November 8, 2013. He departed early Sunday morning, November 10. Trump absolutely had enough time for a golden showers performance if he had wanted to have one.

It’s possible Trump misremembered the trip, or concocted a false alibi despite being innocent of the accusation. A more plausible account of his motives is that he lied because he was covering up his behavior. It is another piece of evidence for the Peelievers.